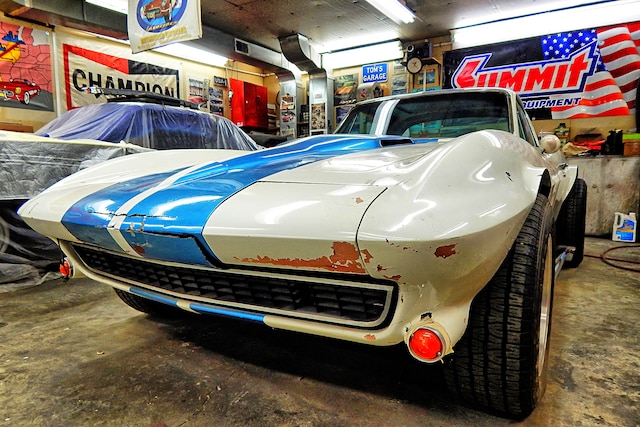 Tom Sammut (pronounced Sam-it) is leaning toward restoring this 1966 coupe to its stock configuration (425-horse, 427-cubic-inch, four-speed with 4.11 gears in a Posi). We’re asking Vette readers what they think he should do. Send emails to this column and we’ll pass them along to Tom and print a tally here. The 1966 coupe is an amazing discovery, as found in its racing configuration from the 1960s.

The first owner, Greg Schoenherr, bought this car new from Ver Hoven Chevrolet in Detroit in 1966 and flared the fenders for huge Ansen Sprint wheels (12x15 on the rear and 9.5x15 on the front), removed the emblems, repainted the body white, added racing stripes, and did a host of modifications to put the car on the track. He competed in gymkhanas, road racing, and drag racing until 1971, when he sold the Corvette to Tony Krause.

Krause continued racing the mid-year coupe until 1976, when he parked the Corvette. Then, a couple years ago he pulled the old gas tank and got the car running again. That’s when longtime Corvette enthusiast and restorer Tom Sammut noticed the wild Corvette at local cruise nights and the VFW show in Redford, a suburb of Detroit.

“He pulled it out of storage and was driving it as a race car. How he did that and not get in trouble, I don’t know,” Sammut said. Of course, a big-block with open header side pipes is very loud. That’s why Sammut was perplexed when Krause asked him one day about getting the radio fixed.

“You can’t hear the radio anyway,” Sammut said. When Krause said he was thinking about selling the Corvette, Sammut’s gut reaction was that he was interested.

During the next 3-4 months, Krause and Sammut went back and forth, but not on price. Krause wasn’t sure he wanted to sell the car after almost 40 years of ownership. Likewise, Sammut was tentative about buying the Corvette. He already had a half dozen mid-year Corvettes. In fact, when he finally did go to look at the car he told his friend that was with him, “I hope it doesn’t have the original motor cause then I could just walk away and say forget it.”

Sammut was in for a shock when he found the original engine, four-speed, 4.11 Posi rearend, plus all the paperwork. This one was too good to pass up.

“I didn’t know much about the car, just that he would come up to the cruise night in this flared-out, striped old race car, super loud, with sticky race tires and Ansens from the 1960s.”

Further inspection revealed everything on the car was from the 1960s, so modifications remain period correct. The Corvette was in the 1968 Detroit Autorama, as evidenced by vintage photos, all done up the way it is today.

Still, Sammut said to his friend, “Ask your sons. Maybe they want the car.”

Sammut did not “need” the car, but he “wanted” it.

“The day I went over there with the truck and trailer and the money, he is bringing all this stuff out of the house, the original spare tire has never been on the ground, everything they took off, you know to lighten the car up to go racing, the jack, the handle, the wipers, the hood grilles on the big-block hood, the ignition shielding, every piece that was taken off the car when it was brand new. He still had it. The first owner had it and gave it to Tony. Tony kept it. I bought the car and he gave all the stuff to me.”

Apparently, the Corvette was always raced, so should the 1966 be returned to the way the St. Louis assembly plant shipped the car to Ver Hoven Chevrolet or to its race car configuration, still all there, of the last 50 years? You make the call. Vette

The original owner, Greg Schoenherr is on the right in this photo from the 1968 Detroit Autorama. The nose of his 1966 Corvette race car is visible on the left.

The original window sticker reveals the single-purpose nature of this build, a sport coupe with the biggest engine option, four-speed and Positraction axle with 4.11 gears. The Ermine White paint is a great canvas for a race car build.

The 427 is the original numbers-matching big-block.

Another racing trick was to run hoses into the windshield washer bottle as a catch can for oil blow-by.

OK, custom headers with side pipes are wide open with no baffles, just like the ones GM used on the L88s in 1967.

The glovebox door still contains vintage stickers with names and dates of races, such as the Speedkhana at Waterford Hills on 6-9-68.

The interior is stock.

To go back to stock or go back to the way the car was raced, that is the question. What do readers think?