Leave it to Motion Performance to Pack 454 Inches of Pavement-Pounding Power in a 1974 Chevrolet Vega!

The Archives: King Kong is Living on Long Island 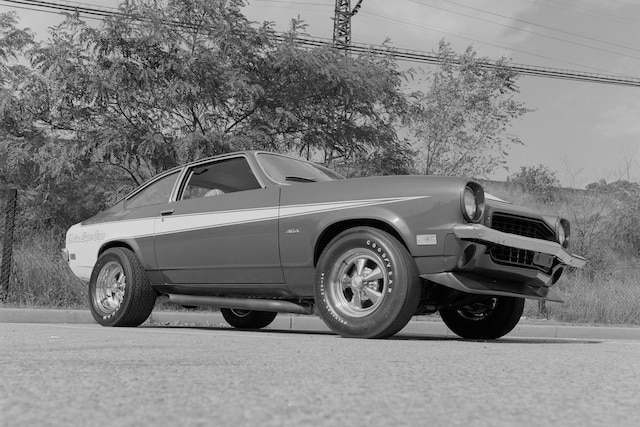 “The title sounds like bunk, you say? Well, what would you call a street Vega with a 454-cubic-inch big-block, Aunt Mary? That certainly might be foolhardy, especially behind the wheel; you’d have to whisper because, if the Vega heard, it might get mad and snap your neck at the next traffic light.”

With that evocative paragraph, Car Craft magazine’s Ro McGonegal introduced CC readers to a remarkable piece of 1970’s engineering: a Vega GT with a big-block transplant courtesy of Joel Rosen and the crew at Motion Performance on Long Island.

The Motion team was already converting Vegas to Chevy 350 power, but this car took things to the next level in a big way.

The size of the big-block, for instance, meant cutting the firewall around the bellhousing and precluded using standard side engine mounts. Instead, Rosen put in “a saddle-type front engine mount reminiscent of the ’62 and earlier Corvettes,” wrote McGonegal in the Jan. 1974 CC. “The back half of the engine, and the transmission, are supported by a standard V-8 Vega tubular crossmember, repositioned about an inch farther to the rear.”

Apparently this prototype was put together quickly to meet the magazine’s deadlines, so Rosen had to use “parts in closest proximity” to finish the job. That’s why the 454 was backed by a BorgWarner four-speed with a 2.64:1 First gear when Rosen believed “probably the best transmission for this car would be a Turbo 400.”

“Considering the brutal low-end torque of the solid-cam 454, the light weight of the car [about 3,100 pounds] and the limiting factor of even the largest street tires, the manual trans could be considered overkill,” said McGonegal. “Despite a totally untuned but otherwise ‘fresh’ engine, throttle response with the low gear, close-ratio transmission and 4.56:1 rear was devastating to the psyche. The car can be accelerated smoothly from rest in every gear but high, and full pedal shifts tend to break the tires loose all the way through high gear.”

He was shredding N50-15 Goodyears mounted to a narrowed 12-bolt rear that was located by Vega coil springs, Hi-Jacker air shocks, and Motion traction devices that replaced the stock upper and lower control arms. It takes a tire that big to make the F70-14 front tires look skinny. Rosen replaced the Vega’s front coils with springs from “his own private stock” with thicker wire diameter, and damped them with Koni adjustable shocks.

Despite the engine’s bulk, Rosen was able to retain the stock steering linkage. Not so the radiator, which was replaced by a custom core Motion had fabricated. Despite the purpose-built cooler and big Flex-a-lite fan, “the Rat motor has a tendency to spill water after 30 minutes of hot-weather stoplight traffic,” McGonegal pointed out. “This is probably due to lack of free air movement around the engine compartment and not an inadequate cooling system.” Venting the inner fender panels would help, he said, as would cutting open the Motion fiberglass hood.

Since the Vega had just been assembled, McGonegal opted not to put it to any timed acceleration tests. “With slicks and traction, it should be capable of at least high 11-second trips.”

McGonegal admitted “an all-purpose car the Motion 454 Vega is not.” But, he added, “as a boulevard cruiser, stoplight bandit, and ‘basic’ to-and-from-work transporter, Kong has it made. I mean, who’s going to mess with it?”

Photos by Ro McGonegal and courtesy of Petersen Publishing Archives