The Waiting Game: Kevin Smiglewski’s ’57 Chevy has been in the family for over 50 years 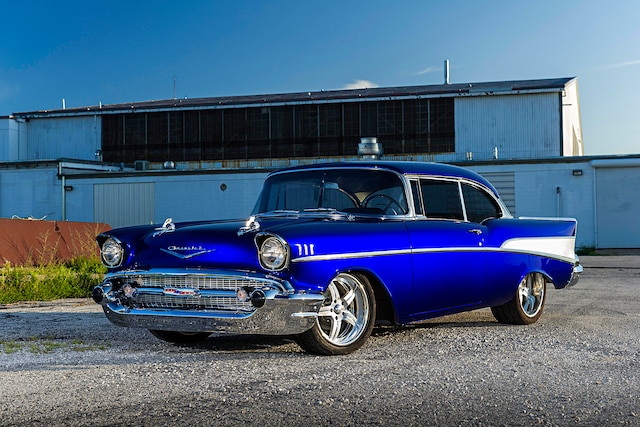 The speed bug is impartial to age, but there are certainly no known inoculations. Some of us contract the infection shortly after earning our driver’s licenses. Others, years after that. Then there are those like Kevin Smiglewski, who were born into a household of roddin’, racin’, and garage understudying pops. Smiglewski’s father’s 1957 Chevy set the stage early for what would be a lifelong love of cars. “I can remember riding in the ’57 in 1977,” he recalls. “I was 6.” It was love at first sight. When he was 10, his dad promised him the car, but it would be another 33 years before the elder Smiglewski was ready to hand over the reins.

The car’s entry into the Smiglewski family occurred in the mid-’60s when his parents purchased it from a used car lot for the unimaginable sum of $500. They drove it for several years before it transitioned into a competitive career. “My dad use to street race the hell outta that thing,” laughs Smiglewski. “He would dump the clutch on the Muncie four-speed and do burnouts all the way down the block.” At one point, the car was adorned with a HiPo 327ci small-block from a Corvette, and apparently held its own on the tough, Midwest blacktop.

When the ’57’s original paint began to turn sour, it was retired and the body was stripped down in preparation for a re-spray. It got a sanding touch and a spritz of primer, but that’s where the attention stopped. Daily life intervened and the car was put on hold while a young Smiglewski watched, daydreaming of his long off chance to own the Tri-Five. Time passed, and so did 30-plus years of Kansas City seasons. The icy tendrils of winter tore at the car’s factory sheetmetal and a smashed window, courtesy of some local ne’er-do-wells, further compounded the infecting rot.

Smiglewski was persistent. “I asked my dad for the car every five years,” he said. In 2014, his dad caved and the car was trailered to his Lee’s Summit, Missouri, home—a 43rd birthday present from father to son.

“It was aged Swiss cheese when I got it,” laughed Smiglewski, who knocked the car down to bare metal as soon as it arrived. “I wanted to know how bad it was. It was a turd!” That’s when he picked up the phone and made a call. On the other end of the line was Michael McLin of the Restomod Store. “He was a young guy but when I saw his work, I knew that’s who I wanted to build my car,” said Smiglewski.

He dropped the car off before the calendar month was through, and trusted that the team at the Independence, Missouri-based shop would deliver the ’57 he’d been waiting over 30 years for.

Once under the knife, the original body was patched up with repair panels and dropped over an Art Morrison Enterprises frame. A new age, independent front suspension, four-link rear suspension, and four Strange Engineering coilovers were chosen to provide the modern driving experience Smiglewski desired. A rack-and-pinion setup and ididit column provide buttery smooth steering, transcendent of the original box and link layout. Antiquated four-wheel drums were shelved in favor of four-wheel Wilwood disc brakes that shimmer behind 18x8 front and 20x10 rear Boze Alloy wheels.

Not a fan of “all-show, no-go” classic cars, Smiglewski requested a tried-and-true LS3 powerplant for his ride in progress. A Brian Tooley bumpstick adds additional lift and duration to the otherwise stock long-block, and a Top Street Performance intake directs air into the cylinders. Fuel injection is courtesy of an OEM Chevrolet system and provides the quick starts and smooth operation of a modern vehicle. The engine is dressed up with Eddie Motorsports and Kwik Performance accouterments, and is backed by a Circle D converter and a 4L60E transmission.

The Restomod Store fabricated a custom, stainless exhaust and redid the interior in a mostly stock style. Painless wiring is aesthetically tucked on its way to Dakota Digital gauges and Vintage Air A/C controls. Sali Hamami of the Restomod Store clad the interior in black onyx and red cloud leather with reproduction inserts. Soon enough, it was time for paint. The ’57 was sprayed in a custom mix of Axalta Blue, cut, buffed, polished, and treated to a pièce de résistance of smoked glass from Auto City Classics.

When the shop was content with the build and the final bolt was tightened, Smiglewski’s phone rang. It was finally done; the car he had been waiting for since childhood. “It was perfect. I love the way the blue and chrome pop.” Ready to hit the road, he took the original title in to get it registered. “No one at the DMV had ever seen anything like that,” he said. “They didn’t know what to do with it so they laminated it and gave it back!”

Finally home at the familial residence where it belongs, the waiting game is over and the next generation of Smiglewskis never hesitate to ask for a ride. “It’ll go to my son someday,” he said. Now, it’s his turn to wait. CHP