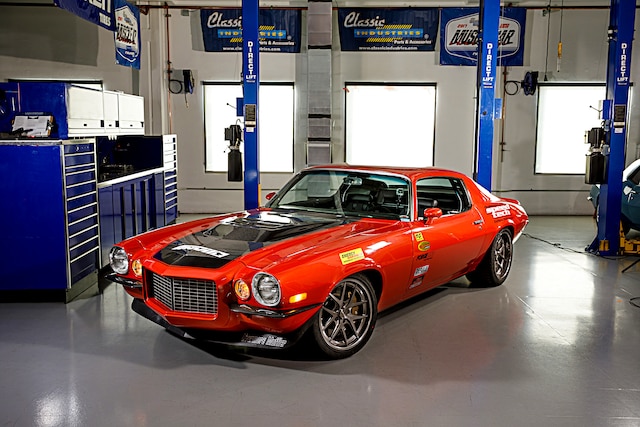 Nick Relampagos of Castro Valley, California, was on a roll. He was just finishing a 1970 Chevelle SS and one would think all was good with the world, but there was a problem. You see, the big-block that Nick finished wasn’t really what he wanted to end up with. Yeah, it had a TREMEC five-speed manual and a decent suspension, but the heavy 454 mill and large 19- and 20-inch rollers made it a pig, especially in the corners. As Nick told us, “I completed the build in 2012 and it was a great cruiser that we could take to car shows and cruises. But I never thought it was a Pro Touring car. It was more of a restomod car.” Again, that wouldn’t be a big deal except that Nick had been following the action at events like the Optima Ultimate Street Car deal and was getting an itch to get in on the action.

If he was going to be competitive he needed a whole new plan of action. “I went to the first event in Laguna Seca and was really impressed that there was an event that judged your car based on driving performance first and looks second. I knew my Chevelle wouldn’t be competitive unless I completely rebuilt it to handle well. About the same time, my friend was selling a 1970 Chevy Camaro he had stripped down but never found time to work on. I bought the car and came up with a game plan on how the car should be built: lots of horsepower, big brakes, six-speed transmission, mini-tubs for some wide 12-inch Forgeline rear wheels, lots of weight reduction, and safety gear like a rollbar,” recalled Nick.

Work began on the Camaro and first up was grafting in a set of Detroit Speed mini-tubs. Nick had never done them before, but after going through the directions and a few online videos, it was a walk in the park. From there, a call was made to the folks at Speedtech and, before long, a shiny new front subframe and rear torque arm suspension system was sitting in the shop and waiting installation. The front sub was an easy-peasy bolt-in deal, but the rear system required welding in the upper mounts along with trans tunnel mounts for the torque arm. Again, Nick was able to knock this out himself. For brakes, he went with tried-and-true GM Corvette pieces, and a quartet of JRi double-adjustable shocks rounded out the track-ready suspension.

With the car now a roller, Nick could turn his attention to the drivetrain. He planned on tracking his Camaro hard so he needed some serious grunt to keep up with the competition. He also knew that a little boost could go a long way toward upping the horsepower equation. With that in mind, he picked up a 6.2L (376-inch) LSA mill. M&M did the machine work, but Nick did the assembly of the massaged GM engine. A lite hone made room for a set of forged Lingenfelter 9:1 blower pistons. Synergy Motorsports spec’d a Comp stick with 278/295-degrees duration and 0.605/0.593-inch lift on a 114 LSA. Rounding out the valvetrain was a new set of GM lifters and 16 Brian Tooley hardened pushrods. The GM 1.8L Eaton-based LSA blower is fed by a CTS-V pump and churns out 15 psi of glorious boost; enough to push out 682 rwhp and 665 lb-ft of twist. Exhaust exits the party through a set of 1 7/8-inch Stainless Works headers that flow through a stainless system crafted by Livermore Muffler. And since power makes heat, especially on the track, there’s a massive C&R heat exchanger for the boost, a four-row Griffin for the H2O, and an 18-plate Derale cooler to rip some heat from the oil. Add it all up and it makes for a potent and reliable package. Behind the LSA sits the obligatory TREMEC Magnum six-speed mated to a Centerforce DYAD carbon/Kevlar 10-inch clutch encased in an SFI-rated Quicktime bellhousing.

Track time is all about the driver becoming one with the car, so the interior is just as important as the rest. Recaro Expert M seats keep Nick in place while a custom 1 3/4-inch rollbar, fabricated by Tobias Motorsports in Hayward, California, adds a bit more chassis stiffness along with a whole lot more safety. A 13-inch Driven steering wheel handles the directional changes while AutoMeter Pro-Comp Ultra-Lite gauges track what’s going on under the Anvil carbon-fiber hood. The custom stitchwork, including the mods to the Recaro seats, was done by DJ Designs in South San Francisco.

Originally, the Camaro was Hugger Orange and Nick wanted to stay with that hue but with a modern twist so Grand Collision in Hayward, California, shot the ride in PPG 2012 Chevy Inferno Orange. No body mods were done and Nick kept all the factory brightwork in place with the exception being the carbon-fiber bumpers. The extensive use of carbon fiber (hood, nose, wheelwells, radiator closeout panel, trunk lid, rear spoiler, and rear upper filler panel) knocked around 200 pounds off the Camaro and, as a bonus, gave it a unique look. Hey, there’s no rule that says you can’t go fast and look good doing it!

When our 2017 Classic Industries Super Chevy Muscle Car Challenge Presented by Falken Tires was shaping up Energy Suspension was looking for a ride to represent them in the challenge and Nick’s track-proven Camaro was a perfect candidate. He was running a host of their polyurethane parts and the car embodied Energy Suspension’s feeling that cars should be driven—preferably hard. As for Nick, you can find him running at the Optima Ultimate Street Car Series and as many autocross and open track days as he can find time for.