Financially irresponsible and worth it 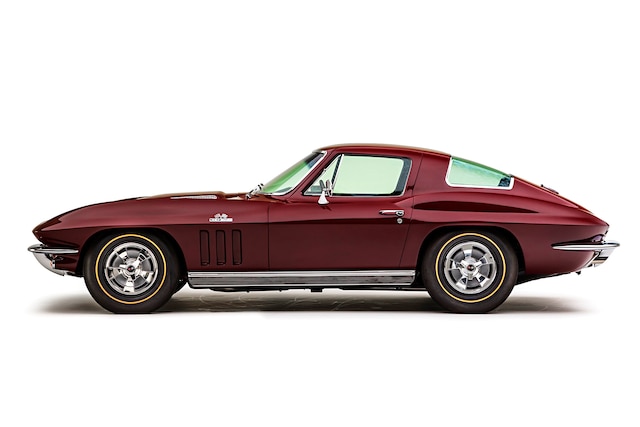 Have you ever made a decision you should regret but don’t? That’s a rhetorical question obviously, because whatever decision you are thinking of we probably don’t want to hear it. In direct contrast though, Peter Koretz made a potentially regrettable decision that was right up our alley: he purchased a 1966 Corvette. A 427ci, 425-horsepower numbers-matching 1966 Corvette to be exact. And while your financial advisor would never condone such irresponsible behavior, we are all about it. Really, where would our hobby be if people didn’t spend way too much time and money buying, selling and restoring dated automobiles?

But let’s take this tale back to its roots. Way back in high school, Koretz bought his first mid-year Corvette. It was a mostly incorrect 327/365 car with flared fenders, triple taillights and other typical period modifications. He loved the car, but obviously not more than life itself because he eventually sold it. Then prices started to skyrocket on C2 Corvettes and picking up another one became a difficult proposition. Over the years to come, Koretz ended up owning a few more mid-year Vettes, but none were quite the quality he really wanted. Furthermore, his career as a boiler operator at a brewery wasn’t one that could easily support a budget to include a high-quality classic car. But that didn’t stop him.

“It was always my goal to replace that car, but it was never affordable,” Koretz tells us. But then he got a little pay increase so he started looking around for another C2 Corvette. What he found was a spectacularly restored 1966 big-block car but it was way out of his budget. “I considered many other Corvettes but this one really stood out to me,” says Koretz. He continued, “My budget at the time was not nearly enough to be able to buy this car.” He first saw the car in an NCRS magazine and as his daydreams grew, so did his willingness to go over that original monetary limit. As Koretz puts it, “Common sense went out the window.” Obviously (unless you missed the first paragraph) he ended up purchasing the ’66 and doesn’t regret it one bit even though he tells us that “a completely irresponsible portion of my pay goes to this car.”

The concept of financial irresponsibility is not foreign to most of us in the hobby, but what may be is the fact that his wife, Ann, supported his decision 100 percent. Koretz is a lucky man, and he knows it.

But back to the Corvette. Its previous owner had the car in Pennsylvania and spent a good three years restoring the car in his basement. He went through every part of the Vette until it was just about perfect. So perfect, in fact, that at a regional event, the car was judged by the NCRS and received a 98.5 out of 100. Just about every part of the car is restored original parts, with the seats and dash being completely untouched original.

“This car represents a pinnacle of what I had always hoped the other cars would be,” Koretz said, referring to the other Corvettes he had owned over the years. So what was so special about this one? Beyond the impeccable restoration, the Corvette has a reasonably unique options list. “The car, when ordered new, was optioned with performance only in mind. The car has no power steering or brakes—not even a radio—just the biggest, most powerful engine, Muncie M21 four-speed and a 3.70 posi rearend,” said Koretz. It also has the beefed-up F41 suspension package, steel wheels and no power windows. We say reasonably unique because the car is pretty close to a full-on performance-oriented stripper model, but not quite. With no M22 Rock Crusher trans and no heater delete, the original owner seemed to just want a solid performer he could enjoy on a daily basis.

Its lack of a radio does make it pretty rare though, since just over 1,300 of the 27,270 Corvettes produced in 1966 were optioned without an AM/FM radio. The result is a very minimalist center console with nothing more than a couple of knobs to control the heater and defroster. And while the radio delete is rare, the Milano Maroon paint is not as rare and that’s completely fine with us because it sure looks good. In fact, Milano Maroon was the second most popular paint color in 1966, second only to Nassau Blue.

While a previous owner restored the Corvette, we do know—as mentioned above—that the only parts of the car not restored were the vinyl seats and dash. The rest of the car was completely rebuilt from the ground up. The engine and transmission got a rebuild and refresh, as did the F41 suspension with N.O.S. parts used in place of whatever was worn-out. A fresh coat of PPG Milano Maroon paint was sprayed on the Vette to give it a straight-from-the-factory look.

Now under the care of Koretz, the Vette sees plenty of action at shows all around California and Nevada. One of his proudest moments with the car in his two years of ownership was being accepted to The Quail: A Motorsports Gathering, which is part of Monterey Car Week in Carmel, California. He had put in an application just to see what would happen and the Corvette’s acceptance came as quite a surprise to Koretz, but he was proud nonetheless. At the event he was given the opportunity to show off his prized Corvette among other highly valuable collector cars of all makes and models.

Even though Koretz’s decision to go way out on a limb and purchase this 1966 Corvette might have been just a little irresponsible, its value is priceless. He loves the camaraderie that goes along with owning a classic car again. Owning this car gave him the chance to rekindle old friendships with other Corvette owners he’d known in years past and make new friends around every corner. So the moral of the story might be: what is good for the soul might not be good for the pocketbook and, sometimes, that is just fine. Vette