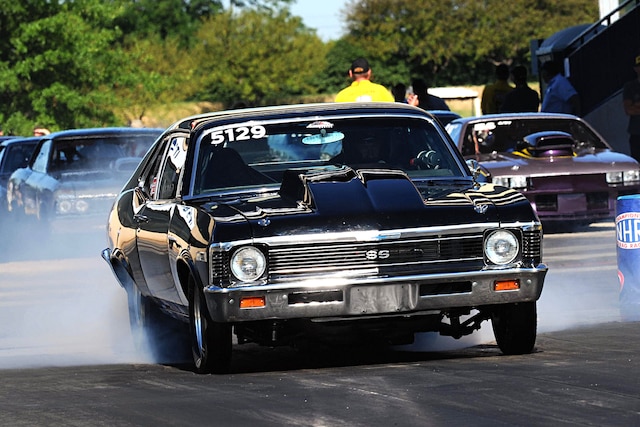 Garage B Project!
The state of Minnesota is home to the remarkable 1969 Chevy Nova SS owned by John and Lynn Helmin. The husband and wife duo are campaigning the car to help keep alive the memory of its previous owner, Rickey Grundhoefer, who passed away in 2015. The ’69 Nova, which has only 7,500 original miles, is still streetworthy and features the original interior. John employs a 540ci big-block rated at 875 hp and a Powerglide transmission to run the Nova in the 9.7-second zone at 138+ mph when unchained for bracket racing. John’s main focus, however, is within the NHRA Lucas Oil Divisional Super Street 10.90 class, but has also campaigned it in Super Gas 9.90 competition. The meticulously maintained Garage B Racing race car is the end result of big-time, behind-the-scenes support from associates that include Helmin’s own landscaping company, Brickshop Dyno, Ronnie’s Garage, POJO’s Auto Body, Mike’s Engine Repair, Authority Service, Common Wealth Real Estate, Office Furniture Solutions, and Trager General Contracting. John’s crew chief is his daughter Danielle Heileson; his crew also includes son Jeremy and daughter Amber Hutton.

A Wily Veteran Racer
At an impressive 80 years young, Oceanside, California’s Don Ruble Sr., continues to follow his passion. Don (affectionately nicknamed Rebel) is reportedly the second oldest active and licensed NHRA drag racer, behind only the legendary Chris “The Greek” Karamesines. He began dabbling in the sport of drag racing at a very young age and impressively made it to the final round of the 1966 U.S. Nationals in Modified Eliminator with a Chevy Bel Air. Don now races a nicely prepped 1967 Chevy Nova. Despite his Nova tipping the scales at 2,840 pounds, he has chosen to mix it up with all the dragsters in NHRA’s tough Super Comp 8.90 index class. That is his primary focus because his car is capable of 8.7-second e.t.’s when raced “unchecked.” After acquiring the Nova back in 2012, he undertook a major rebuild from front to back and top to bottom. The engine program consists of a 540ci mill that relies on a Powerglide transmission and 5.57:1 rearend gears to get the power to the pavement. Don continues to do all of his own maintenance but is thankful for the ongoing support he receives from Monty Woodard at Machine Tech (Oceanside, California).

Down Under Dedication
Colin Boyd’s 1966 Chevelle is another perfect example of how popular it is in Australia to drag race vintage Chevrolet muscle cars. Based out of Kurrajong Hills, New South Wales, Colin imported his race car (an original, factory SS car still with VIN tag) from the USA after buying it as a roller from Jeremy Melton and Steve Milam (Amarillo, Texas). After the acquisition, Colin evolved the Chevelle into a full chassis racer and debuted it in 2014 at his home track: Sydney Dragway. The engine program was imported, too—built by California-based Mike Lewis Racing Engines. The bullet is a short-deck 582ci big-block Chevy that made over 1,000 hp during dyno testing, but has since had nitrous added for an additional 200 hp to play with. The team runs the car within Australia’s equivalent to Top Sportsman class racing. The 3,140-pound machine has a best e.t. of 8.16 at 165 mph. Colin’s family oriented team includes his son John Boyd (crew chief) and his dad, Brian, as well as close mate Craig Armstong. Colin’s effort is mainly self-funded by his company, Arundel Park Auto Electrics, but also receives support from Flat Out Services and Craig’s Automatics, and dedicates its racing ventures to fallen crew member Ted Clarke, who passed in early 2017.

Showstopping Super Gasser
Carl and Toni Root are NHRA Sportsman racers that certainly get the attention they deserve. For the past five seasons or so, the husband and wife team—who call Washington, Illinois, home—have been fan favorites while campaigning a truly impressive, jewel-quality 1963 Chevy Nova in Super Gas. This car is the end result of a conversion that was originally purchased by Carl back when he was 16 years old. Featuring a remarkable paint scheme (of Carl’s own expertise), this Nova features a Suncoast-produced body and a Tommy Harter chassis. Using a 588ci big-block assembled by Rick Bowman and a Coan transmission and converter, this race car is known for running as good as it looks. That includes numerous Top 10 finishes in NHRA Lucas Oil Divisional points, an event win at the Route 66 Nationals in Joliet, and two career NHRA Jegs Allstars event appearances. The car was wired by Mitch Truman and relies on a Racepak computer for the all-important engine vitals.