Under the Influence: Good Friends are Great Help 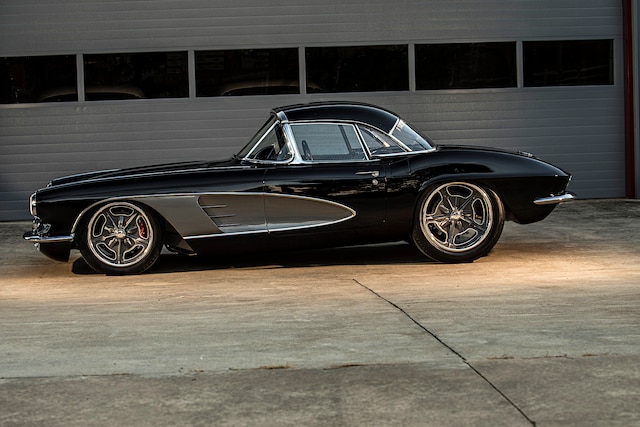 The holy grail for any old car aficionado, whether they be a Studebaker fan or into fancy Cadillacs, is to find an unmolested, low-mileage cherry that still has its dealer installed clear plastic seat covers, etc. One might say these grails can be found from the proverbial old ladies from Pasadena that only drive to church on Sundays. But sometimes finding an old car with low miles might have a dark secret, especially when it’s a high-performance vehicle.

Take, for example, Jack Sheppard and the black 1961 Corvette featured here. Sheppard’s ’61 showed 37,000 original miles on the clock, and everything about it indicated those were truly low miles, but one has to remember most old Corvettes were driven hard and put away cracked.

Sheppard has always liked hot rods and classic cars but it wasn’t until a decade or so after he started his business, Overhead Door Company of Augusta, Georgia, that he was able to fully pursue his passion. And then the floodgates opened with Sheppard building one iconic car a year, showing it and then selling it to move on to the next project. Sheppard likes Corvettes. This ’61 was preceded by a ’62 and he’d like to build another Corvette as soon as this one changes hands.

The styling influences of Sheppard’s longtime friend Bobby Alloway of Alloway’s Hot Rod Shop are clearly evident in the profile of this ’61. The car’s distinctive stance is thanks to Alloway placing the chassis order directly to Art Morrison Enterprises (AME). After which Sheppard deals directly with AME on the chassis order. There were 10,939 Corvettes produced in 1961 and this particular Corvette came equipped with a base 230hp 283 and base three-speed manual transmission. The exterior color was one of 3,178 painted Ermine White, 954 with Roman Red coves and 3,487 with a black-vinyl interior.

The front framerails of an Alloway spec’d AME Corvette chassis are pinched to ensure a tighter turning radius with a radically slammed stance. The steering is a Detroit Speed Inc., tuned rack-and-pinion in control of pointing a pair of Wilwood 12.88-inch rotors clamped by six-piston calipers tucked inside 18x7 Billet Specialties Bonneville wheels shod with 245/45R18 Goodyear Eagle tires. Damping the nose is handled with JRi Shocks coilovers.

The live axle rear suspension is based around a Currie 9-inch housing with a Truetrac limited-slip differential with JRi Shocks coilovers. Strange Engineering axles are hanging a pair of 20x11 Billet Specialties Bonneville wheels shod with 265/50R20 Goodyear Eagle tires. The brake master cylinder is an unassisted Wilwood, and the emergency brake is engaged with an E-Stopp pushbutton controller.

Exhaust exits through a pair of ceramic-coated Sanderson long-tube headers. Sheppard is thoroughly hands-on when it comes to building his cars, including bending the exhaust system and installing it. Sheppard twisted up 2 1/2-inch pipes welded to a pair of Borla stainless steel mufflers to complete the exhaust system. Fed by a Rock Valley gas tank and a Corvette tradition since 1957, fuel injection is in the form of an MSD Atomic EFI system with a Billet Specialties air cleaner. Ignition comes from an MSD Pro-Billet distributor and MSD Blaster coil with Taylor plug wires. The cooling system is comprised of a Stewart water pump, SPAL 16-inch electric fan and DeWitts radiator.

The TREMEC TKO five-speed transmission came from American Powertrain of Cookeville, Tennessee. A good way to illustrate the amount of intricate details Sheppard incorporated into his ’61 Corvette that aren’t visible unless one really starts examining the car closely is the fully smoothed Dart engine block and fully polished aluminum bellhousing done by Dan’s Polishing Shop of Adamsville, Tennessee. In addition, Dan’s did all of the chrome plating. J&M Stainless restored and polished all of the ’61’s stainless trim.

Climate control is complements of a Vintage Air Front Runner serpentine system with a 170-amp Proline alternator driving Vintage Air air-conditioning. In front of the driver rests a Billet Specialties steering wheel on an ididit steering column with bespoke gauges by Classic Instruments sporting a Jack Sheppard logo. To clean up the firewall, a triad of Lokar pedals works in unison with Kugel Komponents reverse underdash brake and clutch master cylinders. The sound system is by Alpine, complete with a rearview camera. A result of not wanting a Technicolor display of colored wiring under the dash, the only store bought part is a Ron Francis fuse panel. Sheppard and Steve Wiley wired the ’61 completely from scratch using black wire only.

For the interior, Steve Holcomb’s Pro Auto Custom Interiors of Knoxville, Tennessee, stitched charcoal-colored leather upholstery and custom-made the center console. Dynamat was used throughout, including the trunk. As a part of undertaking heavy fiberglass work, tubs and a new trunk floor, Sheppard deleted the spare tire well and then Holcomb trimmed the trunk to match the interior appointments.

Sheppard’s backyard home shop is a gearhead’s dream in anyone’s book. The building stands 100x75 feet and has every kind of automotive tool imaginable, including a Pullmax and a paint booth. These days, Sheppard works at his Overhead Door business until late noon and then heads home to work on his latest build. Toward early evening, Jack’s friend Charles Goen shows up and lends a hand. Stripping the ’61 down to bare fiberglass revealed the 37,000 original mile car had been hit hard and repaired poorly. Bad enough that the two had to cut the nose off from the firewall forward and graft on a new front clip from Corvette Image. Once all of the major glasswork was done it was time to bury the body in Clausen spray polyester primer/surfacer and block it out for Sheppard to spray it in Chrysler DX8 Black ChromaBase and then entomb it under seven coats of ChromaBase clear. The coves are done in DuPont Chroma Premier Charcoal. Currently Jack is working on a 1954 Chevy Bel Air two-door hardtop and is open to offers on his ’61 Corvette … because that’s how Jack’s build-one-car-a-year plan works. Vette