Simple, praiseworthy Kansas Nova celebrates the past with a modest proposal for tomorrow 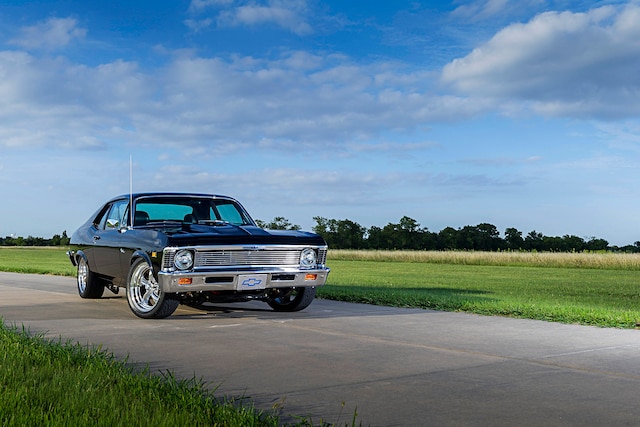 Don’t know about you but it seems that the majority of vehicles in enthusiast magazines these days are stretching for the top rung. It’s all or nothing, and it seems that there’s not much in between. Larry Taylor doesn’t let that kind of stuff lead him around. He’s an old hand with Novas, and since his first 1966, he’s herded at least five of ’em, including a rare but clunky 1974 Spirit of America. How’d he get the hook? When he was a 15-year-old he helped his father rebuild a ’54 post car—which he ultimately traded for ’55 hardtop.

For the black beauty idling on these pages, Larry charged Tom at Wilhite Auto Service in Derby, Kansas, with the confirmation. The Nova was listed on autotrader.com in Bonner Springs, west of Kansas City. Larry just had to look. Arrgh! It seized him. By the throat. “The car was beautiful in PPG Black,” he said. “It had the right stance and was the best Nova for that body style I had seen in some time. But there were some issues that needed fixing.” It cried for a new fuel system, had no brakes to speak of, and it refused to idle. Yeah, and it was compounded by a leaky peg-leg rearend and a weeping transmission. Larry crinkled his eyes and cracked philosophically, “The car just needed some tender loving care and a good home.”

Wilhite addressed the gig list: He augmented stopping power with a vacuum pump and new brake pads. He added an electric fuel pump and a Holley dual-feed inlet kit. He set up a battery cable junction box and the appropriate relay switches. He replaced the pinion seal and amended the 10-bolt housing with an Eaton Truetrac differential.

Once the car was safe to pedal around, Wilhite opened the box and shook the crap out of it. They hoisted the body away and got down with the chassis. They cleaned, repainted, and bestowed the ’rails with new hardware. Since access was easy, they put up the refurbished suspension bits, added racier brakes and tried on modest 17-inch rollers.

The goal for this road dog was reliability. Larry didn’t envision an embarrassing amount of grunt either, just a competent, inexpensive cast-iron V-8 offering excellent driveability. A Chevrolet Performance 350 HO Base long-block replaced the original wheezer, but being a hot rodder, Larry sure as hell couldn’t leave it alone. He went with the historical hop-up imperatives. He superseded the usual flat tappet stick with a Chevrolet Performance hydraulic roller camshaft that exhibits more duration and lift. He had Wilhite build the induction system with an Edelbrock Air-Gap manifold and a sensibly sized Quick Fuel HR-650 carburetor.

Exhaust systems are always intriguing. Hot rods need headers and this one sports Doug’s pipes. The primary tubes are small, enhancing low-end punch, and channel into a 2.5-inch system. Since the long-block package does not include a spark generator, Wilhite hopped on MSD stuff: a Pro-Billet distributor (PN 8360), Blaster 3 coil, and Street Fire primary wires.

For the drivetrain, Larry and Tom arrived at a sensible compromise among comfort, reliability, and performance. Because he goes hard at it on the road, Larry wanted to drive a modern automatic with an overdriven top gear (2.61:1 final drive). In an effort to address the connection among vehicle mass, gearing, and camshaft events, Wilhite fitted a 700-R4 with a B&M 2,000-stall converter. Rather than an aftermarket ratchet, Wilhite modified a 2004 Pontiac Grand Prix shifter to work in its stead.

In the bat cave, everything looks ordinary until you absorb the details. Those 2004 Grand Prix buckets (the Barcaloungers wouldn’t fit) and that distinctive shifter/console look like they grew there. The underlayment is Classic Industries loop carpet. The door panels are original.

Unlike the United States Treasury, Larry can’t just print all the money he’d like. That the Nova was finished solid when he bought it saved him lots of loot. He doesn’t know who did the bodywork or the pristine paint, but the guy’s rendition is exemplary. A pastiche of bold black and bits of bright trim make the Nova pop. Torq-Thrust II nostalgia punctuates the period and evokes Larry’s formative years, but that’s basically a thing just between him and the car.

The Nova has already generated delight in a younger generation, which when you come down to it, is the reason for all of this monkey business in the first place. The ultimate experience for Larry didn’t concern him. “It was letting my grandson drive the car to [a] show and have him winning First Place in the Street Machine category. He was excited to say the least.”

Larry’s Nova is a success. It represents Everyman’s muscle car. It isn’t a bank-breaker, a lateral-G executioner, or any kind of snowflake, either. It’s not a hand-carved one-off that only a few could fund; it’s a modest, truthful, and affordable representation of the real world.