Cruising in Her 1959 Chevy Corvette 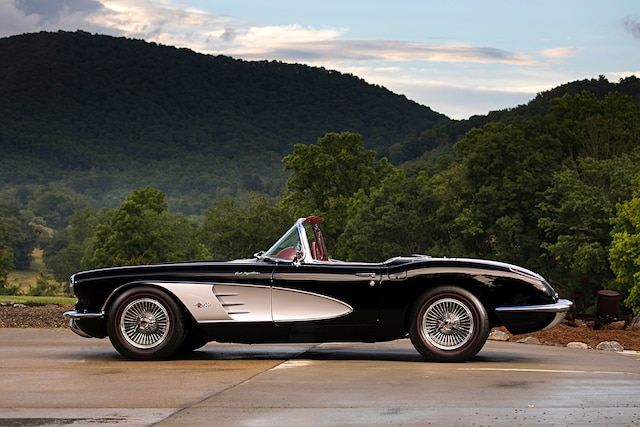 She wanted a Corvette, but not just any Corvette, a C1 Corvette. But not just any year C1 Corvette, a 1959 Corvette. Not that it was necessarily the best or the rarest of the C1s, but that it was produced the same year she was “produced.” It’s funny how we tend to gravitate to seemingly small numerical connections such as this, but it happens and it happens quite often. It’s certainly not a bad thing, either. If anything, someone that goes out of their way to find a certain model year that has significance to them means that they’re going to cherish that car even longer and keep its history alive. And she—Debbie Daniels of Candler, North Carolina—really went out of her way to make the ’59 thing happen.

Going back to 2010, Debbie had wanted a classic Corvette for a while so she and her husband, Jerry, decided to start putting their feelers out for a 1959 Vette. They asked friends to keep their eyes peeled for a ’59 that was in need of a little TLC. Then it became a waiting game because nothing was coming up. Plenty of ’58s and ’60s popped up, but it was two years before their friend John Beaver in Pickerington, Ohio, found an elusive ’59 that fit the bill. It was the right model year and it had been sitting in storage for 30 years, but it had been in the same family for 41 years and you know how that one goes. The owner obviously wasn’t too keen on selling, but after extensive conversations he decided to let it go.

“We made the trip to Pickerington to bring it home,” Debbie told us. When she and her husband got there they found it to be “a real barn find, dead mice and all.” The owner, Eric, had purchased the car from his mother when his father passed away. The car had sat in a barn for 15 years then in Eric’s shop for another 15 until he handed it over to Debbie and Jerry. “It was a hard choice for the owner,” Debbie recalls. “Forty-one years in the same family.”

Eric gave the Daniels copies of all the paperwork documenting the car’s history and showed them pictures of the trophies his father, Dallas, had won racing the Corvette at Powell Motor Speedway in Columbus, Ohio, back in the day. He also made sure to give them his business card so they could stay in touch. Then off they went.

“We originally wanted to stay as close to original as possible since the car was complete, but a few comfort features snuck in,” Debbie told us. They started with the powertrain by rebuilding the 283, using many of the original parts, such as the crank and rods. It received an 0.030 overbore, then Jerry put the engine back together with a Speed Pro hydraulic flat tappet camshaft and Melling high-volume oil pump. The stock heads went back on, along with a ’66 Corvette L97 intake manifold. Spark was handled by a Corvette tach drive distributor updated with a PerTronix Ignitor module and a PerTronix Fame-Thrower coil while fuel and air delivery would be handled by a FAST EZ-EFI system. An OEM off-road replacement polished stainless exhaust would give Debbie the sound she wanted.

The crown jewel of the small-block, though, was the Inglese Sidedraft Induction. “While the Inglese Sidedraft was my pick—it looked like car jewelry to me—it was not an easy fit for Jerry,” Debbie recalled. The hood ended up not clearing, so Jerry modified the motor mounts to drop the engine 5/8-inch but that still wasn’t enough. The solution came in the form of four new custom CNC-machined stacks with a new angle that would clear the hood like they needed. Debbie expressed a huge thanks to friends Dennis Edwards and Jimmy Clontz of Diversified Machining Concepts in their hometown of Candler, North Carolina, for all their help making that happen. Then Jerry gave the new stacks a good file and polish to get that jewelry look Debbie loved. All that was left was to get ’er tuned by Chuck Gleaves of Gleaves Custom Induction.

The changing of gears would be handled by an original but rebuilt 1959 BorgWarner T-10 four-speed. They decided to go with a shorter First gear to work with the higher-geared rearend, going from a 2.20:1 to a 2.54:1. Speaking of that rearend, it had a highly aggressive 4.56:1 rear gear with a posi, but since the Daniels weren’t going racing and simply wanted a good driver, they threw in a 3.08 and an open differential.

As for the Vette’s suspension setup, they wanted to keep it simple and mostly stock with OEM parts other than a 1 1/2-inch drop up front and a 1-inch drop in the rear paired with Monroe gas shocks all the way around. Debbie also wanted to keep the brakes simple and stock, but that didn’t last and Jerry ended up swapping out the front drums for discs later in the build. He used 11-inch rotors with single-piston calipers and a Wilwood adjustable proportioning valve.

The Corvette was painted a shade of green somewhere down the line, but Debbie and Jerry decided Tuxedo Black with Inca Silver coves was a must. To get it ready for a new coat of paint, they had the body sandblasted. Then it was sent over to Buckner Auto Restoration in Weaverville, North Carolina, for the final bodywork and sprayed it with Southern Polyurethanes paint. With the ’59 back from paint and body, it was time for all the finishing touches to go on. Debbie and Jerry purchased rechromed, all-original trim pieces and installed them on the Corvette. To complete the look of the car, they picked up a set of 1965 knock-off replica wheels from Corvette America and wrapped them in BFGoodrich Redline tires, 205/75R15s all around.

The final piece of the puzzle for the Daniels’ mostly stock restoration of their C1 was the interior. They sourced all new upholstery and seat covers as a kit from Al Knoch Interiors in the form of red vinyl and red carpet. The OEM gauges were refurbished at Corvette Clocks by Roger in Jackson, Tennessee, then installed by Jerry, along with the other interior pieces.

With the plan being to take the car on lots of trips and to plenty of shows, there were a couple more deviations from stock Debbie wanted to incorporate. For one, the car was originally a hardtop only, so they went out and purchased a whole soft top and frame from Coffman Corvette. This would make the transition from exposed to covered much easier in case they ran into any inclement weather. They also installed Rostra cruise control for those long trips.

The whole build process took about four years, and somewhere along the line they did a little more research and found out the car was built in January 1959—not only the same year but even the same month as Debbie was born! Remember how we mentioned that we all are easy drawn to coincidences like that? Well, Debbie sure was too, which made the whole process that much more fulfilling. And now that two-plus years of searching and four years of restoring were over, she could finally enjoy her 1959 Corvette. Vette