1958 Corvette Moves From Shed To Shed Before Seeing Daylight 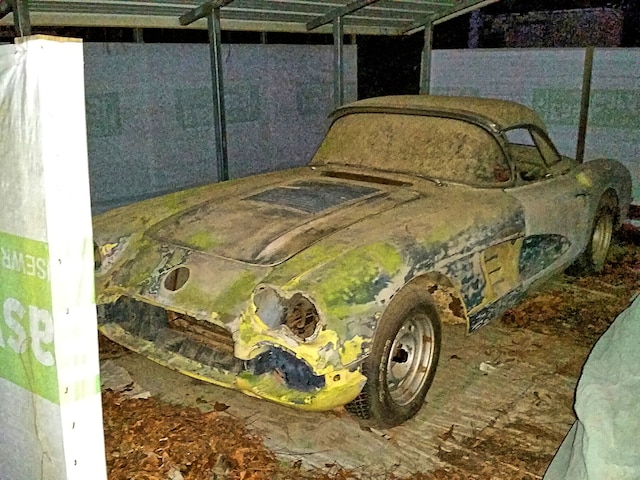 The friend that I had with me said, “Oh, that thing looks horrible.” I said, “What are you talking about? That’s the most beautiful thing I’ve ever seen.”

Beauty is in the eye of the beholder. Todd Gerald admits his dream 1958 Corvette did look a little scary with the interior completely removed, one door off, and over half of an ugly yellow repaint sanded away.

Todd got a call out of the blue regarding a Vette he had known about since 1985. Todd’s friend, who was one year older than him, bought the running 1958 Corvette after he graduated from high school.

“Somebody had done a previous restoration and painted everything—bumpers, front end, interior, the whole works—yellow, which was disgusting. He started taking the car apart, took off all the chrome and pulled the interior out. He did not take the engine and trans out, and then he went into the military,” Todd said. “He never touched the Corvette again.”

In 2009, due to a financial pinch, Todd got the chance to buy the ’58. “The wife was the one that did the dealings,” Todd recalls. “They knew that I would definitely jump, and, of course, I did.”

Todd arrived with his friend Harmon and a trailer to get the ’58, with its “pretty spectacular” hardtop attached. The car rolled out of the shed to the edge of the property.

“I laid all the parts out around the car to see what was missing because all the parts were still in the shed, just in piles. I put the seats in the car and laid the bumpers and trim pieces around the car. For some reason he had removed the instrument cluster, which was a mess because they are full of light bulbs and wires sticking out that go in the back.”

Todd laughed as he remembered feeling like a kid at Christmas as he picked up the ’58. He pictured his 1958 Corvette being on the road in six months as “some type of weekend driver.”

Back home at his lean to shed—where in high school in the early 1980s he dropped a V-8 in a Ford Pinto—Todd did a major cleanup, followed by rough sanding to remove the primer and god-awful yellow paint.

This work went on for a few months. Once in a while Todd’s dad would sand on the body some, but the two never did anything major.

“The next thing I knew, a year had passed, and then two. I kept telling myself I need to do something. I don’t need it just sitting there talking to the birds and bees,” said Todd.

What happened to the dream of putting this barn find on the road in six months? Todd said the 1958 Vette, disassembled, had become to him “like a 1,000-piece jigsaw puzzle,” as he tried to figure out where to even start.

“I’d taken engines out of cars and rebuilt them and put them back in, but I’d never actually gone to the extent of taking body parts off and wiring.”

Todd cites the lack of tools and a real shop as more obstacles for a home hobby restoration. Today, he takes comfort knowing the car is not going down in value and he can possibly sell the 1958 Vette one day. Vette

“From 2009 until a couple of years ago I would tinker with it a little bit, but the last couple of years I haven’t done anything.” Todd moved the car from the shed in the country to this metal carport trimmed with house wrap.

The pile of Corvette parts became like a 1,000-piece jigsaw puzzle, especially for an amateur restorer that did not disassemble the car.

The former owner did not remove the two-speed Powerglide or the engine, which Todd said you could turn over by hand.

The interior got the yellow paint treatment many years ago.

Todd says there is no body damage but he wonders why in the world the last owner took the grille apart.

Traces of the original Silver Blue paint are still visible. Todd said, “I’m 51 now. I just built a house about a year and a half ago, moved from the country to the city, and so I know I’m probably never going to do anything with the Corvette, and selling it is always in the back of my mind.”