The Illustrated Corvette Designer Series No. 249: This is arguably the greatest “could have been” Corvette concept 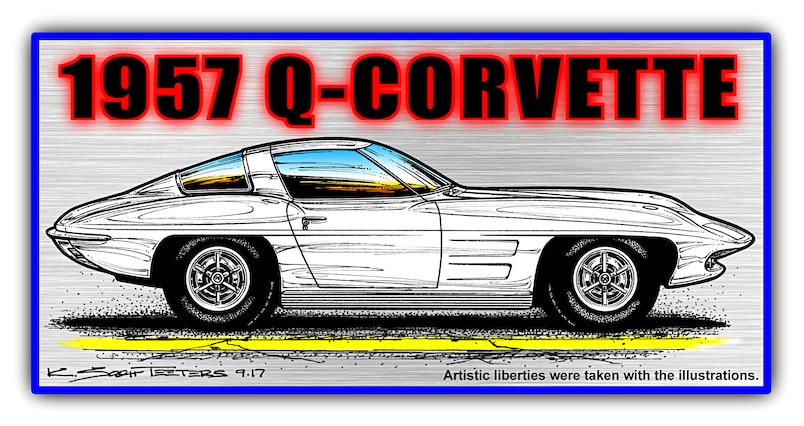 Chevrolet has been frustrating Corvette fans for decades because when new generation Corvettes come out, they tend to be “evolutionary” and not “revolutionary.” The most revolutionary new generation Corvette was the C5 with its all-new body, interior, all-aluminum LS1 engine, transaxle, svelte suspension and hydroformed frame. Next on the list of revolutionary Corvettes is the 1963-’67 Sting Ray, with its out-of-this-world new body, new perimeter frame, four-wheel independent suspension, and later disc brakes. But the second-generation Sting Ray could have been so much more.

Ed Cole was a true automotive visionary with a passion for over-the-horizon technology. While general manager of Chevrolet in the mid-1950s, Cole was hot on the idea of combining the transmission and rear axle of all Chevrolet cars into a “transaxle.” This would eliminate the large transmission hump that was common in cars of the day. Also, moving the transmission to the rear of the car would improve traction and thus, be a safer car. Cole called his grand vision the “Q-Chevrolet” line, and he wanted it by 1960. This plan included the Corvette and would have been the most radical Corvette this side of the upcoming mid-engine C8 Corvette.

Typically, new car designs start out as wild-looking art renderings. But the Q-Corvette was different because it wasn’t just a new suit of clothes for an existing structure. Zora Arkus-Duntov worked out the entire basic layout first. Then a full-size wooden and fiberglass buck was created that closely approximated where the engine, drivetrain, suspension, and interior would be located. Everything was there except for the body.

First, let’s look at Duntov’s vision for the project that could have been the second-generation Corvette. It was just a “wish list” but it shows how advanced Duntov’s thinking was in 1957. Initially, Duntov proposed the use of a steel platform, similar to the design used on Porsches. The front suspension was to be independent and the rear suspension system based on the new transaxle with a modified swing-axle design, using universal joint halfshafts as stress members. The transaxle was to be available as a manual or automatic. The clutch or torque converter would be mounted behind the engine, working off a small-diameter flywheel. The clutch system was to be a double-disc clutch design. Finned drum brakes would be used on all four wheels with the rear drums inboard mounted to reduce unsprung weight.

The new small-block Chevy engine was just two years old, but Duntov wanted an all-aluminum version with the new Rochester fuel-injection system. The proposed aluminum heads would have no steel valveguides or pressed-in valve seats. By the early 1960s, this all proved to not be possible using existing block and head casting molds. To keep the engine mounted as low as possible, a racing-style dry-sump oil system was proposed. Later, Duntov expressed that the dry-sump system wasn’t necessary and that the transaxle wouldn’t do that much for weight distribution.

Here’s a shocker for you! Duntov determined that a steel body could be made using inexpensive Kirksite dies made of zinc and six-percent aluminum—excellent for low-volume production. The steel body would have added overall stiffness to the completed car. Duntov also noted that poor customer satisfaction with the Corvette’s fiberglass body had more to do with the finish of the body and not with the material. A steel body would have had a better and more consistent finish.

All configurations were considered during the design phase of the Q-Corvette: coupe, convertible and Targa top. One design element for the coupe version that made it into all future Corvettes was the built-in rollbar as part of the structure. As practical as that was, one design aspect that looked great on paper but didn’t stand a snowball’s chance was the total absence of an A-pillar. And lastly, since everything was being explored, designers worked out several ways of making the doors open out and then up, sort of in a prehistoric “Lambo doors” kind of way.

As the Q-Corvette made its way through the design process, Duntov’s feelings on the structure changed. Early on he proposed a steel platform but later felt that a separate steel frame, instead of a unit-body design, would better allow future body changes. This is exactly what happened when it was decided in 1965 that the Mako Shark-II design would be the next Corvette. C3 Corvettes all ride on the same basic frame and suspension as the 1963 Sting Ray.

The Corvette was born a beauty queen, so looks were important. Bill Mitchell was just about to take over Harley Earl’s position as VP of Design and had definite ideas of his own. Mitchell sketched out on the back of an envelope what he wanted and then handed his sketch off to engineer/designer Bob McLean to manage the Q-Corvette’s styling. To understand the roots of Mitchell’s concept, look up the Abarth-Fiat 750 and Abarth-Alfa 1000—that’s where the Corvette’s fender humps came from. While neither car looks like a Sting Ray, you can clearly see the influence.

Mitchell had one other design theme he wanted that eventually defined “the Corvette look.” Mitchell invited his designer/stylist team to his house to show them a stuffed and mounted Mako Shark fish that he had recently caught while deep-sea fishing off the coast of Florida. Mitchell instructed his designers, “That’s the feeling I want! The powerful, yet graceful feeling of a shark, in an automobile.”

McLean put Robert Veryzer in charge of stylists Peter Brock, Chuck Pohlmann and Norm Neumann. The stylists’ drawing boards were placed around the fullsize, engineering space buck and Veryzer instructed the stylists, “Be Brave!” Brock later commented that it was one of the rare projects which saw the first lines fall into place as the most logical and appealing. Many sketches were created with Brock’s winning out as the design to use for the first quarter-scale clay model. As the design process moved along, headlight placement was a serious challenge with designers moving in the direction of flip-up headlights and driving lights mounted low and outboard of the grille opening. The hood featured a vent slot close to the front of the hood to vent hot air from the radiator. After more grooming, a full-size clay model was built.

By October 1957, the fullsize clay Q-Corvette was shown to management and compared to a 1958 Corvette. The Q-Corvette looked like the 21st century. The theory was that by making the car more compact, the exterior could be small, yet the interior larger. Here’s how the fullsize clay Q-Corvette measured compared to a 1958 Corvette; Wheelbase: 94 inches (8 inches shorter), Track: 53 inches (4 inches narrower in the front and 5.8 inches in the back), Height: 46 inches (6 inches lower), and Projected Weight: 2,225 pounds (711 pounds less). Duntov’s position was that the next Corvette, based on the Q-Corvette, would offer improved interior space, plus the improved suspension and weight distribution would provide a better ride, handling and overall improved performance.

So, what happened? Often, proposed new Corvettes have bad timing. As the 1950s were drawing to a close, the boom times and glow of the decade was fading and a recession was ahead. Creating an entire line of Q-Chevrolet cars could not be supported in a contracting economy. The only way the Q-Corvette program could work was if the entire line of Chevrolet cars were onboard with similar components that could be amortized. As Duntov liked to say, “The program came to a screeching halt!” He then proposed using the transaxle and suspension parts for a mid-engine Corvette, which was what he really wanted to do.

In retrospect, the projected goals for an all-new 1960 Corvette based on the Q-Corvette was wildly optimistic. But, there was the bottom line. An all-new Q-Corvette-based car without amortization would be extremely expensive. But all was not lost. The basic body shape, with modifications, became Bill Mitchell’s 1959 Stingray Racer, which with modifications and fastback roof became the 1963 Sting Ray; a car that many consider an instant American classic. The larger design parameters of the Q-Corvette would not make it into production until the arrival of the C5 in 1997 and the dry-sump oil system didn’t arrive until 2006 with the C6 Z06. If the economy hadn’t tanked in 1958 and the Q-Chevrolet line of cars made it into production, the C2 Sting Ray might have arrived in 1960 and would have laid claim as The Revolutionary Corvette.