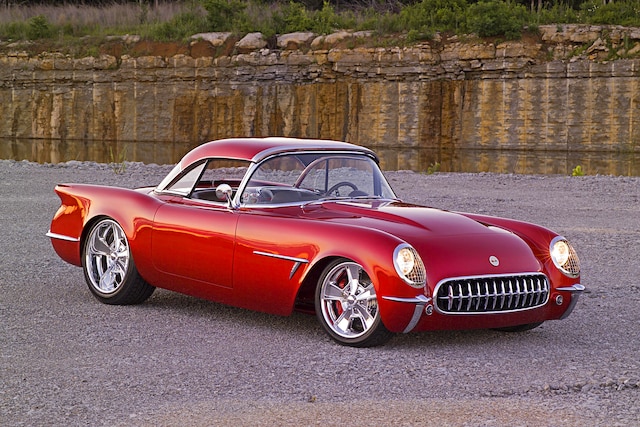 When you own a hot rod shop you get to see a lot of projects go from start to finish with numerous goals and aspirations used to get them there. Some people want their car restored, some want it hot rodded and some want a little of both. As owner of Larry Griffey’s Hot Rods and Restorations in Knoxville, Tennessee, Larry Griffey has had the privilege of working on a large variety of classics and hot rods over the years. He’s helped many automotive enthusiasts turn their dream ride from just that—a dream—into reality. But, in the 38 years he’s been in the business not once has he built a car from the ground up for himself. What he had done in 38 years is gained an appreciation for a lot of different types of cars and build styles. So when he finally decided to build a weekend cruiser for him and his wife, Robbie, those influences got in the way of the modest project he originally intended.

Griffey had worked on plenty of different makes and models of cars over the years but when it came time to build one for himself, the choice was pretty clear: a Corvette. Even more specifically, “My wife has always wanted a C1 Corvette,” Griffey told us. So they jumped on it when the opportunity arose to buy a 1954 Corvette body at a reasonable price.

“I began this project in my home shop as a weekend project,” recalls Griffey, with the original plan being to turn the Corvette into a nice driver. But, as he told us, that’s not exactly how things worked out. “As projects go, it developed into a much larger and more detailed project as we decided to make some very radical changes to the car.” He wanted to fit larger wheels and tires under the car so a little cutting and modifying was needed here and there. Then he got the idea of incorporating a detail from one of his favorite prototype Corvettes: the 1954 Corvette Convertible Coupe displayed by Chevrolet at the 1954 GM Motorama.

That year, Chevy unveiled three prototype Corvettes dubbed the “Dream Cars,” which included the Nomad, Corvair and Convertible Coupe. Of the three, the Convertible Coupe is what really caught on. Why? Well, one of the biggest gripes with the 1953-’55 Corvettes was their lack of a roof or side glass, an issue remedied by the bolt-on hardtop of the Convertible Coupe. Since Griffey’s ’54 Vette project was already getting out of hand he decided to incorporate a liftoff hardtop like the prototype. Luckily, he had already enlisted the help of his friend Chuck Powell, so the two got to work re-contouring the cowl to accept a 1956 Corvette windshield and auxiliary hardtop. Griffey wasn’t going to just stop at the hardtop though, he also wanted the rollup windows the prototype had—a feature first available with ’56 Corvettes. They split and widened the doors, then grafted on 1956 inner-door structures and door posts to support power windows.

Other body modifications might not immediately stand out as dramatically as the liftoff top but they are dramatic nonetheless. Griffey channeled the Corvette by cutting the floor out of the body and removing 1-inch of height from the rear, tapering to 2 1/4-inches removed from the front. He also split the body down the middle and added 3-inches of width to the Vette’s rear, narrowing down the length of the Vette to 1 3/4 additional inches at the nose. Add in widening the rear wheelwells, enlarging the exhaust ports and fabricating a custom cowl hood and you can only imagine the number of hours Griffey and Powell spent working with the fiberglass body. Griffey told us he used 30 yards of fiberglass mat and 38 gallons of resin over the course of the build. With all the bodywork completed, the car was sprayed in Soul Red paint from Matrix. All the trim, grille and bumpers chromed by Advanced Plating were then custom-fit to the body.

Underneath all that custom fiberglass, Griffey wanted to bring the Corvette’s handling characteristics forward a few decades so he started with a tubular chassis from Jamison’s Custom Corvette as the foundation. Out back, he used the independent rear suspension from a C4 Corvette with a limited-slip differential and 3.36:1 gears. He narrowed the rearend 3 inches overall and then used RideTech coilovers instead of the transverse leaf spring. A Speedway Engineering antisway bar was installed to keep the car’s composure through the corners. Up front it’s a similar story with most of the suspension components coming from a C4 Corvette, including the upper and lower control arms and spindles. The rack-and-pinion was also sourced from a C4 and was connected to an ididit steering column. RideTech coilovers were again used up front and paired with a custom antisway bar while Baer disc brakes were fitted all around with 14-inch cross-drilled and vented rotors. Griffey didn’t want the underside of the Vette to go unnoticed, so many of the suspension components were chrome-plated, such as the halfshafts, control arms and the coil springs.

While all that chrome underneath Griffey’s Vette might be harder to spot with the car on the ground, you can’t miss the Billet Specialties Knuckle wheels he chose. The modifications to the rear wheelwells and narrowing of the rearend allowed Griffey to fit 20x10s in the rear while a smaller set of 18x8s live up front. A staggered set of BFGoodrich G-Force Comp 2 tires were chosen for the Billet Specialties wheels and measure 255/45ZR20 and 225/40ZR18, respectively.

The powerplant Larry chose was an LS1 topped with an Edelbrock E-Force Supercharger along with an upgraded camshaft and valvesprings from Brian Tooley Racing. The LS1 is kept cool with a custom-built aluminum radiator. Griffey wanted to really dress up the engine bay of his C1 so he had Kevin Riffey of Larry Griffey’s Hot Rods and Restorations fab up a custom supercharger surround that hides all the plumbing and wiring. The exhaust system is comprised of Sanderson headers that dump into custom 3-inch stainless pipes routed around the tube chassis. MagnaFlow mufflers quiet it down just a tad before exiting through the rear bumper. Atkins & Son Transmission in Knoxville, Tennessee, built a 4L60E to handle the supercharged power.

Steve Holcomb of Pro Auto Custom Interiors in Knoxville, Tennessee, wrapped the interior in deep earth-colored leather with a hatched accent material covering the floors as well as the seat and door panel inserts. The leather-wrapped Con2r steering wheel along with custom gauges from Classic Instruments and Lokar shifter add to the clean look of the Vette’s cabin. A Vintage Air unit powered by a Sanden compressor keeps Larry and Robbie cool underneath the custom auxiliary hardtop.

The whole project took Griffey and Powell 25-30 weekends each year for five and a half years. Just three months before the 2017 Detroit Autorama, Griffey realized he just might finish in time to bring the car for its big reveal. But, his experience building hot rods over the years told him there was no way he and Powell could make that deadline alone so he brought the car into work and put all of his guys on it.

Before he knew it, the ’54 was done and on its way to the 2017 Detroit Autorama where it was chosen as one of the Great Eight—one of his most memorable experiences with the car to date, according to Griffey. He named the car Transitions as a nod to all the influences and changes the Corvette underwent during the build. It’s the masterful combination of all those transitions that turned this 1954 Corvette into a C1 you just can’t ignore. Vette

A Corvette barn find is an increasingly rare event these days when just one car is unearthed. Here are two from the same barn!