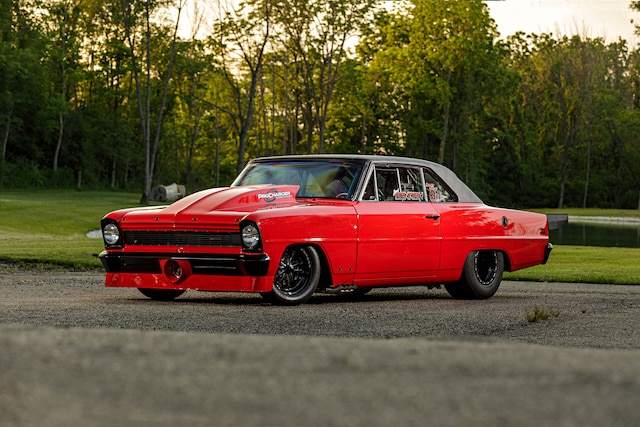 Despite what you might surmise, this is a genuine success story. Despite a long, arduous journey finishing the car, it wouldn’t be a real project unless adversity prevailed, at least for a while. Dedication is what saved the day, and relatively speaking, the results were spectacular.

Jarod Wenrick’s storyline is familiar. His dad was a hot rodder who loved street rods and Jarod helped him build them. That routine was anything but routine. He learned. He saw his dream unfold before him like a map. Unlike so many other kids, he was able to interact with a caring father on a level field, working right alongside him and being consulted, offering his opinion without fear of being rebuffed. Jarod picked a 1951 Ford, personalized it, and finally took it to the dragstrip. What a great way to live.

Now, the tape jumps way into the future. The circle came complete. It was Jarod’s turn to show his son Jaran what he had learned and what it meant to him. “I bought the car in 2013 in Colorado as a roller,” said Jarod. “It was a nitrous racer with a leaf-spring rear. My son and I converted it for X275 and powered it with a turbocharged small-block. We spent over a year fabricating and doing the work ourselves.”

Then adversity rose up and bellowed. On its initial pass at Kil-Kare Raceway (Xenia, Ohio), the Nova left the line but lost traction almost immediately and went head-on into the concrete. While Jaran’s dad walked away unblemished, a big part of him, that part you can’t see, was ruptured.

Jarod: “I decided to leave the car in the trailer and take some time to see what the next step was. After going back and forth about rebuilding or parting the car out, I woke up one morning to a post-it note on the kitchen counter my 14-year-old daughter had left. The note read ‘Never give up!’ With these words and the image of the accident left in my son, the decision was made. I was introduced to Tim Lyons [Lyons Custom Motorsports (LCM), Rossville, Georgia].

“The quality of the work and attention to detail is so important and this is why Tim was referred to me. After a few phone discussions and working out the details, we delivered the damaged car to his shop. I was more than impressed with the immaculate, well-organized work environment. I knew the Nova was in good hands. As work progressed, I decided to switch back to the power-adder that won me a world championship in 2007.”

As for that unorthodox small-block, Jarod decided to put it all down at BES Racing Engines in Guilford, Indiana. He decided on some esoteric parts and the forward thinking that created them. While the top-notch bottom end components are fairly standard forgings, the top end of the small-block certainly is not. The cylinders of the 430ci engine are capped by M&M Competition Racing Revolution billet construction that feature equally spaced exhaust ports and intake ports capable of passing 460 cfm.

LCM made exclusive contributions throughout. For the foundation, they built a chassis from chrome-moly. They hoisted the fabbed 9-inch housing, endowed it with a Strange Engineering floater axle conversion, and supported it with a Ness/LCM four-link rear suspension. LCM fabricated the steering column that connects to the LCM rack steering system. They built the exhaust headers slick and dragster-like.

Then they got to work on the body-part esoterica. The steel shell supports a Glasstek/LCM fiberglass clip and carbon-fiber doors and decklid. They custom-built the grille and integrated it with the lower valance and supercharger intake (front-mounted via Chris Alston geardrive system). That concentrated PPG red was originally formulated for a Viper. Jarod opined: “Our company colors are red and black. A friend suggested a black vinyl top for the contrast. At first I thought ‘you’re crazy’ as did Tim when I told him. But the idea of something different started to warm up on me. Now, I can’t imagine the car without it.”

“The car was finished late-season 2014. We began testing at Norwalk and attended the NMCA race there. Within the first four passes we had the car running competitive numbers in Street Outlaw. We took it all the way to runner-up in its debut. In 2015, we started the season with an NMCA win at Bradenton. Then we won at Atlanta and again at Bowling Green. We finished the season with a runner-up in the championship chase. This speaks for the quality of the build. Our best numbers to date (August 2017) in the eighth are 4.36 at 167.5.”