When numbers-matching isn’t an option, restomod 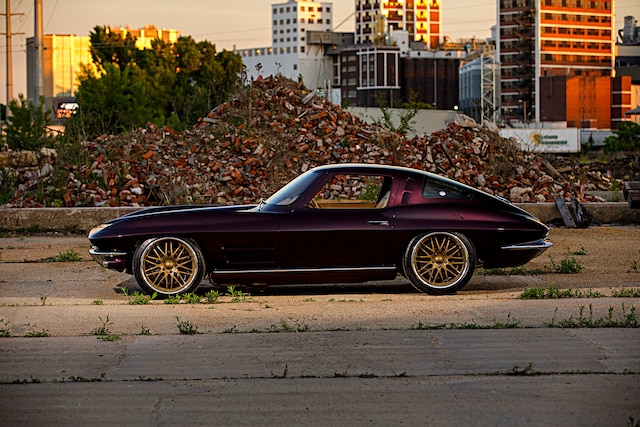 The 1963 model year saw the very first complete remodel of America’s most iconic sports car: the Corvette. The C2, as us Corvette enthusiasts like to refer to it, was a complete overhaul and a huge step forward in just about every way for this Chevrolet model, but there was one aspect of the new Vette that wasn’t met with open arms: the rear window. It sounds crazy now, but back in the ’60s and ’70s, these things routinely got hacked up with drivetrain swaps and the removal of that “eyesore” of a split-window in favor of glass from a later year C2. Eventually, enough time passed and the midyear Vettes as a whole became highly desirable again and even more to the point, people started to figure out that fewer and fewer 1963 coupes were left intact.

How does the ’63 you see here fit in? Glad you asked. In this Corvette’s not-to-distant past, it was being sold with the claim that it was a real-deal, numbers-matching car, making it highly desirable if the claim were true. Of course, someone jumped on the Corvette and bought it. But, after examining the car they found it was nowhere near a numbers-matching Vette and decided their best course of action was to cut their losses, re-sell the Vette as a “project car” and find something else. The next—and current—owner, Robert Chiusano of Springville, Iowa, was more than happy to take home the car because his plans for it were anything but making it a numbers-matching restoration.

When he found this car for sale, his intent from the beginning was to do a full-on restomod. Given the history of the vehicle and its lack of numbers-matching parts it was the perfect candidate. But to Chiusano, this was much more than just another project car. “To own a 1963 Corvette split-window coupe was a teenage dream, never believing I could or would ever own one. This is about turning dreams into reality,” Chiusano told us. After many years, the finances finally lined up and he was able to start turning that dream into a reality.

They wanted a strong foundation to begin with so they called up Art Morrison Enterprises (AME) and ordered a full custom chassis for the C2. The chassis came complete with independent front and rear suspension that utilizes JRi coilovers all around. They also ordered the AME chassis with Wilwood 14 1/2-inch carbon ceramic rotors and six-piston calipers. To fit over the sizable brakes, they got hold of an equally sizable set of Hot Rods by Boyd wheels and then shod them in Michelin Pilot Super Sport tires. Up front, the 19x10 rollers are wrapped in 255/35R19 rubber while the 19x12 rears have 325/30R19s.

While they waited for the custom chassis to be built, the guys at Eddie’s Rod & Custom started the extensive bodywork. Chiusano wanted to integrate various subtle details that would add to the overall curb appeal of the car without being immediately noticeable. The list of modifications is long but oh-so-good, starting with custom floorpans, wheelhousings, firewall and access panel in the engine bay. They also fabricated custom front and rear valances as well as heavily modifying the bumpers and bringing them in toward the body by more than an inch. They utilized a few different laser-cut pieces throughout the car such as the “cookie sheet” vents on the ’63 hood, the doorsill plates and the rocker spears. The removal of the windwings and door locks along with a custom floating grille add to the subtle touches that give Chiusano’s Corvette a more modern appearance. Finally, the front and rear windows got a makeover by having their trim removed and the glass flush-mounted. The color Chiusano chose is called Biondi Santi and was painted using Glasurit’s Line 90 paint.

The rest of the Vette is pretty spectacular, but it’s what’s under the hood that just might steal the show. The first thing you notice are the chrome-tipped and horizontally oriented individual throttle bodies. They are custom units from Fox Injection and they feed air to a small-block built by Motorheads Manufacturing in Ely, Iowa. The engine started life in 1965 as a 327, but has now been upgraded significantly with forged pistons and Pro Topline aluminum cylinder heads, giving the engine 10:1 compression. To make use of that extra airflow through the heads, they tossed in a beefy Comp Cams camshaft. An MSD HEI distributor provides the spark for the small-block while Hedman 2 1/2-inch long-tube headers and a 2 1/2-inch custom stainless steel exhaust system built by Eddie’s Rod & Custom evacuate the burned gasses. All these parts working together help the old girl produce right around 500 naturally aspirated horsepower.

Behind the 327 is bolted a six-speed TREMEC T-56 Magnum so Chiusano can enjoy rowing through the gears. Power is transferred aft to a Dana 60 centersection—part of AME’s independent rear suspension—complete with a limited-slip differential and a 3.73:1 rear gear.

When we asked Chiusano what he thought the most unique feature of the car was, he told us it’s the Infinity Box that controls most of the car’s electric functions. The Infinity Box is essentially a substitute for the traditional wiring harness of a car—everything wired runs into this little box. More than just making wiring a little easier, this also allowed Eddie’s Rod & Custom to make everything controllable from an iPad that mounts in the dash, including the headlights, central locking, GPS navigation, sound system, climate control, ignition and interior lighting. In fact, this unit even has its own Wi-Fi signal so you can control everything from your mobile device.

Eddie’s Rod & Custom worked with Gabe’s Street Rod Custom Interiors in San Bernardino, California, to put the rest of the interior together and seamlessly integrate it with this new tech. Eddie’s Rod & Custom first widened the waterfall in the center console 1 1/2 inches to accept the iPad and painted it to match the exterior. Then they installed a Kicker sound system complete with front and rear Kicker Q-Class speakers and subwoofer. They also mounted the Classic Instruments All-American nickel gauges in a custom-airbrushed woodgrain dash sprayed by Scott Takes of Underground Art Studio in Cedar Rapids, Iowa. Gabe’s handled all the upholstery, including the custom front seats and rear package area that they wrapped in tan leather. The leather continued on the door panels, atop the dash and down onto the center console.

After the final touches were put on the ’63, some of the Eddie’s Rod & Customs crew, along with Chiusano, loaded the car up and took it to the 2017 Detroit Autorama for its debut. To this day, Chiusano’s most memorable experience with the Corvette was “rolling the car off its trailer and unveiling it to the public eye for the first time. The reaction by the public was nothing short of spectacular.” So it may not be the numbers-matching car that collectors dream about, but it certainly is the fulfilment of Chiusano’s dream, and for him that’s all that really matters. Vette