This car was built to be driven 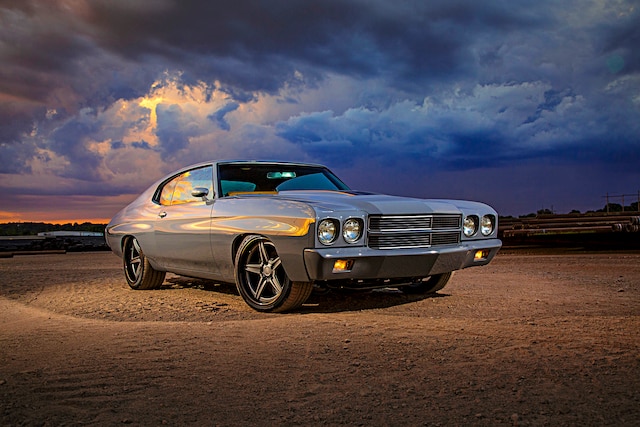 Some might claim humbler aspirations but deep down all us car guys would give anything to own a classic muscle car built to the nines. Whether that is a nut-and-bolt, concours-quality restoration; an all-out Pro Street drag car; or a Pro Touring restomod, there’s that one dream build we wish we could turn into a reality. Ryan Kochen is right there with us—or at least he was.

“I’ve always dreamed of having a high-end custom restomod of my own to drive whenever I want,” Ryan told us. So, over the years he worked his way up the ladder until one day there was just enough money in his pocketbook to act on that longing. His muscle car of choice was a Chevelle; a 1970 Chevelle to be exact. Ryan found his Chevelle in Kennesaw, Georgia, just a couple hours’ drive east of his home in Hoover, Alabama. At the time of purchase, the car was little more than a frame and a few body panels, which he sent over to a local garage that specializes in paint and body work. Their work was decent, but too slow for Ryan who just couldn’t wait to get behind the wheel of his dream Chevelle. After a year and a half he found a new shop: Goolsby Customs.

He heard about Goolsby from a friend who raved about their work, and since their shop was close by in Hueytown, Alabama, it just made sense. Getting the Chevelle completed took Goolsby another year and quite a few more Ben Franklins than Ryan expected, but the result was worth it. “While I ended up well over my budget, that decision was the best one I could have ever made,” Ryan raved. Knowing that the guys at Goolsby are really good at what they do, Ryan did his best to let their creativity fly and not get in the way too much. What they collectively came up with is a Chevelle that truly stands out.

“We wanted to create a high-performance American muscle car with the rich look of a high-end European exotic,” Ryan told us. With that in mind, Goolsby started out by shaving the driprails and marker lights along with smoothing the front bumper and tucking the rear bumper. Then the car was coated in a highly unique color: Glasurit Nardo Gray. Tight-fitting Goolsby-edition Lokar door handles finish off the sophisticated exterior.

Inside the Chevelle it gets even more sophisticated. M&M Hot Rod Interiors of Holly Pond, Alabama, were handed the task of giving the car some more European flair by mimicking a Ferrari interior. They started with front seats out of a Hyundai Tiburon, removed the headrests, and wrapped them in custom, perforated tan leather. The rear seats and door panels were covered in the same custom leather to match, as was the Billet Specialties steering wheel, center console, and dash. Continuing the modern look, the stock gauges were swapped out for Classic Instruments AutoCross units. A Bowler shift knob and three pedals with Lokar pedal pads give you an idea of what might be hiding in the trans tunnel under the center console.

Powering the Chevelle is a Pace Performance LS3 crate engine making 485 horsepower at the flywheel. A Vintage Air LS Front Runner accessory drive, finished in black, and C&R Racing aluminum radiator keep the engine running as it should and looking good. The LS3 exhales through a custom 3-inch stainless exhaust fabbed up by the guys at Goolsby and dumps out of Borla ProXS mufflers.

We mentioned three pedals and a Bowler shift knob earlier, and that’s because behind the LS Ryan wanted a transmission he could row through the gears himself. To get the job done, Goolsby bolted up a TREMEC T-56 Magnum six-speed built by Bowler Performance Transmissions. Inland Empire Driveline supplied the custom driveshaft that sends power from the six-speed back to a Currie Enterprises Ford 9-inch with a limited-slip and 3.73 gears.

Continuing on with the car’s underpinnings, Goolsby built some serious handling capabilities into the Chevelle. Speedtech spindles and tubular control arms went up front while adjustable RideTech HQ coilovers were installed at all four corners. Braking is taken care of by drilled and slotted Wilwood disc brakes, front and rear. Knowing you can’t make a car handle well without a good set of wheels and tires, Goolsby fitted a staggered set of B-Forged 500 TS wheels wrapped in Pirelli P Zero rubber. Up front are 18×9 wheels with 255/35R18 tires while out back are 20x10s and 295/40R20s.

After almost three years, plus a lifetime of waiting, Ryan finally had the custom restomod of his dreams. He wasn’t about to let it sit; he was ready to drive. With such tried-and-true drivetrain and suspension components in combination with its stunning looks inside and out, we think he probably got exactly what he wanted. But rather than make any assumptions, we’ll let Ryan tell you what he thinks: “This car was built to be driven and while it came out better than I could have expected, Goolsby Customs delivered just that—an absolute gorgeous car that drives like a dream.”