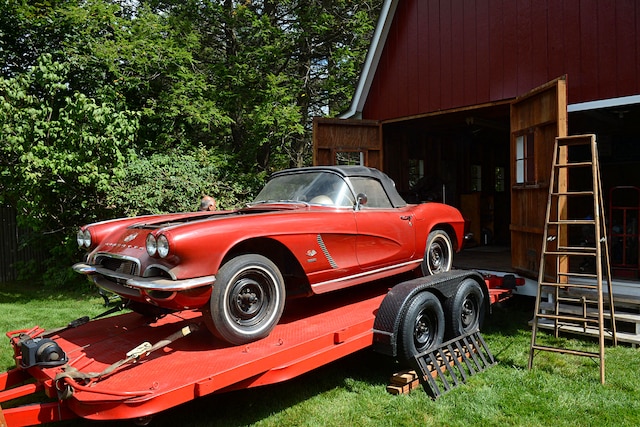 The 1962 fuelie and all the car parts and the neon Chevrolet sign are gone now. Dot admits she never realized that “many, many people knew there was a Corvette in a barn” in this small New England town but nobody knew where it was.

Readers contact me about barn finds, but most tips come after a car’s purchase and extraction. This one was a “before” tip, the best kind.

An email from a reader included the phone number for his friend Steve O’Neill, who had located a 1962 Corvette “in a barn.”

I called O’Neill on Tuesday, September 5, 2017. He hoped to pick up the Vette either that Thursday or Saturday, if the weather held.

My interest grew when I found out the 1962 was a factory fuelie with a four-speed and still wearing its original Honduras Maroon paint with Fawn interior. Except for an engine rebuild, the car was “untouched” and had been “sleeping for 50 years.”

I told O’Neill more about my Rare Finds column that has been running for 27 years and how I would like to come out and take pictures when he picked up the car. When he said, “yeah” in a very reserved tone I got the feeling he had some reservations, which is very understandable.

“I was trying to keep it on the hush-hush because I didn’t want anyone to get in the middle and start to slow up the deal. You know how that goes sometimes. They start to swarm,” O’Neill said.

I convinced O’Neill I was not part of this swarm. I merely wanted to do a story. O’Neill graciously agreed to ask the widow selling the Vette if it would be okay for me to come out. The Corvette was parked in a barn behind her house.

The email came the next day: “Seller is ok for Sat.” I could go along. How different would this be, to be there for the barn find retrieval?

I met O’Neill at 8:30 a.m. in a parking lot of a pizza place five minutes from the seller’s on Saturday, September 9. His first comment was, “I hope this is of interest to you. The car is so clean, it looks staged.”

I followed O’Neill’s white GMC pickup pulling a bright red open trailer to the location. He knocked at the door of a white frame house. A lady answered and welcomed us into her kitchen with a window view of a tall red barn. She had known O’Neill since he was a kid when he went to school with her son Mark. Now in her 70s, Dot, as she is known, does not look near her age, about 5-foot 4-inch and petite. She did not want to be in any of the photos. She did, however, let me record her story and photograph the find.

She said the Corvette was her husband’s “passion.” He bought the car in 1963.

When they got married in April 1965 the Corvette was their only car. So that’s what they drove on their honeymoon to Virginia Beach, “with stops all along the way.”

“We got into Washington [D.C.] at 11:00 o’clock at night, and the next thing I know he [Skip] says, ‘help me take the hardtop off,’” which they carried upstairs to their hotel room. At midnight, they rode around Washington with the top down. Dot had married a car person.

Because the Corvette was their only car, Skip drove Dot to and from work. But on Saturdays she would “get the car and go to the laundromat because we didn’t have a washer and dryer. I’d also go grocery shopping.”

Skip would buy a “winter unit” (such as an old station wagon) until the Corvette went back on the road in the spring. He drove the 1962 Corvette until 1967, a year after their first child, Mark, was born.

Dot said, “I don’t know why. Why do car people do anything? I have no idea. I’m not a car person.”

Skip fit the perfectionist car-person mold. He was always going to rebuild the 1962.

“When my son was a year and a half old we moved. We put it in the garage at another house, and then we came here. He built a barn, and that’s where it sat because he got into T-buckets.”

When Skip realized that he was very sick he “went down into the cellar and rebuilt the engine.” When he passed away, which was 13 years ago, Dot received many inquiries to purchase the 1962 Corvette. She turned them all down, but finally the time had come to sell.

“I’m ready,” Dot said. Then she repeated the same line, “I’m ready,” all the while not appearing sad, smiling with keys in hand as she, Steve, and I marched on that warm late summer Saturday afternoon to alter the course of 50 years. Out of that kitchen we walked and onto the lush green grass traversing about 30 yards to that red barn, its roof rising 25 feet against that blue sky spotted with fluffy white clouds, not so much unlike the majestic steeple of an old New England church.

Dot unlocked the door and I followed Steve inside. The front stored odds and ends, including a backyard barbeque, while above an attic stored more “stuff,” including old pipes and mufflers that Steve retrieved for the 1962.

My eyes were immediately drawn to the rear of the barn where white sheets covered what was obviously a car parked parallel to the width of the barn. This Corvette was much more than stored. Skip had put his beloved 1962 on display, complete with a vintage lighted Chevrolet sign on the barn wall, while a second sign hung from the celling that read “Corvette Parking Only.”

O’Neill believes storage in the barn, with no direct sunlight on the body, plus a wooden floor, elevated and with air flowing underneath to carry away moisture, helped preserve the Corvette so well. “There’s no condensation, no mice problems, not even a cobweb on the car,” O’Neill observed. “When I took the cover off, it looked like it’s been sitting there for 4-5 years. That’s how well-preserved it is.”

Skip took the car off the road in 1967 and pulled the engine for a rebuild that he did not get around to until after he got sick. He did not have time to put the 327 back in his 1962 Vette. Dot said, “The day he died we sat down and I wrote down all the information that he needed, you know, for the car, cause I gave it all to Steve.”

Of course, Skip would never have sold the Corvette. Dot had even laughed at that idea.

“Oh, gosh no, gosh no, no, no, he would have driven it. We always kidded him. We said when the time comes—this was when we were very young—we’d say we’re not going to have a casket. We’re going to put you in the car with a smile on your face and your sunglasses.”

Paul, who worked with Skip for many years, told us that he and other friends “protected” Dot from people that were looking for the 1962, a legend in the area, by keeping the Corvette’s location a secret.