Family Matters: In an age of over-the-top budget-breaking projects this father and son project is something we can all aspire to 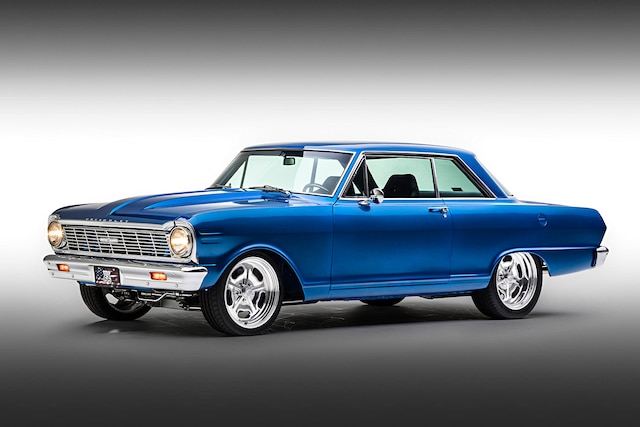 Some ideas start out simple but end up taking on a life of their own and morphing into something far larger than what was initially envisioned. A perfect example of this is Ray and Jordan Hoogsteen’s 1965 Chevy Nova. The original plan was for a simple father and son project that the pair could take to the track and race together, but as we said, simple can get complicated pretty fast.

Ray picked up the Nova for $2,300 and gave it to Jordan as a high school graduation present. As he told it, “It was primer gray with Centerline Convo wheels. The car had no interior except for two broken-down bucket seats and the suspension was bone stock. It ran and had what we thought was a pretty fast 355 small-block backed up by a TH350 trans. To Jordan it was the coolest thing ever. Almost immediately we took it to the dragstrip to make some runs. Jordan made a pass, and as he applied the brakes (original drums), the car tried to make a hard left into the wall, scaring us both nearly to death. Jordan hit the brakes again and the Nova tried to hit the right wall. Needless to say, our racing was done for that day. We called a friend of ours, Sal Solorzano, for some help. We’ve been friends since high school and he works over at Total Cost Involved Engineering (TCI), so we figured he could help sort out our unsafe brakes.” The duo took the Nova over to Sal’s house and before long the drivetrain was out and they were bolting in a full TCI suspension package. Of course, all those shiny new parts made the rest of the worn-down Nova look even worse. And that’s when the snowball effect kicked in.

To get a quick, inexpensive paintjob on the car, Ray took it over to another longtime friend, Dan Veltkamp, owner of Auto-B-Craft in Long Beach, California. “I told Dan what I had in mind and he told us to bring it in and said, ‘I’ll take care of it’,” recalled Ray. Dan had his crew fill all the holes from the missing molding and add new front fenders, along with a new 2.5-inch cowl hood. From there, the body was massaged and shot in a stunning blue paint that Jordan had picked out. As Ray tells it, “When Dan told us to come pick up the Nova we were amazed at how beautiful the car turned out, and how far and above what we talked about or envisioned Dan had gone in painting the car! We knew at that point we were going all-in on this project. The Nova sat for nearly a year while we saved up the money to finish it and while Jordan completed training at the Fire Academy.” When the father and son team were ready to get on the project again, they hauled the blue Nova back over to Sal’s house where they all took turns re-assembling the Nova.

The 355 small-block was ditched in favor of a crate 383 stroker from BluePrint Engines, topped with an Edelbrock intake and a Holley 750 double-pumper carb fed by a Holley electric fuel pump. An MSD ignition system provides spark while coated TCI headers ditch the spent gases. Keeping the potent V-8 running cool is left to the aluminum radiator from U.S. Radiator and a Weiand water pump. This combo is good for 440 hp and 483 lb-ft of twist. Backing up the new engine is a 700-R4 overdrive four-speed from Toy Shop Transmissions (Pomona, California) with a TCS 3,000-stall converter spinning back to a Currie 9-inch with 4.11 gears and a Detroit Truetrac posi.

Of course, it was the suspension that got this whole ball rolling. Up front, a TCI IFS clip with a 2-inch drop and adjustable TCI shocks were paired up with a Wilwood disc brake kit. Out back there’s a TCI four-link setup with another pair of adjustable TCI shocks and more Wilwood binders. This combination makes the Nova a lot of fun in the corners while still maintaining a nice ride around town. For rolling stock, they chose Circle Racing Series 88 18x7 front (4.75-inch backspacing) and 18x9 rear (4.00-inch backspacing) polished wheels shod in 225/40R18 front and 255/45R18 rear Toyo tires.

With the rest of the car coming together so nicely, they wanted the interior to be just as clean, so the Nova was taken over to Elegance Auto Interior in Upland, California, where Mark Lopez installed new door panels and glass from Classic Industries along with black leather Cerullo XR Sport front buckets. AutoMeter Ultra-Lite gauges track the vitals while a Continental steering wheel from Classic Performance Products keeps the Nova pointed in the right direction. Ray and Jordan couldn’t be any more pleased with how the Chevy turned out. In Ray’s words, “The car turned out incredible, far nicer and way more fun to drive than we ever imagined!”