The pieces of this unfinished Vette restoration are scattered, but they all reside under the roof of a ramshackle pole barn…somewhere 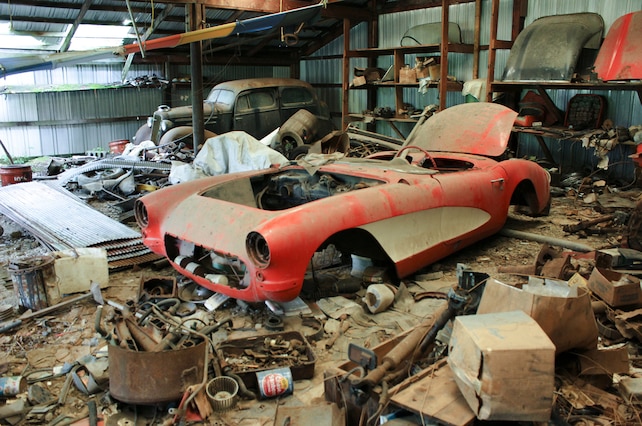 "She opened up the barns doors and it was laying there," Matt Barczak said. He shouldn't have been surprised. After all, he had heard about this 1957 Corvette for almost his entire life. "I was waiting to see a 1975 Corvette. I was skeptical about the whole story."

The old Vette looked ridiculous in Matt's mind. That was his impression of the scene, set inside a pole barn on a farm outside the small town of Glen Campbell, Pennsylvania.

"She gave me directions and I was able to find the farm. I had to follow her and her son through the brush to get to the barn where the car was. You had to walk down a hill to find the roof of this barn."

So, this was the 1957 his dad told him about so many years ago. "My dad is 67 and part of that age group of guys that knew in the mid-1970s that a 1957 Corvette was out here in a barn. The back half of the barn collapsed, and they pulled the car to the front of the barn. They tore down the old barn and put up this half-steel, half-wood building, and it is starting to go."

The Corvette Is Found!

In the foreground is the 2x4 intake with carburetors and air cleaners attached. The body is off the frame, which is somewhere in the building.

The legend came alive in the spring of 2017. Barczak felt numb to have a chance just to see the car, and then that ridiculous feeling came over him. "It was all scattered, the motor on an engine stand, the frame with five original wheels, the three-speed transmission laying on the ground, parts spread out everywhere, some of them on the shelf, some tossed into the car, some on the ground."

The son of the Vette's owner, Bernadine, was the reason the car wasn't for sale. "I questioned her son. I said are you the son that is interested in doing this Corvette some day? He was roughly my age, mid-30s. He said yeah. He and his buddies were going to work on it." As the conversation proceeded, the son admitted he hadn't worked on the Vette in many years and had no idea how to restore a car and would not know where to begin. "I said are you interested in selling? I would make a cash offer."

Barczak was content he had found a complete 1957 Corvette, scattered as it was, inside this 40x70-foot pole barn. The frame had surface rust but was very solid and had never been wrecked. The body probably hid a few secrets, but if it had ever been hit it hadn't been hit very hard. The 283 on the stand was probably originally a dual four tune, maybe with the high-lift cam and 270 horsepower. The transmission was a three-speed manual, which most 1957 Corvettes came with. The four-speed didn't arrive, Matt knew, until very late in the 1957 model year. Now the young car enthusiast was about to make an offer.

"They are very good people and a very good family. I didn't want to try to take advantage of them," Matt said. He made them what he considered a very fair offer and after some deliberation they accepted. Bernadine's husband, Daniel, had recently passed away. He was the one that would never sell.

A week later, Matt showed up with a trailer to pick up the car. He talked to Daniel's brother, Gerald. "He started telling me how Daniel bought the Vette in 1959 when he was working in Ohio. He moved back to Pennsylvania in 1966 and the last inspection sticker on the windshield is dated 1975. He said the car was painted black but was red originally. They tore the car apart and repainted the body, but never finished it."

The unfinished restoration turned this car into a time capsule, apart for 42 years, but complete. Matt Barczak is committed to pick up and finish that restoration begun seven years before he was born.