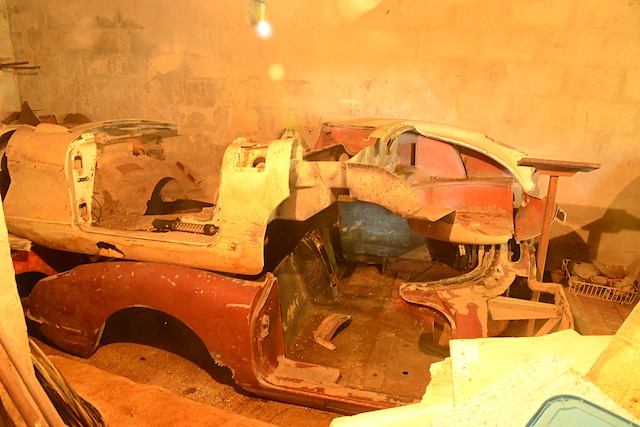 What started out as a pair of 1956 Corvette bodies buried in the basement of a wood shop since the late 1960s was shaping up to be one ’56 and one ’59, plus a surprise, according to Bernie. “I accumulated a whole lot of pieces down there,” Bernie said.

Bernie, who is 85, requested his last name and address be left out for privacy reasons, has been building cars, as an enthusiast (not a dealer), since he was a teenager back in the mid-1940s.

I was along for the “unearthing,” to take photos and gather information. Also along for the unearthing was Bernie’s friend Jonathan Large, 48-years old who lives a few miles down the road in rural Virginia, with the Blue Ridge Mountain Parkway visible from his front yard and the Ararat River across the road, where the water flows so clear it’s like you’re drinking direct from the mountains.

The two have become car buddies over the last 20 years, but even Jonathan didn’t know about the Corvettes in the basement of Bernie’s wood shop, where they’ve been stored for almost 50 years.

Before opening the door to the basement of the woodshed, wedged in the side of a hill, Bernie laughed and made his signature statement, “I ain’t got no junk.” Once inside the basement, people might wonder why Bernie said, “This is junk. Let’s not forget that.”

Jonathan had already explained to us back at his home hobby garage, “I can call my own car junk or a rust bucket.” But, calling another man’s car junk is “kind of like kicking their dog. You don’t do that, or you’ll get off on the wrong foot real quick.”

Bernie was not sure exactly what we would find in the wood shop basement. When we asked, Bernie, ever the kindly Southern gentleman with a flair for humor, said, “Once you see it, you’ll know what it is.”

When we opened the doors to reveal many aluminum screen doors, Bernie’s wit rose again when I asked him, “Why so many screen doors?” to which he answered, “To keep the flies out. You don’t see any flies out here do you?”

As Jonathan, Jack and Buck removed the screen doors and other items, the outline of one Corvette body on top of a second one appeared. Bernie explained that years ago he had made a deal with a neighbor that had three frames who thought they were “good enough to make two frames.” The neighbor had a 1960 Corvette he needed a frame for. Bernie said the frames disappeared when the neighbor “got to doping” and ended up in prison.

After digging out the two Corvette bodies, one a 1956 and the other a 1959, plus many fiberglass pieces, we found out in this first “barn” was just the start. More discoveries were ahead.

In “the big round barn” we found a 1956-’57 Corvette hood and a stack of Corvette parts and trim pieces. Jonathan could take what he needed to complete one Corvette, which would be the 1959. Not a greedy person and respectful of his car friends, Jonathan let his buddy Buck buy a real gem, a 1957 Corvette dual-quad intake manifold and chrome air cleaner housing. The carburetors were nowhere in sight. “I don’t need the dual-four setup,” Jonathan said. He was planning to buy an updated frame and install an LS engine for his ’59 restomod build.

Bernie then led us to a third barn, where he leaned against a pickup truck and peered into the attic with a serious look on his face. “There’s a few Corvette parts up there. If you want to climb up and look I’ll let you. Don’t step on nothing that ain’t tied down. Most of them boards are nailed down, but some of them ain’t.”

Jonathan climbed up the steel ladder into the attic, black as night, followed by the ever-present Buck, both with flashlights. “Here’s a windshield frame,” Jonathan shouted out. “It’s got a windshield in it, too?” Bernie asked. “There’s one from a 1959 or a 1960 up here.”

I climbed up the ladder and poked my head into the darkness and heat of that hot September Virginia day. Jonathan and Buck looked like coal miners carrying flashlights. It was a fascinating call-and-response situation as they yelled out what Corvette parts they found: “two trunk lids,” “part of a door,” “two windshield frames,” “convertible top cover,” “dash trim,” and more. Bernie told them to hand them down out of the attic.

The heat was so stifling Jonathan said he would come back for the decklid and other parts. “Woo. I tell you what, she’s warm up here,” Buck said. “No, it’s hot. It ain’t warm. Look at the sweat rolling off me.”

Jonathan asked about steering columns, which Bernie explained he had given to the same neighbor that got the three frames. But, he did get one of two steering wheels, hung on the wall of the barn.

Jonathan backed his trailer, loaded with the car bodies and assorted fiberglass to the edge of the barn. He, Jack and Buck loaded the trailer with more parts from the third barn. Jonathan would come back and select parts he needed from the large pile in the barn to complete his Corvette.

“We’ll come back and do an inventory of what we need. I don’t want to just take it all because he wants to keep some of them and that’s understandable for his boys’ two Corvettes in case they need a part. We want to preserve it; and like Bernie said, he just wouldn’t give it to anybody, so I consider myself to be the caretaker. I feel blessed today.”

We began in the basement of the wood shop, where we found a 1956 Corvette body stacked on top of a 1959 body.

Bernie parted with his collection of “fiberglass,” to his neighbor and friend of 20 years, Jonathan Large (right).

We picked up the 1956 body and carried out of the basement.

Next, we went inside the big barn and fournd Corvette doors, a radiator, and other parts in a corner.

In another corner of the big barn we found boxes of trim and glass, wiring, a gas tank, rubber moldings, window frames, panels and more.

Buck was excited to find this Corvette steering wheel.

Bernie visits with Jonathan after they pulled many Corvette parts (including these decklids) down from the attic of a second barn.

The back of the pickup bed filled with assorted Corvette fiberglass pieces.

The back of the pickup bed filled with assorted Corvette fiberglass pieces.

From left to right, Todd, Jack, Buck, and Jonathan prepare to lift a 1959 Corvette body, stored almost 50 years in the basement of a wood shop, onto an open trailer.