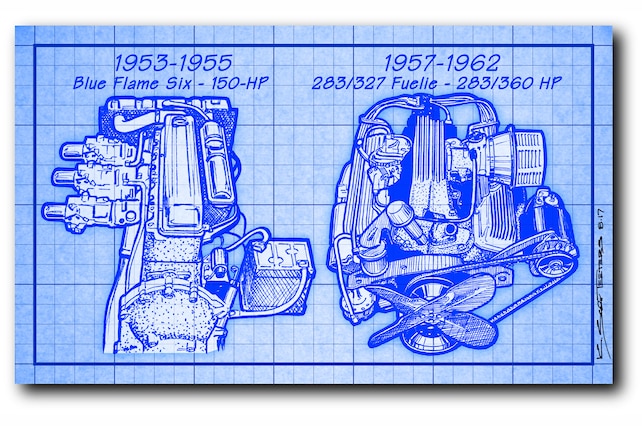 With few exceptions, all Corvettes suffer from the same affliction: the success of their successors. Within the Corvette’s long and colorful history, there are many spectacular models that, in their day, were the “to die for” Corvettes, only to be eclipsed by the next “to die for” Corvette. While prices for C1 Corvettes have become steep because of their low production numbers, there isn’t another generation Corvette that was so radically changed from its beginning to end, while remaining astonishingly similar. Of course, when the 1963 Sting Ray arrived with its new and improved structure and independent rear suspension, C1 Corvettes quickly became second-class. But a closer look shows that from 1957 to 1962, C1s were pretty good performance cars.

The C1 generation can be segmented into four distinctive groups: 1953-’55, 1956-’57, 1958-’60 and 1961-’62. Let’s look at the bodies. The first, second and third groups have no common important body panels, while the third and fourth groups share common front ends. Harley Earl’s first Corvette is a timeless classic that needs to be seen next to regular cars of the day. But the rollout of the first three years of Corvettes was not good. Sales were terrible because the car truly wasn’t completed. In the first three years, only 4,640 Corvettes were sold in total. Even though the 1955 Corvette finally had a three-speed manual transmission and the all-new 265 small-block Chevy V-8 engine, the car was already tainted by its past. On top of that, Ford’s new Thunderbird was a much more finished car with luxury features expected in a premium-priced automobile. Ford sold 16,155 of the 1955 Thunderbirds while Chevrolet only sold 700 Corvettes.

As clean and aggressive as the 1956-’57 Corvette body was, all GM cars were mandated to wear the new corporate four-headlight look. The third body group, the 1958-’60 Corvettes were identical, except for the reduction of chrome trim after 1958. While the 1958 Corvette took some heat for its larger size (9.2-inches longer and 1.7-inches wider) and heavy use of chrome trim, sales jumped to 9,168 for 1958, 9,670 for 1959, and 10,261 for 1960, so Chevrolet was happy. The 1958 model was also retiring Harley Earl’s last Corvette, and he really liked lots of chrome. The fourth body group was the 1961-’62 models; the prelude to the upcoming Sting Ray. The front end was identical to the third body group, except for the grille and other minor trim, but the back end had the distinctive boat tail design with two clusters of two taillights, a look that Corvette would maintain until the arrival of the C7. Sales kept climbing with 10,939 Corvette sold 1961 and 14,531 sold for 1962.

The most dramatic improvements for the C1s were all under the skin. The Blue Flame six was just an interim engine while the new small-block Chevy was in development. C1s started out with 150 horsepower from the Blue Flame six and maxed out with 360 horsepower with the 1962 327 fuelie. The 1955 265 V-8 Corvette got a 45-horsepower bump over the Blue Flame six to 195 horsepower. In 1956, Chevrolet started offering performance engine options for Corvettes and continued to do so until 1981. For $172, 1956 Corvette customers could order RPO 469, the 265ci small-block with dual-quad carbs and 225 horsepower. But 1957 was the year to remember with the arrival of the $484 RPO 579, Rochester fuel injected 283. Two versions were offered, one with 250 horsepower and the other with 283 horsepower.

But the hot news for customers that wanted to race their 1957 Corvette was the first of the Zora Arkus-Duntov and Mauri Rose “racer kit” options: the $780 RPO 684, officially listed as Heavy Duty Racing Suspension. This was a suspension and brakes option, not unlike the 1973-’75 Z07 off-road suspension and brake package and then the 1984-’17 Z51 performance handling package. RPO 684 included heavy-duty front and rear springs and shocks, a larger front stabilizer bar, a quick steering adapter, finned brake drums and rear brake scoops. Combined with either the 270hp dual-quad or the 283hp fuel-injected 283 engine, the manual four-speed transmission and Positraction, customers had a solid foundation to build a competitive Corvette race car. While the RPO numbers changed slightly through 1962, the basic racer kit package remained the same, except for more powerful fuel-injected 283 and 327 engines.

A few words about the C1’s structure. The C1 frame and suspension are often erroneously called “parts bin” cars. This is not correct. C1s all ride on the same basic setup that was designed by Maurice Olley, GM’s top suspension man, who was considered the best in the industry in his day. The first C1 was not designed to be a race car and Duntov described the Corvette as a “wiggle wagon” after his first test track experience. All of Duntov and Rose’s suspension development consisted of changes to suspension settings, mounting points, shocks and springs, sway bars and brakes. Aside from bolt-on parts and mounting points, the frame, suspension, and brakes of a 1953-’62 Corvette are nearly identical. Olley’s design, with Duntov and Rose’s help, made racer kit Corvettes a force to be reckoned with from 1957 to 1962. Let’s look at racing results.

In retrospect, racing Corvettes, using Maurice Olley’s frame and suspension, along with the various racer kits engineered by Duntov and Rose, dominated SCCA A/Production and B/Production classes for five years. The C1 Corvette was not a parts bin car.

And lastly, let’s talk about price. From the beginning, Corvettes have always been a premium automobile. The 1953 model had a base price of $3,498. That was pretty steep, considering that a basic 1953 Chevy 150 Special two-door sedan started at $1,613 and a Cadillac Series 62 Hardtop Coupe started at $3,571. You could get a Cadillac with every gee-wiz option available in 1953, while the Corvette had one color (white) and two options; an AM signal-seeking radio and a heater. Imagine that, the heater was optional and the car didn’t even have roll-up windows. A loaded 1953 Corvette could cost $3,734. Harley Earl gave away many of the 300 1953 Corvettes as gifts and for promotional use. The popular 6-foot 4-inch actor John Wayne was gifted a 1953 Corvette. We can imagine how happy the big man was with the little Corvette with snap-up side windows. He must have thought Chevy was nuts. By 1962, Corvette customers had seven colors to choose from and 19 options. The base price of a 1962 Corvette was $4,038. The next expensive 1962 Chevy was the $3,068 Impala, V-8 four-door wagon. A fully loaded 1962 Corvette cost approximately $5,300; again, Cadillac Series 62 priced.

The C1 Corvette came in like a gentile high school prom queen and went out a rip-snortin’ street brawler and racing champion. The difference between the two is night-and-day, but all based on the same platform, with a ton of improvements. Duntov and his team lead the development and refining efforts for street Corvettes and Duntov and Mauri Rose made sure Chevrolet-engineered racing parts were available. In 1959, Chevrolet offered the Sports Car Equipment Guide for Corvettes that explains how to successfully race your 1959 Corvette. You can download the PDF version from GMHeritageCenter.com. While C1 performance Corvettes aren’t “in-your-face” like today’s Z06, but they were definitely a force to be reckoned with. C1 Corvettes tend to get overlooked because their successors were so much better.

K. Scott Teeters has been a contributing artist and writer with Vette magazine since 1976 when the magazine was titled, Vette Quarterly. Scott’s Corvette art can be seen at www.illustratedcorvetteseries.com. His muscle car and nostalgia drag racing art can be found at www.precision-illustration.com.

Illustrations by the Author