From the Archives: Small Wonder 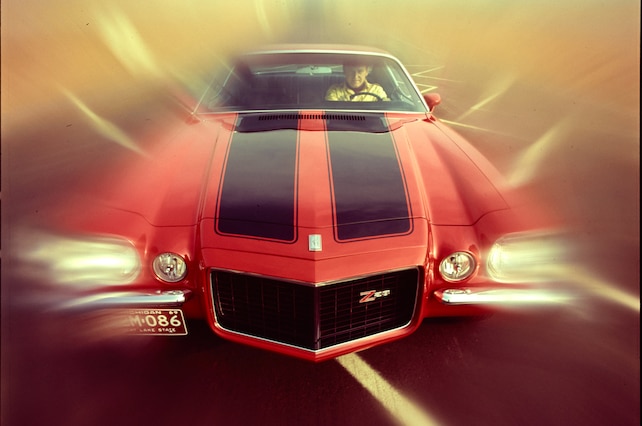 Hot Rod magazine devoted four pages of its March 1970 issue to introducing its readers to the 1970 Camaro. Two of those were a review of the car overall by Feature Editor Steve Kelly, while the second two were an overview of the new LT-1 V-8 written by Associate Editor John Dianna.

Kelly, in fact, sounded downright cranky, probably because the test car he was given “had more than a usual number of high-speed miles” as it “came directly from an automotive writers’ ‘ride-and-drive’ preview (you know, where we all go out and lay waste to everyday traffic-induced inhibitions, and one or two sets of brakes).” As such, the LT-1 in his car was not the “wailer” it should have been.

“A close-ratio four-speed and a good Hurst shifter were manipulated at 6,200 rpm,” Kelly wrote. “We tried power-shifting at 7,000 rpm, and the result was slower times and lower speeds. The engine is good for more than seven grand, but torque drops off over 6,500, diminishing the need for going past that point.” The factory, by the way, rated the LT-1 in the Camaro as producing 360 hp at 6,000 rpm and 380 lb-ft of peak torque at 4,000. (In the Corvette that year the engine was rated at 370 hp and the same amount of torque.)

Kelly wasn’t all that impressed with the car’s chassis, either, pointing out that the new Camaro’s steering geometry “is inherent with understeer characteristics.” He was baffled as to why a rear sway bar, which helped mitigate the push, was an option. “Why all Camaros don’t have such a rear bar is a question not yet suitably answered.”

He noted that the Camaros have softer spring rates “to smoothen the ride,” but that those springs cause “an excessive amount of tail-squatting on acceleration and up-shifting.” His test car “had all the heavy-duty underpinnings, so it would seem that the stiffer-rate spring and shocks needed to aid straight line racing will have to come from outside sources.”

Kelly ended his review with a warning: “Because the car we drove didn’t run as well as it should have, this doesn’t mean similar ones won’t do better. They’d better run better or there’s going to be some big upsets, both on the strip and in the front office.”

Dianna, on the other hand, wrote his piece on the LT-1 after attending the press preview Kelly referred to. “We were afforded an opportunity to wring out the car (no sense calling it driving) around Riverside’s twisting course, and you didn’t have to be a Mark Donohue to turn in a few quick laps—that car really worked.”

Dianna pointed out that the new engine “really isn’t new” and was nearly released for the 1969 model year. New Trans-Am homologation rules for 1970 allowing for destroked blocks opened the door for Chevrolet to drop the 1969 302 in favor of this high-output version of the 350 “that utilizes many of the high performance component designs of yesterday’s 302 engines.”

The forged-steel crank and drop-forged connecting rods “are from the high performance family,” Dianna said, while the forged-aluminum TRW pistons “are basically the same as last year’s 302 units, with the same dome configuration and identical 11.00:1 compression ratio.” The LT-1’s camshaft “lost some of its intake timing, overlap, and total lift,” he noted, “but the new cam design should benefit lower-rpm street performance and off-idle acceleration.”

While the heads retained the 2.02/1.60-inch valves, they now featured screw-in studs and hardened steel pushrod guideplates. “For years racers have been crying for these two simple additions, so Chevy parts-supply depots had better stack ’em high.”

Dianna acknowledged “the times turned with the car Steve Kelly tested fell somewhat short of our honest expectations, but don’t let that bother you,” he added. “This engine is a real sleeper, and is capable of producing ‘cubic’ horsepower. We’ve seen a few ‘homemade’ versions of this new LT-1 package, and the only area in which they needed improvement was in hooking the power to the ground—and that’s just one of the things this ‘better-late-than-never’ Z28 has going for it.”