Low and Mean 1972 Chevrolet Chevelle with Over 640 Horsepower

Not By The Book: One of the smoothest interpretations of modern Pro Street yet 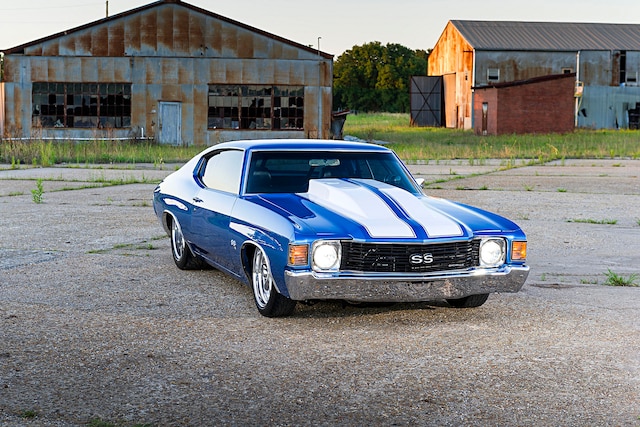 Over the years we’ve seen enough Chevelles to last several lifetimes. Like a lot of them, this one’s bagged but has a thoroughly modern engine and brandishes some of the biggest back tires known to man. It signifies a return to Pro Street but with a 21st century approach. It’s the brainchild of Nicolas Chauffe who practices his art in Breaux Bridge, Louisiana, west of New Orleans way deep in Cajun country.

When he was 8, Nic was doing brake jobs and oil changes in his pop’s garage. At first he hated it—saw it as encroachment on his freedom. He wanted to be outside playing with his pals. He reflected: “I’m happy that I was able to learn a trade that many don’t get a chance to even if they wanted.” His conscientiousness paid off early. Pops was overjoyed with his son’s vision, potential, and experience. He handed over the family 1966 C10 for Nic to tattoo.

“Any money I made doing odd jobs and at my after-school job working at a mom-and-pop auto parts store went straight into fixing up that C10,” said Nic. “By my senior year, I had the truck completed and painted. It was a great feeling to know that I built my own first vehicle and that no one gave it to me. I consider that to be one of the best lessons I ever learned, and that has helped me to succeed in life.”

His next move opened another universe. He sold the C10 and bought a 2010 Camaro. Its LS engine soon became his passion, so much so that he wanted to know everything he could about how to make them fearsome performers. For the next six years he worked as a tech in an LS performance shop. The Camaro got out of control, going from a mannerly ride to a supercharged, methanol-injected, forged bottom end bitch that went from one end of the track to the other in under 10 seconds, but after all that time and discovery “it just didn’t appeal to me as much as the old stuff always did. I sold it in 2015 and began searching for a ’72 Chevelle,” said Nic.

He found it in Virginia, and he and his dad went north after the coupe in a winter like they ain’t got in south Louisiana. Expectations rose when he saw that it was a true small-block Chevelle, no shiny numbers but the SS runes were clearly intact. As further proof, the factory buildsheet had been preserved. But Nicolas wouldn’t be sitting down to contemplate a stock automobile, no.

In 2005, the owner previous to the guy Nic dealt with had built it into a track-only tool bestowed with a Strange Engineering four-link conversion and 24-inch wheeltubs. It had a Reher-Morrison race-gas 509. Nicolas knew it wouldn’t work. “However,” he said, “the Chevelle wasn’t some hacked up race car. They’d taken a lot of care in assembly.

“The guy I bought it from was the second owner who’d already begun changing out the race car requirements to those of a street machine.” He’d put up a Painless loom and pressed sound deadener in all the right places. He’d cut out the Funny Car hoop as well as some of the ’cage stringers to make it easier to get in and out of. An ididit steering column went in. The race seats were replaced with Procar buckets.

“Back in Louisiana,” Nic said, “I removed the diagonal door bars and the bar behind the seat for faster access and more legroom. I replaced the race ’cage with a 10-point Chassis Engineering structure of 1 5/8-inch pipe. I removed the five-point harnesses and installed three-point safety belts instead, which were much more driver friendly. The next day I started building the 416 LS3. I bought a short-block assembly from Scoggin-Dickey. I’ve found that buying one ready to go is much quicker.” To complement the 416, Hard Head Race Engines in Lafayette ported the 821 castings as much as possible. Met’s Machine Shop, also in the neighborhood, skimmed the surface 0.020-inch to bring the static compression ratio to 11.5:1. Eventually, this foundation produced 640 horsepower.

Clearly, the stance and wheel/tire combination are critical because that’s what everybody sees, not what’s cloaked with metal. Nic made good use of the two-foot-wide tubs, filling them with real big M/T 31×18.00 Sportsman Radials.

Though friend and business partner Steven Garcia helped with the suspension and drivetrain, his most important contribution was the PPG custom blue mix and companion stripes flowing over the Harwood cowl hood and beyond.

Nic craved the appearance of the original interior layout but modified it smartly with a carbon-fiber dash insert popping with AutoMeter meters and a GPS feature so he’d always know exactly where he was even if he couldn’t see the sun. He built in some creature comfort around the Vintage Air HVAC and a well-stocked audio system with Bluetooth capability.

His favorite place that received the most thought and care was the engine compartment details. Next to its cleanliness, carbon-fiber accents in and about the engine bay and a fiber firewall cover tie the modern look all together.

As the sun sets, Nic imparts: “I’m always looking to making small changes and improvements as I go. Steve Garcia and I do custom LS swaps for other people’s muscle cars so we are always trying to give them a unique look and theme that fits the car’s personality, hiding the wiring, custom painting details, and we strive for a clean and simple space.”