From the Archives: Vettes Race Sebring, 1962 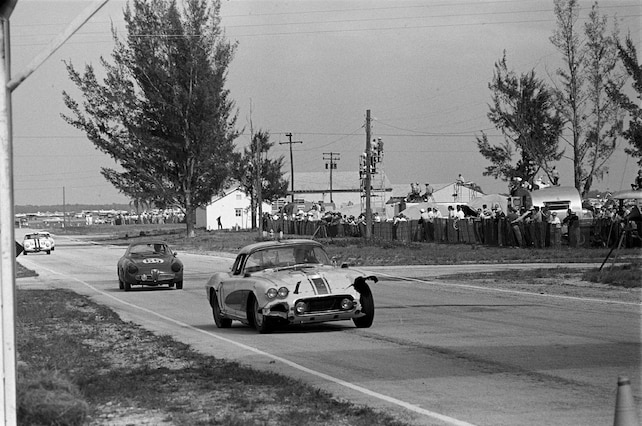 Don Yenko met Gulf Oil’s Grady Davis in 1958, formed what you might call a “fast” friendship, and worked together to build a Corvette racing team sponsored by Gulf Oil Research and Development. Davis would buy the cars from Yenko Chevrolet and then Don’s crew would prep them for racing. The 1962 models seen in these photos were equipped with the 360hp fuel-injected engines, T10 transmissions, 37-gallon fuel tanks, heavy-duty brakes and suspension, a quicker steering ratio and Positraction in the rearends.

Several drivers competed in Gulf-sponsored Corvettes, including Yenko and the “Flying Dentist” Dick Thompson. Davis, too, fielded a car on occasion.

The team began racing in 1961 and was off to a good start when Yenko took Third at the 12 Hours of Sebring. Thompson took over the reins mid-season (after Yenko was suspended from SCCA competition for using an aluminum flywheel) and won enough races to take the B/Production championship.

The team continued its winning ways in the 1962 season, which began with Thompson in the Number 2 Vette taking Second at the Daytona National race and a class win at the Daytona Continental three-hour race.

At the Sebring 12-hour race, shot by John Christy for Sports Car Graphic magazine, the Number 2 Vette won its class with Duncan Black and M.J.R. Wylie driving, while Yenko finished Second in class despite being “clobbered” in the very first lap. The two Corvettes finished 18th and 19th overall and were the first American production-based cars to finish.

Thompson returned to the Number 2 car after Sebring and finished the season with a remarkable record, winning 12 out of 14 races and the A/Production championship.

Thompson drove for the Gulf team for one more year, helping Davis with development of the 1963 Grand Sport until a dust-up between Davis and Zora Arkus-Duntov caused Davis to abruptly end his sponsorship deal.

The Number 2 car would race for another year before being returned to street duty. In the 1980s its racing provenance was rediscovered, the car was restored, and it has been sold twice at auction, in 2008 for $1.485 million, and again in 2015 for $1.65 million.