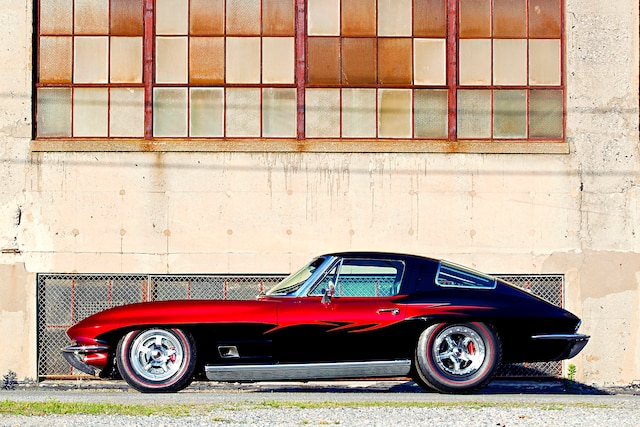 Why this all-out C2 Corvette hasn’t graced the pages of Vette magazine until now is beyond me, but better late than never! Dubbed Black Widow, this split-window coupe was built in 2012 for Rod Saboury, a drag racer who made a name for himself back in the early 1990s during the Fastest Street Car drag racing days. The car was built to go fast and look good doing it, and if the looks have yet to widen your eyes, the engineering underneath the iconic body certainly will.

Before uncovering some of the marvelous details of this Pro Street Corvette, it’s worth mentioning where the car has been over the past five or so years. After it was completed, it made an appearance at the 2012 SEMA Show in Las Vegas then sat in Rod’s garage and driven occasionally. In 2015, Rod decided to sell the car at Mecum to free up funds for other projects he was working on. The car was sold to a gentleman named Paul who, due to unfortunate circumstances, was forced to sell it after owning it for just a year. But, Paul wasn’t going to sell the car to just anyone. He knew well the history of the ’63 and its previous owner and wanted to make sure it would go to a fitting home.

In comes the current owner of Black Widow, George Silvestro who, after a convincing phone interview, purchased the car from Paul back in 2016. Supposedly, Paul never even started the car—it was rolled into a trailer then into his personal collection. George and his wife, Tammy, weren’t going to let that happen again. They make sure the car gets to stretch its legs regularly by taking it to local shows and cruise-ins on a weekly basis.

What makes this Vette so desirable is, well, everything about it—from the craftsmanship and the looks to the state-of-the-art tech. It was built by Legacy Innovations in Emigsville, Pennsylvania, and designed with the help of Rod Saboury. The Corvette started as just a birdcage so just about everything needed to be custom-fabricated. They began by building a handmade chrome-moly tube chassis that integrated suspension components from Detroit Speed Inc., including their X-Gen front suspension system. They used Detroit Speed’s QUADRALink rear suspension and swivel-links in conjunction with a Legacy Innovation-built Ford 9-inch housing and Strange Engineering’s aluminum S-Trac 3.73:1 centersection. At all four corners they used JRi shocks and PAC springs while a Detroit Speed rack-and-pinion power steering unit was installed to modernize the car’s steering feel.

Rod wanted to give the ’63 plenty of power, so a good set of brakes were a must. The guys at Legacy Innovations snagged a set of four C6 calipers from Wilwood that were custom engraved with the car’s name, Black Widow, along with drilled and slotted brake rotors. Billet Specialties 15x12 beadlock wheels wrapped in 29x15.00R15 Mickey Thompson Sportsman SR radials were fitted over the brakes in the rear and a matching set of 15x6 wheels and 26x6.00R15 tires were thrown up front.

It starts getting even more impressive when you get to the powerplant of this split-window Vette. They got ahold of a limited production LS9 crate engine from Chevrolet Performance to turn the Corvette into a C2 ZR1, of sorts. Just as a refresher, the engine is the same unit used in the C6 Corvette ZR1, which is a supercharged 6.2L beast producing 638 horsepower and 604 lb-ft of torque. Legacy Innovations built a custom oil tank to accommodate the LS9’s dry-sump oiling system, along with a carbon-fiber intake pipe. They also fabricated stainless steel headers that feed into Borla collectors and mufflers that exit the body just behind the front wheels. Sending power to the 9-inch rearend is a Tranzilla T-56 six-speed transmission built by Rockland Standard Gear.

Rod couldn’t have a Corvette with this radical a chassis and powertrain hide under a stock 1963 body so the guys at Legacy Innovations had their work cut out for them. They found an old fiberglass shell to use as their starting point, but changed just about everything on it. The floor was cut out and a completely new one was made to fit the custom chassis, then the quarters and fenders were widened 2 inches. They also made a reverse-opening carbon-fiber hood that integrates an OEM C6 ZR1 window to show off the LS9’s supercharger. Adding to the list of body mods, they mini-tubbed the rear, smoothed the firewall and hid the wiper motor. The car was then sprayed in a custom two-tone graphic with red and black paint from BASF.

The interior of the ’63 is a little more subdued than the rest of the car, but the attention to detail remains. Black leather covers the seats, steering wheel, dash and door panels while the center console was painted red to match the exterior of the car. Within the center console, a Hurst shifter sits just in front of an H-pattern placard indicating the six forward gears of the Tranzilla T-56. Keyless entry and a pushbutton start replace the old keyed system while an electronic emergency brake and Flaming River tilt steering column are also substituted for their respective OE parts. There are a few more modern touches in the cabin of this Vette but they are hidden from sight, such as the full audio system with AM/FM radio, USB and iPod connectivity functions and the Vintage Air SureFit A/C system that is sure to keep you cool—pun intended.

In its totality, this 1963 Corvette is an impressive feat of craftsmanship and technology whether you are looking at it today or when it was first built over five years ago.