A 1970 Chevrolet Camaro built for the street, but at home on the track

The Little Old Lady: A Survivor Second-Gen Camaro Becomes So Much More 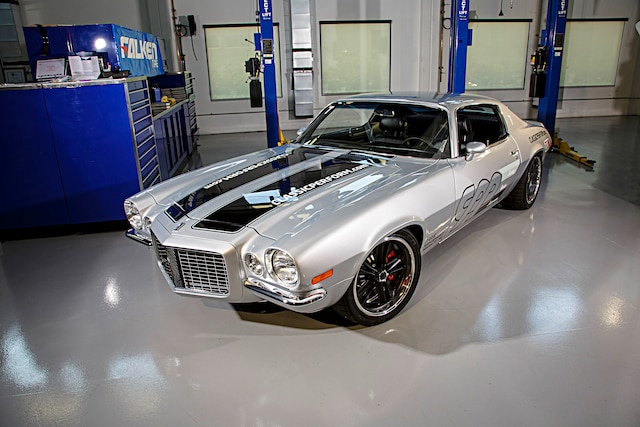 We’ve all heard stories about the cool classic car purchased from a little old lady, but nobody ever really knows the lady in question. It’s just a story that is passed from gearhead to gearhead, eventually becoming folklore of sorts. Well, we’re here to tell you a story about a real “Little Old Lady” car, which today is owned by Jim Ries of Classic Performance Products.

“I purchased this car over 10 years ago from a little old woman in Pasadena. The car was all original and in great shape so I just painted the car and put it in storage. Knowing someday I would build it using all of our parts,” Ries explained.

And so she sat, the fresh paint beckoning, waving its Camaro lineage at Ries until, finally, he resurrected her in 2016. Actually, it was a call from Super Chevy magazine, inviting Ries and Classic Performance Products in participate in the 2016 Falken Tire Super Chevy Muscle Car Challenge, which brought the beautiful Camaro out of storage. “I put it to a vote with the guys in the Research & Development Department and of all of the cars in our R&D stable they picked this car to build,” Ries says.

As the car—originally discovered thanks to Dan at Auto B Craft—was in fine shape, the build process for this machine was likely simpler than many of the other Muscle Car Challenge competitors.

Ries says the entire build process took them only three weeks from start to finish. Now, it’s entirely possible they were able to do it so quickly because the CPP team had decades upon decades of experience in the classic Chevrolet restoration business—with Ries clocking in over four decades on his own. Ries claims the process was easy, and everything went together quite well. To build an entire Pro Touring-style car in a span of three weeks seems like a monstrous undertaking, but the process is eased substantially when there is no engine or transmission to put together from scratch. One trend we’ve noticed that has taken hold in this community is the use of Chevrolet Performance crate engines—typically of the LS3 variety—backed by a factory electronically controlled automatic transmission or a manual gearbox.

Like many of the other vehicles at the Muscle Car Challenge, a 6.2-liter LS3 crate engine from Chevrolet Performance is under the hood. A set of CPP’s LS manifolds feed a stainless exhaust system built by Muffler Man in Placentia, California. The engine is backed by a 2016 4L75E transmission, which spins the power back through the Inland Empire Driveline driveshaft. A Shift Works shifter helps pick the right gear.

Is it tough to cut up a survivor car to put in a set of rear tubs? We’d have to guess that it absolutely is, but the fit and finish of the Classic Performance Products kit makes the process easy. But the CPP team did more than just tub this Camaro—lots more, in fact!

Although it’s not a full chassis car like some of the others at the Muscle Car Challenge, nearly every component underneath has been replaced or modified in some way, as the CPP team installed their Stage IV Pro-Touring Kit (PTK4).

In the front, the company’s Totally Tubular upper and lower control arms work in conjunction with CPP’s Corvette Conversion spindles and 500-series steering system to hold the road. A set of 550 lb/in CPP springs sits on a set of Viking double-adjustable shocks, and one of CPP’s monster 1 3/8-inch tubular antiroll bars is installed.

The rear suspension centers around a set of CPP’s Narrow Offset Dropped Leaf springs, which is very different from some of the other suspension systems we’ve seen from the Muscle Car Challenge. A Currie 9-inch rearend houses an Eaton Truetrac diff, a set of 3.89 gears, and wears another pair of Viking double-adjustable shocks. CPP traction bars, spring pads, tie plates, and subframe connectors are also in the performance mix.

By incorporating the company’s Corvette Conversion spindles it permits the use of CPP’s own 13-inch rotor, dual-piston caliper front brake system, which includes a CPP aluminum master cylinder, an adjustable proportioning valve, and their Hydra Stop hydraulic booster. Their 12-inch rotor, single-piston caliper brakes are installed in the rear.

It helps to remember that this Camaro is not an all-out competition piece like some of the others we’ve previously featured from the event. It is filled with traditional street-style gear that won’t rattle your teeth out over bumps or detach your retinas from the back of your eyeballs under hard braking. In short, it’s equipment—mostly bolt-ons—you can install onto a typical street car and be assured they will fit right the first time. These are parts that perform to your expectations without completely wrecking the budget.

As the car was painted over a decade ago, it wears a Mercedes silver hue from 2006. The all-steel body has been smoothed out by Auto B Craft, and Ries was lucky that none of the additional running gear needed to be replaced prior to paint. Sometimes it really does pay to buy a car from a little old lady in Pasadena.