This twin-turbo, LS1-equipped Nova is a consistent show winner

Time For a Change: After building cars for others, Ken Rice decides to finally craft a twin-turbo Nova for himself 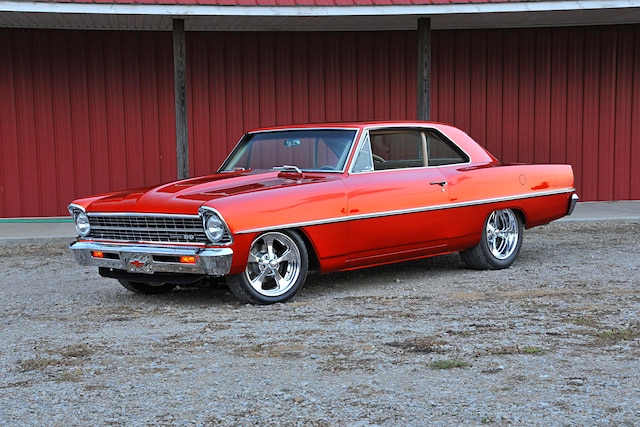 Some folks are lucky having a job and hobby that blend together. During the day, Ken Rice, from Russiaville, Indiana, worked as an electrician on the GM assembly line in Kokomo, Indiana. After hours, he worked on hot rods, building more than 20 cars over the years for customers and friends in his well-equipped home shop. Now retired from GM, he decided it was time to head in a new direction and create one of his own. He’s had several Novas over the years so nostalgia played a role when it came time to select his retirement vehicle. Luck was a factor, too, with Ken discovering his future ride at a swap meet in Indianapolis. Unfortunately, his luck ran out during mediablasting. He thought he had bought a nice 1967 Nova and felt he paid premium money, but as each inspection process went a little deeper, the car proved to be a combination of filler and rust.

The disassembly began in earnest and once the fresh metal additions were complete, Ken had replaced everything but the quarter-panels, roof, and doors. Even the firewall was new. With the body finally solid, the rejuvenation process moved forward with a framerail kit from Jegs that he adapted to fit, adding 2x3-inch rails of his own design as chassis stiffeners. He added a TCI Engineering four-link kit with adjustable QA1 coilovers and Panhard bar in the rear along with a TCI front end with tubular A-arms, 2-inch drop spindles, and Mustang power rack-and-pinion steering. The aftermarket suspension upgrades were augmented with GM disc brakes, giving the half-century-old ride slot-car-like handling.

Since the powertrain is the heart of any build and there are a lot of high-performance Novas out there, making one stand out takes a certain amount of creativity. As Ken recalled, “I’ve had it in my mind for about five years to do a twin-turbo setup and this was the time.” His 364ci 6.0L LS uses an iron block with GM 317 aluminum heads that have been CNC ported and polished. Power-adders were carefully tailored thanks to Chuck Stefanski at Big Three Racing. Ken was the maestro in charge of the symmetrical arrangement you see when you first pop the hood. The showpiece of an engine uses a Weiand LS1 manifold, twin Turbonetics 62mm turbos, Trick Flow 80-pound injectors, and a pair of K&N filters.

Reprogrammed GM electronic ignition lights the fire and spent gasses travel to the highly modified stainless steel exhaust system. It begins with manifolds from Speedway Motors with the flanges cut off, turned upside down, and then reestablished to fit the block with the turbos installed. Everything was Jet-Hot coated, and Pypes Race Pro mufflers create the appropriate performance rumble. The bottom portions of the inner fender panels were removed to make room for the turbo exit pipes while the upper portions were crafted to hold the turbo inlet tubing. Ken says “It was a challenge since the Nova has such a small engine bay, so everything required careful fitting.”

The painted-to-match engine bay showcases the engine, now boasting polished valve covers, turbo housings, and plenum. Custom hood hinges hold the cowl-induction hood, the underside of which was panel-bonded with aluminum for a smooth look.

All the performance work paid off with dyno numbers registering 816 hp at the flywheel and 680 hp at the rear wheels. The engine feeds a TREMEC T-56 six-speed manual with a McLeod RXT twin-disc clutch. The team from RPM Transmissions in Anderson, Indiana, added their Level IV Slick Shift package and Ken smiles when he says “it works really well!” The rear is a 9-inch Ford with 3.50 gears, Strange centersection, and Moser Positraction and axles.

The Nova rolls on Billet Specialties Hiboys, which are rims he saw in Super Chevy magazine about five years ago. They arrived looking even better than he remembered. Sizes are 17x7 in the front and 17x10 in the rear. BFGoodrich G-Force (205/40/17) tires up front handle steering and stopping chores while the fat Mickey Thompson rubber in the rear (295/40/17) plants the power.

Body mods began with a Goodmark steel cowl-induction hood that adds an aggressive profile and provides plenty of fresh air to the turbos. Goodmark bumpers, chrome grille, LED taillights, and SS badging added to the look. The car has a full bellypan, making the bottom as pretty as the top. Ken has been doing show car paintjobs for many years and sprayed the DuPont Hot Hues Molten Orange in his shop.

The interior was done by John Travis, owner of Coverall in Martinsville, Indiana. Ken chose the colors and left the artistry up to John. The new center console, separating the 1997 Monte Carlo buckets, holds the Hurst shifter. Distressed tan leather covers the console, seats, and door panels, all with matching pleats. The dash is original but Ken eliminated the GM padding then welded up the defroster vents and radio opening, adding Vintage Air, auxiliary boost gauges, and a Dakota Digital VHX gauge package. The trunk was upholstered to match. An unusual touch, the interior features a full NHRA-certified, 10-point chromoly rollcage, good for 8.50 seconds or slower, just in case Ken wants to go racing someday. “When you have a fast street car like this, sometimes it’s fun to find out actually how fast it is. I don’t intend to race it but I would like to try out a few test and tunes.” And, speaking of tunes, there is no stereo. Motor music keeps Ken continuously entertained. Some of the other race-related aspects of the car can be seen on the passenger side taillight with the built-in NHRA shut-off.

Ken’s original plan was to create a driveable show car and says the only time it’s been in a trailer is for an out-of-state car show, done primarily for security. The three-year build has been complete for about a year with Ken and his wife, Mila, driving it at every opportunity. We photographed the car at the Super Chevy event in Ohio where it finished in the top three. Ken sends special thanks to Mike Slusher, Bill Chapel, and Ed Bean for their help in creating his dream car, and extra special appreciation goes to Mila, Ken’s wife and “cheerleader” for always providing enthusiasm and motivation for his turbocharged retirement car.