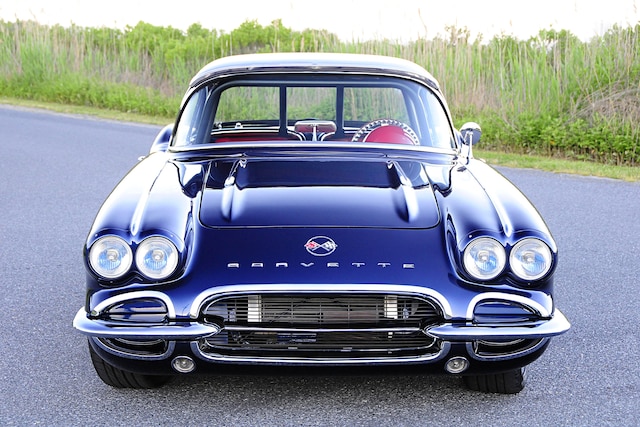 Inspiration and desire comes to us in many interesting ways often starting in our youth, many times following us throughout our lives. Sometimes it’s in the simplest of forms which leaves a long lasting impression as we age. This leads us to posing the question of “how long would you wait for something that could quite possibly change your life”? Well, for Bryan Wilde of Huntingtown, Maryland, he carried a torch for this particular C1 for 40 years and it’s a remarkable journey.

His earliest memories revolve around weekends with his cousin Steve Reed in the mid ‘70s as the as the pair would often spend time in the Reed family garage building kit models. To them the shop was a virtual fantasy land packed with Automobilia making it a perfect place to hang around as they brought their dreams to life through stacks of rodding magazines, Hot Wheels cars and kit models of the latest hot rods and race cars. The most exciting facet to Bryan however was that Steve’s dad Fred had recently purchased a non-running Roman Red 1962 Corvette and that it was parked right in front of the workbench they frequented. It was there he would spend endless hours dreaming of what it would be like to drive the Corvette and experience first-had the exhilaration of being behind the wheel.

As the years passed the Corvette never left its spot in the shop since Steve and Fred had focused themselves on street rods while Brian had started the build of a 1956 Chevy 210 sedan as his first car at age 15. He would often see them while cruising to cool spots like the Annapolis docks and the local Dairy Queen to check out the scene. At the same time Brian’s dad, Thalbert would take him to Maryland International Raceway (MIR) to firsthand see all the action since he had a friend who raced a Corvette there on a regular basis. The pair also frequented the World of Wheels show together when it was held at the DC Armory. Bryan continued to hone his car building skills to where he would race the ’56 at MIR during their Friday Night Madness competitions. He eventually tore the car down again, this time giving it a full rebuild as an ISCA winning show car. As the decades passed one thing remained constant, his passion for the 1962 Corvette that was still parked in the Reed family garage since he would still see it on a regular basis. Sadly a few years ago both Steve and Fred passed away, leaving the collection to Fred’s wife Lois. Knowing that Bryan had always loved the C1 and that he would be the right person to take the project on, a deal was made making him the new owner as long as he promised to take her for a drive once it was finished.

Suddenly 40-years worth of dreams to own the car suddenly became real and all the time spent since his youth building it in his mind were about to get started in his shop. Since the C1 had a non-matching 327ci V-8 pinned to the ‘rails his thoughts of restoration were in the rear view mirror as he embarked on tearing the car down to bare bones with good friend Bobby Sheehi. The initial concept was to build a C1 that would have a streetable 600hp on tap and be able to handle double-duty on the drag strip while maintaining razor-sharp handling and interior comfort for the street. Seeing that the original spine was in solid condition it was blasted clean to prepare it for upgrades.

It takes plenty of planning to add just the right amount of horsepower to your build. Wanting a serious injection of power Bryan contacted Blue Print Engines of Kearney, Nebraska, for one of their fierce 427ci LS-Series V-8’s. For a rock-solid base Blue Print starts with a fresh Chevrolet Performance LS-Series L92/LS3 aluminum 6.2L block featuring deep-skirt casting and 6-bolt cross-bolted main caps. It’s then massaged to perfection and filled it with a forged steel crank linked to forged I-beam rods capped with Mahle forged pistons. A custom hydraulic roller cam sets the beat while a pair of Blue Print’s own aluminum cylinder heads makes plenty of power. Up top a Chevrolet Performance LS3 intake manifold assembly features a 90mm ETC throttle body and 42lb injectors fed by a Magna Fuel MP-4301 pump while spent gasses move through a set of Speedway Motors stainless headers to a 3-inch stainless exhaust with Thrush stainless mufflers, exiting through the lower front of the rear quarter panels. Custom updates included a 4-inch aluminum cold air induction routed into the front valance panel as well as custom fabbed injector covers. To move the goods a Tremec T56 Magnum six-speed manual trans packs a McLeod twin-disc clutch linked to a custom 3-inch driveshaft from Driveshaft Specialist of San Antonio, Texas. The combination is good for a searing 625hp on the dyno providing the C1 with plenty of getaway power.

When it came time to addressing the body; the fact that the car had sat in dry storage for the last 40-years certainly made matters easier. Aside from a few stress cracks to repair it was in nice clean overall condition. Bryan got busy outlining a number of updates to the body and got busy starting with shaving the door locks, washer nozzles and front plate bracket. Wanting to keep it a true hardtop / soft top car meant massaging the inner wheel wells and quarter panels to be able to accommodate the top as well as the 10-inch wide tires. He then moved on with molding the firewall along with the inner fenders as well as the underside of the hood and decklid, trans tunnel and entire trunk. From there he and Bobby set all the gaps, blocked the body to perfection and prepared it for paint. Steve Lagana of Mechanicsville then laid down the custom-blended PPG Envirobase deep blue pearl vibe accented by House of Kolor Kosmos Red in the engine bay, bringing it all to life.

Since the car was going to also spend time on the dragstrip it was important to design a rollcage to keep it all safe while working within the tight confines of the C1 interior. The 1 5/8-inch chromoly cage was designed and installed by the pair while also filling the factory dash with dials from Corvette Specialties of MD West. Steering is through a Billet Specialties wheel linked to an ididit column while shifts move through a unit from Speed Unlimited. To add plenty of style the interior was then handed over to Joes Superior Interiors of Clinton, Maryland, to wrap the C1 seats, custom trans tunnel and related panels in soft-touch red vinyl accented by an Al Knoch Interiors dash pad, complimenting loop carpeting, black convertible top and an RJS Racing Equipment race harnesses. Bryan kept his word and upon completion of the project and made sure he took Lois for the first ride in the car. He would like to thank his wife Julie as well as his children Taylor, Paige and Christopher for all their support during the project. Future plans include preparing it to run at Maryland International Raceway and Capitol Raceway in the Nostalgia Class as well as serve plenty of miles on the street and to us that’s just plain cool.