Blown Away: Bob Matranga Blasts to the Past 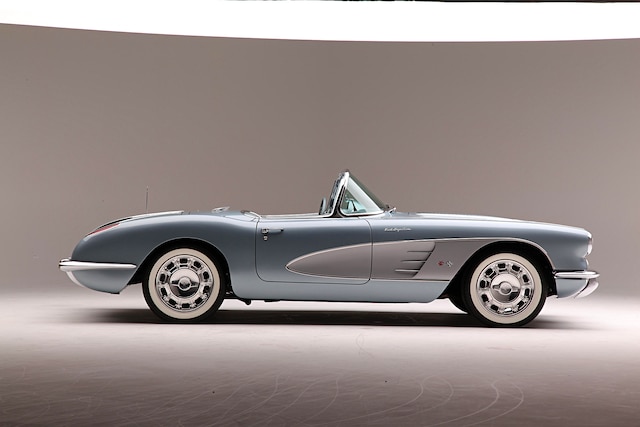 Money can’t undo every mistake a person makes in their life, but it sure helps when it comes to buying back a part of one’s youth. Such was the case for Bob Matranga and his affection for the 1958 Corvette he once owned. Looking back, Bob recalled his first ’58 had a cylinder that liked to foul a plug every couple of days so he kept an eight-pack of AC 44s and a 13/16-plug socket in the trunk.

It wasn’t the memory of changing spark plugs out in the field that endeared a ’58 Corvette to Bob’s heart; it was the distinctive washboard hood and twin chrome spears on the trunk. So when Bob spotted lot 1288 at Barrett-Jackson’s 2017 Las Vegas auction all bets were on this ’58 becoming his.

It wasn’t hard for Bob to research the origins of the ’58 before it crossed the block. A quick read of Barrett-Jackson’s catalog description revealed, “Lot #1288 - Previously part of a private collection, this Corvette illustrates a unique approach to Resto-Modding. Constructed by Greg Thurmond of GTS Customs in Simi Valley, California, it was conceived to closely preserve its stock appearance while incorporating a host of performance, handling and comfort enhancements.” Bingo, a quick Google search brings up GTS Customs’ website, and the ’58 is listed in the gallery as custom built for Tom Lettieri. Greg Thurmond of GTS Customs grew up working in his dad’s custom upholstery shop and attributed his father’s many Corvettes and L88-powered flatbottom boats to turning him into a Corvette guy. “My dad was always building and painting something in our garage as I was growing up. I learned to paint at an early age, as well as turn wrenches.

It is entirely possible to re-create a 1958 Corvette using an aftermarket body and rolling chassis. Instead, GTS Customs started with a genuine Chevrolet issue 1958 Corvette and proceeded with their tried-and-true build formula. The platform began with a stock 1958 C1 frame that was upgraded to IRS (independent rear suspension) by Newman Car Creations to adapt an IRS from a 1996 C4 Corvette. Made in-house by GTS Customs are transverse mounted Bilstein shocks with a proprietary adjustable cantilever design. Ramjet assembled the Dana 44 differential packing 3.73 gears with limited-slip. The custom aluminum driveshaft came from Wenco Industries of Van Nuys, California.

Under the one-year only washboard-style hood, power comes from an LS2 engine detailed with a body-colored engine cover. The cooling system is a four-row BeCool aluminum radiator in concert with Messier oil cooler mounted behind a stock grille. Exhaust exits the LS2 by means of stock C6 manifolds through a pair of MagnaFlow stainless steel mufflers. Gear changes take place via a TREMEC SSR/T-56 six-speed transmission with a Centerforce 11-inch DYAD clutch. A custom bezel indicates a six-speed shift pattern.

Outrageous Paint by GTS Customs is the name GTS Customs’ in-house paint and body shop goes by. Greg sprayed a gray resin sealer from BASF Diamont before spraying the topcoats. The BASF Diamont light metallic blue body color is based on the 2,006 1958 Corvettes that were painted Silver Blue, or to narrow it down since it has silver coves the 756 1958 Corvettes that left St. Louis with Inca Silver coves. In the rear, to accommodate the wider tires and match up with the track of the Newman chassis, Greg ’glassed on a set of GTS Customs 1.5-inch increase rear quarters. The subtle increase in width allows for a lot more tire than stock.

It’s not common for a customizing shop that builds a car from the ground up to handle the paint and bodywork, plus the interior work all in-house, but Thurmond’s years spent working in his dad’s upholstery shop honed his skills to turn out show-quality paint and custom interiors. The interior color choices to go with Silver Blue in 1958 were blue/gray or charcoal. Instead of stitching a restoration-style vinyl interior, GTS Customs custom-shaped high-density foam creating bucket seats from scratch and then covered them in metallic Silver Blue leather hides. A stock feel with a custom touch is maintained via a shrunken ’58 Corvette steering wheel, restored gauges and AM/FM radio. Speaking from personal experience, not everyone can afford to track down a reasonable facsimile of their first Corvette decades later, but things went well for Bob. The construction company Bob founded became very successful, and the son he and his wife raised grew up to like cars as much as he does. It’s been about 20 years since Bob and his son Kent dove into car collecting. Kent’s ’57 Bel Air and Bob’s ’40 Ford quickly expanded into 50-plus cars. The two have a building in Orange County where they build from scratch or improve on cars bought at auction. Bob told Vette his GTS Customs-built ’58 Corvette is the best sorted and engineered car he’s bought at auction.

An indication of just how serious Bob and Kent Matranga have become when it comes to cars is the Chris Brown-designed Ridler attempt being built by Bob, Kent and Chris at the Matranga’s Orange County, California, shop.