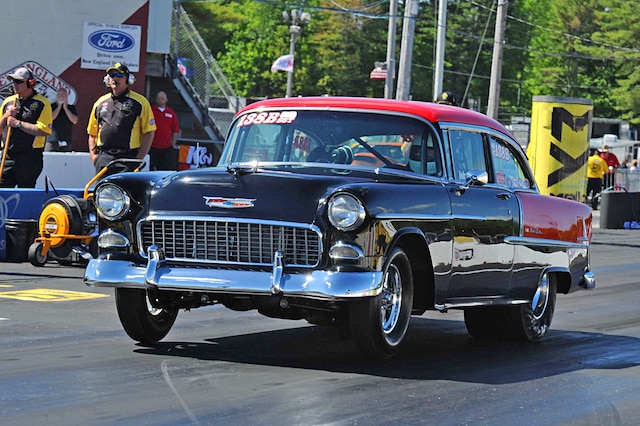 Hard core Chevy drag racing fans in the Northeast have plenty to enjoy when John Harper (Wiscasset, Maine) shows up at the races with his absolutely amazing 1955 Chevy Bel Air.

Harper races a top-level car he purchased three years ago from expert race car builder Bob Mandell’s Bob’s Pro-Fab shop (Culleoka, Tennessee). According to Harper, “This car is an honest to goodness barn find—an all-original taken from storage after 18 years.”

Harper’s son Matt, who races very successfully in Top Sportsman with his own GM car, was also heavily involved in the project. He went completely through the car, including updating the front suspension, installing disc brakes, and rewiring it.

“This is an all-steel car with a full interior, and everything original on the car works,” Harper revealed. “Even the paint is exactly as it was found in storage, which is close to 30-years old!”

The final product certainly speaks volumes. Since its debut, the ’55 has been awarded Best Appearing at three different NHRA events held at Harper’s home track of New England Dragway in Epping, New Hampshire.

The engine consists of a Steve Schmidt-prepared 555ci big-block, which Harper revealed produces just short of 1,000 hp on the dyno. Some of the engine’s important components include Dart cylinder heads, Manley rods, JE pistons, and a Jesel valvetrain.

When racing, Harper for the most part, targets the 10.90 Super Street class using a throttle stop and carburetor prepped by Dale Cubic.

The transmission is a Powerglide built by Gary Kaye from Kaye Racing Powerglides (Westborough, Massachusetts). Behind the Powerglide is an FTI converter.

We show how to install a Roadster Shop Spec Series chassis under a Tri-Five Chevy.