Scrapper’s Delight: Intentionally trashy looking, Andy and Debra Bond’s 210 is quite a treasure 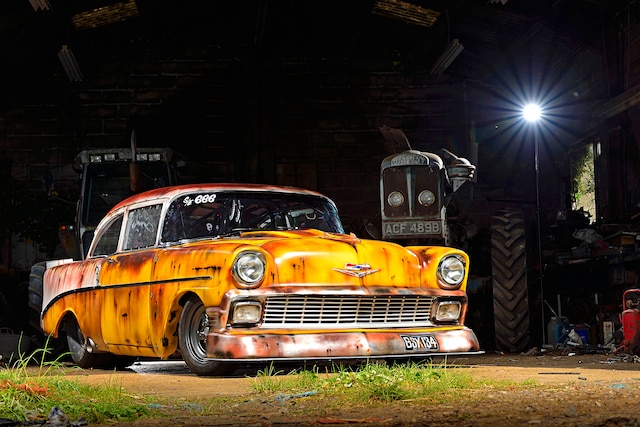 What do you do when you’ve outdone yourself? It’s a real problem for some of us. Andy Bond certainly found himself in that position. A series of builds, each increasingly nicer than the last, produced a hard act to follow—an immaculate 1955 210 sedan. So a noteworthy follow-up was well-nigh impossible.

But then it struck him: Why not build the worst of show, give it 2,500 bhp, and drive it on the road?

The opportunity arose in the shape of an already derelict 1956 210 sedan. “It was a tired old U.K. street racer that had been laid up in Scotland for a few years,” says the motor salvage broker (he buys and sells used-car parts). “A rolling shell battle-scarred by a few hard-earned trophies,” he adds.

He delivered the hulk to Martin “Brain” Kerr at Tubeworks Custom Fabrication in Cheltenham (in England, for future references). There, the chassis got updated from SFI Spec 25.1 to 25.3—all 4130-series tubing.

He delivered a fat-block to ICE Automotive in Silverstone. Nick Davies and Rob Loaring poked and stroked it to 650 ci. A 4.675-inch-stroke Bryant crank swings Oliver rods and 4.75-inch-bore ICE Automotive pistons. An ICE Automotive billet roller camshaft and Jesel rockers pop the valves in a set of Brodix cylinder heads.

Those gobs go through a ProTorque torque converter into a Rossler Turbo-Glide (a two-speed TH400). Greater amounts of those gobs go to a Mark Williams modular axle by way of a Mark Williams driveshaft modified by Tubeworks. That rear axle houses a Strange Engineering aluminum 9-inch case, which mounts a 3:1 gear on a 35-spline limited-slip carrier and Strange axleshafts. The housing mounts to the chassis by way of a bolt-on four-link with an antiroll bar and a sliding-mount Panhard bar.

As impressive as it seems, that kit pretty much gets outshined by the exterior finish. Nick Williams at OCS Paint in Northamptonshire built up a foundation from bare steel and composites and applied the white and Daytona Yellow pigment. Then Neil and Jacob Melliard at Prosign did the graphics.

The pattern suggests otherwise but there’s hardly anything tattered about that body. In fact, all that remains of the original parts is the roof, quarters, and bulkhead. DRE Racecar Composites built the nose, doors, and two-piece trunk from carbon fiber. Tubeworks handmade the aluminum grille insert and the rear bumper. Marguard made the polycarbonate windows.

Following the race car philosophy, the interior is sparse: a MoTeC C127 data logging display, JAZ aluminum seats, a MOMO wheel on a Strange Engineering quick-release hub, and an 8-track. An 8-track that perpetually plays Chuck Berry, according to Andy.

It’s rusty. It’s crusty. But Andy and Debra Bond’s ’56 may well be the worst of show. But at the same time, it might be well-nigh impossible to beat. Whatever the case, Andy’s kinda painted himself into a corner if he expects to top this.

» Read More
This twin-turbo, LQ9-powered 1956 210 sedan proves that it isn’t just the two-door Chevys that are worthy of customizing

Anthony Penna decided to build a badass Pro Street 1956 Chevy 210 out of a four-door sedan instead of a two-door coupe, resulting in a nearly 800hp twin-turbo family cruiser.

This 1956 Chevy 210 wasn’t built to compete at car shows (although it could) or run at racetracks. It was built to hit the highway and be as fun to drive as it is dependable. With a big-block crate engine it’s got enough power to make you smile and the upgrades modernizes the ride without killing the retro vibe.

Donas Singleton knew he had to have this 1956 Chevy Bel Air 210 the first time he saw it. After a little bit of elbow grease, his dream car goals have been realized.

This 1956 Chevrolet 210 is still a work in progress but check out all the specs and video as we tested the Heidts IRS!

Joe and Josh Bailey’s amazing 1956 Chevrolet 210 Sport Coupe started out as a junkyard find. Read about its transformation to the beauty it is today.