Fast Tracking: In a hobby where projects take years to get done we knock one out in a mere seven days 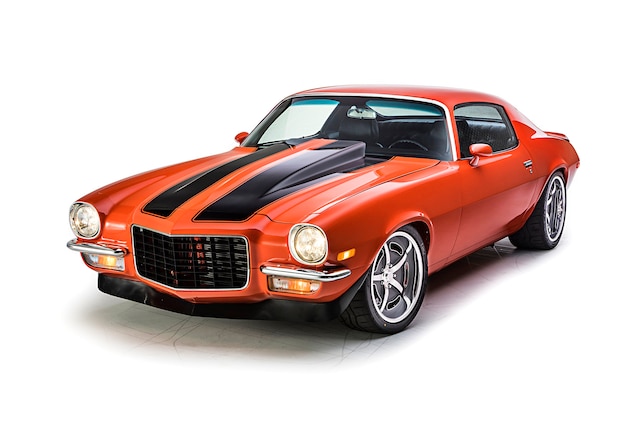 Most of the time project cars take a long time to get done. Why? Well, as we’ve opined before sometimes it’s time and sometimes it’s money. The more you have of either of those (or better, both of those) the faster your project will go from neurons firing in your grey matter to reality. Of course, starting with a decent car can get you from point A to point Z a whole lot faster, too. We’ve done this dance before so when we decided to tackle another Week To Wicked project—the deal where we take a stockish ride and transform it into a bad mama jamma in just seven days—we knew the starting car couldn’t be a basket case. After all, it’s lovingly (well, not really) referred to as paint jail for a reason, so the search began for a Camaro that was mostly stock, but fully bodyworked and painted. Eventually our odyssey led us to a Hugger Orange ’72 Camaro project that had stalled out shortly after getting painted. Going by the smoothed-out and body-colored firewall, we’re pretty sure it wasn’t going to be restored. This was especially evident when we crawled under the car and spied cubic meters of more orange paint. The best part about this is that we could tell the floors were solid along with the rest of the car. As a bonus there wasn’t a smidgen of grime anywhere and the front subframe had been cleaned up and powdercoated black.

In the negative column was the fact that the Camaro was missing its drivetrain and interior, and had a 4-inch cowl hood that fit like OJ’s glove. But it was a solid car in a great color so we dragged it back to our shop where Jason Scudellari, our tech center manager, could start figuring out what was missing. We typically start Week To Wicked projects with a complete, running car so first up was dropping in a spare drivetrain and getting the Camaro to a stockish state. After all, it would be cheating a bit if we pushed a stripped-down shell into the tech center to begin the build. Besides, driving it in stock form gives us something to compare the finished car against. So before we could start we first had to finish the Camaro by scrounging up a used drivetrain and making more than few parts runs to Classic Industries for widgets and interior bits.

With the ’72 a functioning, albeit slow and unremarkable, automobile we came up with a game plan to turn it into something special. We wanted LS power, because, duh, it’s awesome and because we wanted to hit some driving events and knew nothing puts out the power while keeping the weight down like an all-aluminum LS mill. The gearheads over at Scoggin-Dickey Parts Center (SDPC to those in the know) hooked us up with a sweet 530hp LS376/515. Think of it as a crate LS3, but with a bigger cam and set up for a carburetor. Instead of tossing on the typical LS intake we decided to change things up a bit and added a Holley intake along with their Terminator Stealth EFI system. The stealth part of the name is because the throttle body mimics a carb right down to the linkage and fake fuel bowls (which really hide the fuel injectors). It’s a new combo for us so we put it all together, along with an ignition system (plugs, wires, and coils) from E3 and scooted it over to Westech for a few pulls on their engine dyno. Controlled by a Holley ECU, the Chevrolet Performance crate engine spun out 540 hp through a set of Hooker 1 7/8-inch LS swap headers. For giggles we added a NOS Cheater system that ratcheted the horsepower number up to 660 ponies.

With the Camaro back to stock(ish) and the engine validated we were ready to click the go button on our seven day clock. Big tires are just cool, so to house our future Falken RT615K+ 315/30/18 tires we needed deeper rear wheeltubs. To get this done, Classic Performance Products (CPP) came over and stitched in their deep-tub kit. It’s a messy job so not much else happened during those two days. With almost two days burned we drove the Camaro into the tech center on Monday and started blowing it apart, which is always a fun part of any project. By lunch the car was stripped bare and there was a huge pile of stock suspension, drivetrain, and miscellaneous parts over in the corner of the shop. CPP came back to install their PTK4 suspension kit, which included big-brakes, tubular control arms, bigger sway bars, double-adjustable billet shocks, and a rear-shock relocation kit that would ensure those big Falken tires wouldn’t rub even while retaining leaf springs. This was also when Energy Suspension dropped by with fresh urethane body, engine, and other mounts. While that was going one the rest of the team was busy prepping the EFI-ready Holley Sniper fuel tank as well as the 9-inch supplied by CPP.

The rest of the week was a blur of wrenches, a few words that had to be bleeped out for the videos, and lots of parts. While the Camaro was getting completely rewired by Painless Performance, Jason Scudellari and Christian Arriero installed the Eddie Motorsports 8-rib serpentine system on the SDPC crate engine and prepped it for install by adding the LS engine mounts from the Holley swap kit. The wiring always takes a while and Jeff Abbott, of Painless, had the added work of integrating the wiring from the Holley EFI ECU and the Performance Automatic Smart Shift transmission controller (for the Performance Automatic PAGM Street Smart 4L70E) with the rest of the car’s wiring. We also took that time to add upgraded headlights and LED taillights from United Pacific.

Of course, to get the car on the ground for wiring we needed it to roll, so when the 18-inch American Legend wheels showed up we quickly mounted up our 275/35/18 front and 315/30/18 rear Falken RT615K+ tires and slapped them on the Camaro. At this point, with the drivetrain installed and new wheels bolted on, the car felt almost done, but it was Wednesday and we still had a lot to do. Remember that awful hood? Well, the moment it came off the car on Monday it was sent over to Best Of Show in Escondido, California, so they could measure the stripes and match the color for the steel 2-inch cowl hood from Golden Star Classic Auto Parts. When it showed up from BOS it was still warm from the paint booth.

These projects are composed of a ton of small tasks that in totality eat up a bunch of time. It’s the automotive equivalent of “a death by a thousand cuts.” Installing the ididit tilt steering column or bolting up the Inland Empire Driveline 3.5-inch aluminum driveshaft are small jobs but a lot of small tasks like that can end up consuming an entire day, which is what happened on Thursday. A few hours to bolt the Hooker Blackheart exhaust to the Hooker long-tube stainless headers, another couple of hours to put the Dakota Digital HDX dash in place and tie it into the Holley ECU and Painless wiring, half a day to bolt in the Holley Frostbite radiator and plumb it to the car. Another hour for the ProCar by Scat Rally Smoothback seats, and even smaller projects like billet sill plates from Eddie Motorsports and a trick Clayton Machine Works pedal assembly. Add these up, along with a dozen other “things to do” and day four was toast. Oh, remember the NOS nitrous kit from the engine dyno? Well, that had to be installed as well.

Friday, much like Thursday, was an avalanche of small tasks, filling fluids, bleeding brakes, including the CPP Hydra Stop system, fixing a small leak here, and finding a loose bolt there. Adding Classic Industries split front bumpers to replace the original single piece was one of our final tasks. Toward the end of the day we fired up the Camaro for the first time, and after chasing a gremlin or two drove it out back to our favorite burnout spot and destroyed our first pair of rear tires. We’re pretty confident they won’t be the last ones sent to tire Valhalla. We did what all car guys dream of, knocking out our project in short order. And while the build team was exhausted, hearing that LS engine scream and watching tire smoke billow made it all worthwhile. A few weeks later we drove it to Las Vegas for the Holley LS Fest West and beat the snot out of it on the track and it even went on the Hot Rod Power Tour, two tests that show we built a driver and not just some static display piece. For now we’re just going to enjoy our reborn Camaro and start planning our next weeklong project.

More on our Week to Wicked 1972 Camaro Build!