From the Archives: “The Type of Car Only True Enthusiasts Will Appreciate” 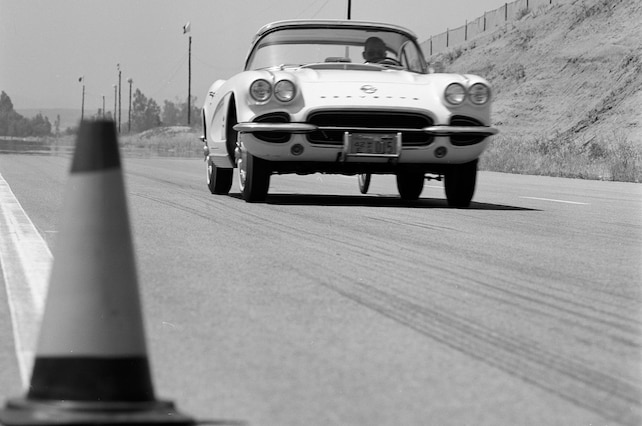 With those words, Motor Trend’s Technical Editor Jim Wright summed up his driving impression of a 1962 Vette in the magazine’s Aug. 1962 issue. Why the exclusivity? “This is an exciting high-performance automobile with real hair on its chest,” he wrote of his test car, which was equipped with the top-of-the-line fuel-injected V-8.

For 1962, the Corvette got a new engine, a bored and stroked version of the previous year’s 283-inch V-8 brought up to 327 cubic inches. In base, carbureted trim, the extra displacement raised the small-block’s output from 230 to 250 hp; add fuel injection, a hotter, solid lifter cam and higher compression and the new engine put out 360 hp versus the injected 283’s 315. “This represents 1.1 hp per cubic inch,” said Wright, “which is not bad at all—Ferrari 250 GTs put out only two-tenths more horsepower per cubic inch, and they cost almost four times as much.”

Backing the fuelie was a close-ratio four-speed manual transmission and a Positraction differential with 3.70 gears. “This car happened to be the workhorse of the local Chevrolet zone office and had over 5,000 miles logged on it by everybody from their janitor to such visiting firemen as astronaut Alan B. Shepard, who had it just before MT. We didn’t get a chance to ask him how the car compared to his space capsule, but we’ll bet the Vette had a better e.t. for the first quarter-mile.”

(For those of you not steeped in early NASA history, Shepard was the first American in space, his Freedom 7 Mercury capsule taking him on a 15-minute, sub-orbital flight in May 1961. We could not find a quarter-mile e.t. for the Mercury-Redstone rocket that Shepard rode into space, but according to NASA, it had a velocity of 5,134 mph. Beat that, Zora.)

Back on Mother Earth, Wright drove the Vette from 0-60 in 5.9 seconds and through the quarter-mile in 14.9 seconds at 102.5 mph. “The car felt and sounded healthy when we picked it up, so we didn’t do anything to it in the way of tuning,” he said. Disappointed in the results of his acceleration tests, he noted, “This goes to show that the stock 6.70x15 boots aren’t the answer for traction. No amount of experimenting off the line could keep the tires from smoking, clear to Second gear. Several top-end runs produced an honest 132 mph long before the end of the Riverside straight.”

The Rochester fuel injection “worked perfectly,” Wright said. “It was very responsive at any rpm in any gear. Even when idling along at 1,500 rpm in Fourth cog, the throttle can be floored and the car will take off strongly without missing a beat. In fact, around town we seldom used any gears except First and Fourth.”

Wright said the stock suspension, with coil springs up front and leaves with the solid rear axle, “feels just about right—a trifle on the hard side, but we, personally, wouldn’t want it any softer. We had it up on our favorite mountain road and found we had no trouble negotiating the curves 20 to 25 mph faster than we’ve been taking them in sedans. The Vette is rock-steady and dead-flat in the corners.”

The 1962 model brought an end to the Corvette’s first generation. The much-anticipated, Mako-Shark-inspired Sting Ray was just around the corner when Wright drove this car for PPC photographer Bob D’Olivo in May 1962, though no mention was made in the story of the upcoming new car. Instead, Wright set the stage for the C1’s swan song by saying “Chevrolet’s sporting thoroughbred still sets the pace for performance with a Yankee accent.”