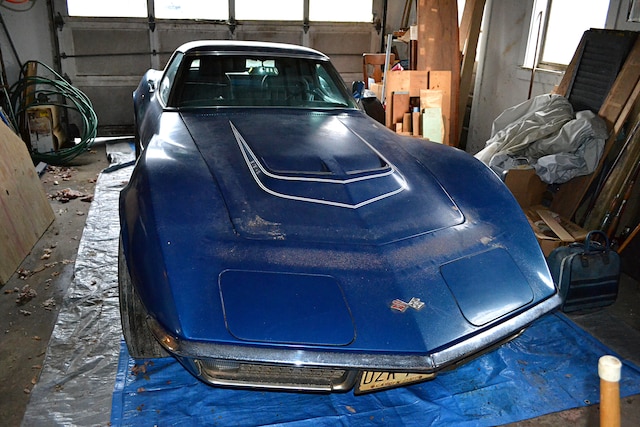 Some “buried treasure” Corvettes escape prying eyes. Nobody finds them, or if they do the owner refuses to sell. That’s what happened with this 1971 Vette, an original LT-1 convertible bought new by Fred Allen, a Brookdale Community College automotive technology teacher for 43 years and “an avid reader of Vette.”

How many old Corvettes such as Allen’s LT-1 convertible are still in the hands of their original owners, hidden away in garages across the country?

The year was 1984 when Fred Allen last drove his 1971 Corvette that he ordered brand new in March 1971 from McCarthy Chevrolet in Atlantic Highlands, New Jersey.

Original Corvettes have become a big deal in the hobby. Allen found this out recently when he contacted the NCRS. “They recommended that I just make it roadworthy, keep all the old parts, and it would become what they call a Benchmark for other restorations.”

“I took delivery in April 1971, when I was honorably discharged from the military. I still have all the ordering paperwork from McCarthy Chevrolet in New Jersey,” Allen wrote in his email.

We called up Fred for more information. Why does an original owner park a Corvette in his garage and quit driving such a hot car? Several months or so of non-use is understandable, but 33 years?

“I knew that I would never probably be able to have another one, so I just hung onto it.”

It was 48 years ago. Allen was fresh out of college and renting an apartment on a farm in East Chesterfield, New Jersey, the address on his Corvette order form. Making those payments on a new Vette was a “struggle.”

Much less of a struggle was a 45-minute drive to Long Beach Island, an 18-mile strip of beach that Allen recalled as “a sand dune” with “bay on to the west and ocean to the east.”

“Of course, I was a surfer. I used to hang out at Ron Jon Surf Shop; right there at the end of what they called the Causeway in Ship Bottom, New Jersey. The Beach Boys were singing their songs, and this car fit right in. That’s when I had the side exhausts. My parents had a house there on 8th St. in Surf City. One of my friends lived on 19th and he said he could hear me crank up the Vette because the side exhausts were so loud.”

In 2013, Allen retired and bought a farm with a three-bay shop in Maine. As he had done for the previous 42 years, he brought the Corvette with him. His intention all along had been to “restore” his Bridgehampton Blue LT-1, until the NCRS advised him to keep the car original.

“I am actually getting fired up about starting work to get it roadworthy again and do a little driving. There’s a car show coming up in Maine at the Union Fairgrounds around the end of this month. I might just load that car up on the trailer even though it doesn’t run yet and drive down there and show it right on the trailer.”

Per Allen, “The left cylinder head was replaced at about 13,000 miles due to defective valvesprings. I have the original head.” Allen said even the radiator hoses are original. The 350 will be cleaned, but remain unrestored.

Fred Allen ordered his LT-1 with both tops. The paint on the hardtop and body is the original Bridgehampton Blue.

Memories come rushing from back when Fred Allen looks at an old photo of the LT-1 from that amazing summer of 1971.

The interior is dirty, but in 1996 Allen and the three boys in his family cleaned the car up and found “not a slit or a crack in any of the vinyl on the dash or the door panels” and “seats in good shape.”

The only “power” is power steering. Allen purposely left off other power-robbing accessories, including air conditioning, for the sake of performance.