The First at Last: Briggs Cunningham’s Number 2, one of the first four Corvettes to race at Le Mans 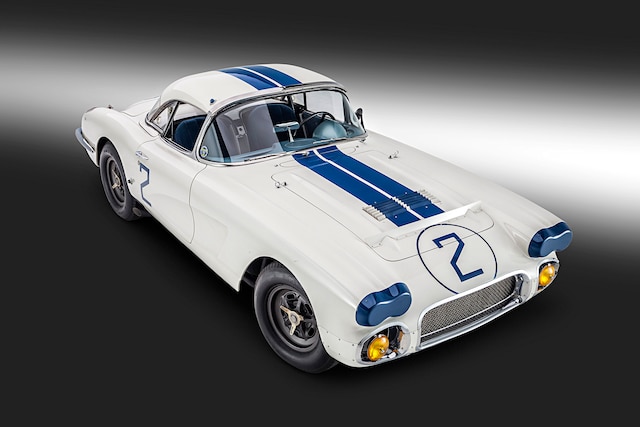 Losers hardly ever go down in history. At least go down in a good way.

But for every rule there’s an exception. To the best of our knowledge, this Ermine White 1960 Corvette was never first across any finish line. Yet it’s one of the most renowned Corvettes in racing history.

It’s because it was one of four across another line: the starting line at Le Mans in 1960, the first year Corvette competed at the 24-hour endurance race. Specifically, Number 2 was one of three campaigned by sports car impresario Briggs Cunningham.

Winning Le Mans was actually a means to a greater goal. Though ravaged by war, Europe sprang back with the most highly regarded sports cars of the time. The Ferraris and Talbot Lagos and even Jaguars would run off and hide from anything produced on American shores. Briggs sought to change that first in 1950 with not one but two Cadillacs, one re-bodied to resemble a blunted wing. They didn’t win but they went into the record books at 10th and 11th place, and into the hearts of the French fans who admired the team for its pluck.

The following year Briggs went on to establish a car manufacturing company that bore his name, Cunningham. (Incidentally, he referred to the models as C2, C3, C4 and C5 well before Corvette even existed.) Anyway, the prevailing objective was still a win at Le Mans under Yankee power (Chrysler Hemi at the time). But the gods never smiled on Briggs’ team. The best it did was fourth overall, which is respectable. But fourth is three off of first. For tax reasons, Briggs ceased car production in 1956. From then on he raced other makes, finding considerable success in Jaguars.

In fact, so successful was Cunningham’s Jag deal that he reportedly caught the attention of GM engineer Zora Arkus-Duntov. Zora constantly sought opportunities to put his baby in the spotlight. In 1956, he and Corvette race program manager Frank Burrell sweet-talked GM into going to Le Mans with the Corvette. This despite hand-wringing by GM President Harlow Curtice, who sought to drive GM out of motorsports after Mercedes’ crash at Le Mans the year prior. Ultimately, GM scrapped the Le Mans program at the last minute.

Zora never quit. As word has it, in 1959, he (and presumably Frank Burrell) pillow-talked Briggs into giving Yankee power another shot at Le Mans. He sweetened the pot with the prospect of house-prepped engines and other goodies. Briggs obliged and bought three 1960 models from Don Allen Chevrolet, each optioned to the hilt: fuel-injection, sintered-metallic brake linings, quick-ratio steering, close-ratio four-speed transmission, and limited-slip gear carriers. The damage: $11,730.24 for three dream-option first-gen Corvettes (that’s $95,646.24 in today’s funds, which would still be a deal for a one fuelie car!).

Briggs had his chief mechanic and fellow Jaguar dealer Alfred Momo prep the cars. That included multiple redundant fuel pumps, a bespoke 37-gallon fuel tank (the largest that the FIA allowed), seats from a Douglas C-47 Skytrain and stiffer springs.

Briggs and Alfred shook down this car, No. 2, and another at Sebring in March. The car, driven by Dr. Dick Thompson (“The Flying Dentist”) and Fred Windridge suffered an engine failure on lap 41. Briggs, Bob Grossman and John Fitch later ran the car hard at Bridgehampton to reveal weak points. They found few. Satisfied, Briggs sent the cars to France.

Le Mans lined up cars by displacement, giving the Cunningham Corvettes the first three positions. Briggs Cunningham and Jim Kimberly drove the No. 1 car. Dick Thompson and Fred Windridge drove this one. John Fitch and Bob Grossman drove the No. 3 car.

Soon after taking over the wheel from Briggs, Jim Kimberly rolled the No. 1 car. While No. 2, this car, struck a sandbank and underwent repairs to its right-front fender that put it well back of the pack. It lasted to nearly the end of the race when the engine finally gave up. Despite chronic overheating in the latter part of the race, No. 3 won its class, the first win for Corvette at Le Mans. But it came in at a disappointing eighth overall.

Disenchanted with the finish, Briggs scrapped the entire Corvette program. He returned the engines to Chevrolet and had Bill Frick dispose of the cars. No. 2 went to a National Zinc employee in New Jersey according to racer and auto journalist Steve Smith.

We know this because Steve bought the car from the National Zinc employee for $3,800. A racing enthusiast himself, Steve wrote that he took the car to Thompson Raceway for a flogging. According to him, the session revealed near-worthless brakes, later discovered to be brake linings worn straight through. Blissfully ignorant of it, Smith drove the car that way from New York to his new job at Road & Track magazine in California. Imagine driving a car cross-country on flat-bottomed DC-3 seats and bald tires (the same tires from the Le Mans trip). Understandably, he dubbed the car Beastie.

Steve drove Beastie, almost always hard, until the stock engine blew up. Within the year, Smith returned east, this time to Connecticut. The purchase of a Porsche Speedster inspired the sale of the Corvette. An ad in the Road & Track classifieds produced no takers.

To make the car more presentable, Steve wrote that he had Earl Scheib paint it Royal Blue. Ultimately, Steve gave the car to Vasek Polak, a Manhattan Beach, California, Porsche dealer, in trade for race-prep on the Speedster. Vasek reportedly cast the car to his yard of forlorn racers. Steve says he largely forgot about it.

Then, sometime in the early 1980s, the Road & Track ad Steve took out in the 1960s finally produced a lead. It was Corvette historian and restorer Mike Pillsbury. “Pillsbury traded in Corvette parts,” says collector Bruce Meyer. As Steve Smith remembers it, in June 1980, Mike heard about a junkyard in Irwindale, California, slated for closure. Mike has since departed for the great workshop in the sky so we have to rely on secondhand accounts of what happened.

“He suspected it was one of the Cunningham Vettes,” Bruce says. He explains that, as Mike sanded it down he discovered that it was white with a blue stripe. “So he went over to Cunningham’s museum in Costa Mesa (California) as they had all the numbers of the cars. Then they reached out to Frank Burrell. Frank had all the stuff still in his garage; the dash with the scrutineering information, the seats and so on.” Mike then restored the car. “(He) did the most spectacular job putting it back together,” Bruce adds. “He gets all the credit for that.” (The Cunningham museum that once stood in Costa Mesa was literally down the street from the Vette offices and where this editor spent many an hour just dreaming about all of these famous cars. B.B.)

Then No. 2 debuted at the 1987 Monterey Historic Automobile Races. According to Steve Smith, Mike’s widow sold the car to an East Coast restauranteur upon Mike’s death in the late ’90s. Bruce’s friend Lance Miller helped track down the car for Bruce, who bought it in the late ’90s. In 2001, Bruce took the car to the Goodwood Festival of Speed. “I wanted a racing Corvette, specifically one that raced at Le Mans,” Bruce explains. “Also, I wanted one that had knock-off wheels that didn’t look like a street Corvette. So that ticked all the boxes, and I love the Briggs Cunningham story.”

Briggs Cunningham’s No. 2 still sees track time. Earlier this year he ran the car through its paces at The Thermal Club, a racetrack outside Palm Springs, California. Though given its provenance it really doesn’t have to win to prove anything. Bruce also street-drives the car, especially to events. In 2016, at the San Marino Motoring Classic, the Historical Vehicle Association bestowed upon the car its highest honor, its Preservation Award that recognizes a vehicle’s authenticity and intactness. In 2008, it won the Corvette class at the Pebble Beach Concours d’Elegance.

Although No. 2 may not have been a winner on the track, ever, it’s far from a loser. You’d be hard-pressed to find a more significant Corvette race car than this one.