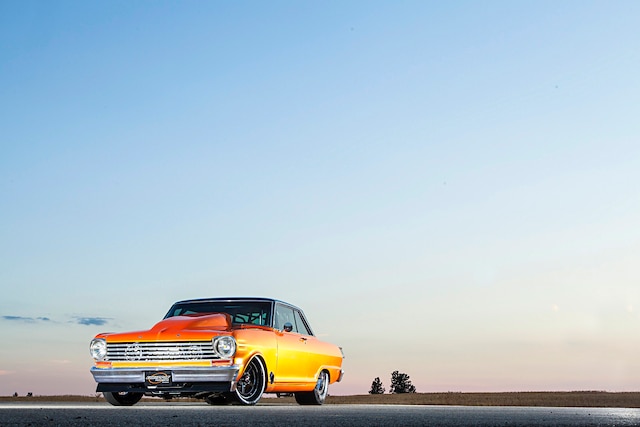 Psychologists maintain that humans favor the known. The Familiarity Principle explains why we prefer the things we like. Sometimes all it takes is mere exposure. For example, there’s a high probability that you owe your affinity for the Chevrolet brand to a friend or a family member who had one, or a kid who had a cool one in the high school parking lot.

Eddy Whipple may build cars for a living (Whipple Motorsports Speed & Custom, Spokane, Washington) but that’s probably because of drag racing. “Typical guy, I snuck my car out when I was 16,” he begins. “My parents didn’t know that I went to the high-school drags. That was the needle in the arm right there.”

And all was well, at least until he took it to the Street Car Super Nationals. “That’s what gave me the bug to build a Nova,” he recalls.

He says he wanted his to actually be … a Nova. “I like things like the firewall and headliner,” he points out. “The Blazer, it was just a shell with a dash in it, nothing else Blazer was on it.”

In case you haven’t heard, there’s a class for that: 275 Drag Radial. As the name suggests, cars are limited to a 275mm-wide radial, but there’s more to it. “In this class if your car came with leaf springs, it must have leaf springs,” he says. “You can modify the springs and where they mount but you have to keep things like the inner wall of the original frame. I like that sort of thing.”

He started by building a thin-wall 4130 ’cage to SFI spec 25.3B (6.50 e.t.). “We cut off the roof to do the top bars,” Eddy says. Once the fabrication was finished, Eddy sent the body and still-severed top for gloss black and gray powder. “We had C&B do the headliner while the roof was off. Then we just welded it back on and completed the job.”

Tire-class rules allow front clips provided they bolt to the factory points. Eddy chose a front clip from Smith Racecraft. Naturally, the rear sits on leaf springs. “But there’s way more to it than just leaf springs,” Eddy admits. “When we went down to Las Vegas for the big races, Menscer and Leaf Spring Nation, they couldn’t have helped any more than they did. There’s soooo much homework in just the springs and shocks.”

The drivetrain starts with an iron Chevrolet Performance Bowtie Sportsman block. It displaces 435 cubic inches with a 4.000-inch Callies crank and 4.165-inch CP pistons. “Man, that’s a good company to work with,” Eddy praises. “Them and Carrillo (who made the 5.850-inch H-beam rods).”

The pistons’ light D-shaped dish, when combined with Dart 18-degree heads (built by Horsepower Research and Development in Coeur d’Alene, Idaho), yields a 10.0:1 static compression ratio. The heads have a combination of stainless and titanium valves.

A Lil John’s Motorsport cam initiates the valve sequences. “I just told them what I had and they came up with a grind for this engine,” he says to avoid giving specs. It uses Jesel offset roller tappets and offset 1.7:1 rockers to work with the heads.

Eddy built a set of 2 1/8-inch stainless headers. They mount Turbosmart wastegates and feed Comp Turbo CT5X billet 3BB turbochargers. They in turn feed a 90-degree Accufab throttle body by way of a Chiseled Performance air-to-water intercooler in the back seat area. A two-piece Bowtie manifold distributes air; a Holley ECU directs fuel. “Ernie Mena at EPC Racing helped a lot with tuning,” Eddy praises. And the results are real: under 20 psi boost it made 1,480 hp at the wheels. “And that’s a very conservative tune,” Eddy says. “The turbos have the capability to make as much as 44 pounds of boost.”

Marty Stromberger built the TH400 that it feeds. That, in turn, spins a 3.70:1 gear on a spool in a Strange Ultra Case mounted to a fabricated Moser 9-inch housing. That spool drives 40-spline axles.

Mike Gortsema reassembled the body and fit a VFN fiberglass front clip and trunk lid (Eddy made the trunk splitter). AJ Parker and Tom Mertens at Professional Finishes came up with the PPG-formulated color combination. Watson’s Auto Body in Spokane “plated” the bumpers in spray chrome. “It was a mother effer to do the grille, headlights, and other stock crap on a stock fiberglass front end,” Eddy admits. “But it’s totally worth it. The car still looks like a Nova.”

With restoration-grade door panels and carpet by C&B, the interior is downright luxurious for a race car. Even the Kirkey seat is a little more comfortable thanks to C&B’s bespoke cover. A Holley dash ties into the ECU and a Precision Products shifter ties Eddy to the gearbox. The trunk mounts a big tank split in two, one side for the fuel and the other is a reservoir for the Chiseled intercooler.

“My brother AJ, who also works with me, takes a lot of pride and ownership in the car, too, especially on track day,” Eddy gushes. “He seems to run the show at the track. It’s not often that I go racing without AJ.” Their dad, Gordie, pitches in regularly. “I think he enjoys the races more than us,” Eddy says. An open-wheel racer from the ’60s and ’70s, I’m sure he digs the races a lot more now that he’s not the one footing the bill.

The duo isn’t entirely impressed with the 8.16 at 177 (the records at press time are in the low 7s at 200-plus). But they’re not upset either. “I mean, we have to step it up a little bit so at least we’re competitive, but we’re in this for the fun,” he says. “We’re not interested in any records.”

So what really interests him? Well, Eddy rattles off some fancy sounding bull about it being a good display for his business and all. But then he gets real. “Probably my favorite part about the car and the competition is the quality of people it allows me to meet and deal with,” he says. “There are competitors out there that will do anything to help you or your car get sorted out, or go faster, or just make it to the track. Even if it’s somebody who you’re racing against, there are still people in this sport who want to see everybody do well and have a good time. It’s pretty cool.”

So I guess you could say Eddy, AJ, and Gordie like racing because it’s familiar. You know, as in one big family.

» Read More
Get bigger tires under the back of your early Chevy II or Nova!