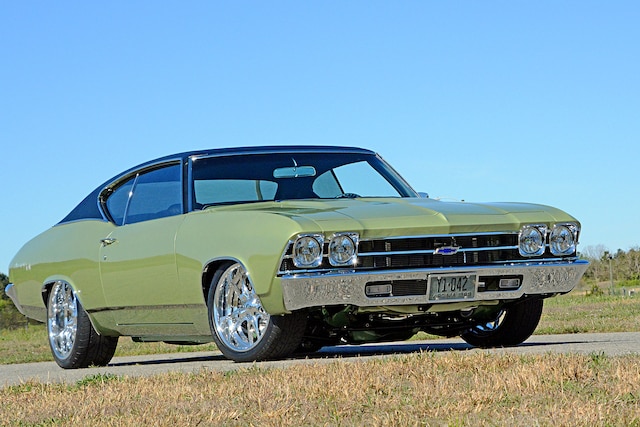 When The Beatles released the song “Come Together” off their Abbey Road album, it spent weeks on the Top 40 before eventually hitting No. 1. In the case of Gary Houchins, however, coming together was a challenge that resulted in this 1969 Malibu that’s off the charts.

“I had a 1968 Chevelle in high school, but it was a six-cylinder. I wouldn’t open the hood for anybody,” Houchins laughed. “In later years, I did a 1965 Malibu SS, which was the first car I ever built. I was itching to do another project so I looked at a lot of ’68s, but didn’t really find anything.”

“I knew about this ’69 that was behind a concrete plant that was owned by a friend of my dad’s,” he continued. “I went to see it and got it for $1,000. It was rusty, but pretty much all there. So I took my tractor over there to pull it out of the woods and put it on a rollback—and actually could have sold it for a profit before I even got home!”

Of course, visions are often replaced by revisions, so after it was home and torn apart, his plans for what he wanted to do with the car changed. Danny Roddenberry, Joe Schelin, and Donnie Bostic are friends that all helped Houchins think through some ideas while helping him wrench on the car as it came back together.

Over the course of four years, a lot of detail went into this A-body. The frame was stripped and had the welds smoothed out before a new base and clearcoat was applied. Parts were literally coming in from all parts of the country as Classic Performance Products in Placentia, California, was called on for the 2-inch drop spindles and four-wheel disc brake kit while UMI Performance in Philipsburg, Pennsylvania, supplied the upper/lower A-arms and front sway bar. Pro Coil shocks from QA1 Precision Products in Lakeville, Minnesota, were used on the front of this Chevelle while Detroit Speed, Inc. from Mooresville, North Carolina, provided the adjustable coilovers on the rear.

Topside, a lot of attention was being lavished on the body. All of the seams were filled and smoothed on the hood, trunk, doors, and jambs. Relocating the wiper motor inside the cowl after the firewall was reformed and smoothed cleaned up the engine bay. Sheetmetal panels were fabricated to cover the inner fenders while enclosing the radiator and front valance.

All of the marker lights and emblems were shaved while the rest of the body was lovingly prepped for painting. Bruce Kennedy of B&K Customs in Dinwiddie, Virginia, finished the bodywork and then expertly sprayed the car in PPG Forest Green—which led to a PPG Paint Pick award at the 3rd Annual Goodguys Carolina Nationals. The ridges on the lower portions of the car were tinted a darker shade to help accentuate the body lines. Royal Silver of Norfolk, Virginia, and Hanlon Plating of Richmond, Virginia, did the chrome work while T&T Powder Coating of Yorktown, Virginia, added their expertise powdercoating parts.

Sitting in the engine bay is a highly detailed stock 1999 LS1 that Quality Machine Shop in Dinwiddie, Virginia, put together for the car. Subtle mods such as a chromed Weiand low-rise intake (PN 300-111P) and polished heads helps provide crisp throttle response up to 6,500 rpm while the stock throttle body is covered by a Street & Performance filter kit. Super Comp long-tube headers deposit the exhaust gases into a Pypes 2.5-inch exhaust with Street Pro mufflers. A baffled Holley oil pan provides 5.5-quarts of synthetic lubrication. EFI Performance in Henrico, Virginia, reprogrammed the stock computer for enhanced performance and driveability.

Inside, the stock ’69 seats were redone with new seat foam. A second set of bucket seats were incorporated in the rear seating area with everything being re-covered in a combination of black leather and suede by Stingray’s Upholstery in Prince George, Virginia. Dakota Digital VHX instrumentation, a Billet Specialties steering wheel, and a Pioneer head unit complete the interior.

Getting the right parts ’n’ pieces takes a considerable amount of time and patience for any customer car project, but when it all comes together it’s good. With the awards and attention this car has received, we expect that feeling will last a long time.