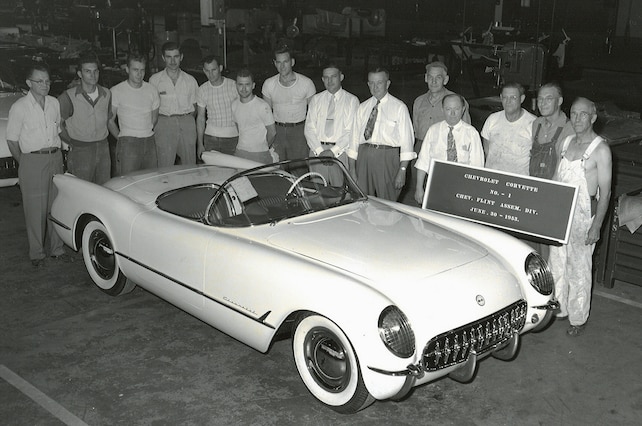 George McGriff is standing next to a 1953 Corvette (#262) at the National Corvette Museum in 2014. George is one of the few original members of the 1953 Corvette assembly team. Photo: Walt Thurn

The Chevrolet Corvette was developed in secret under the code name “Project Opel” in late 1952 and early 1953. George McGriff worked at GM for 30 years until he retired in 1980. One of his more unusual jobs was working on the team that built the first 300 Corvettes. They were created in Flint, Michigan, and assigned a secret project code called Opel. Each one was built by hand in an out-of-the-way brick customer delivery garage. There were three teams of eight people that constructed them, and George was on one of those teams. He recalls having to know the entire assembly process in case someone was sick. Normally, his job was the final inspection of each Corvette before it was released for dealer delivery. He remembers when a part broke during the build process there were no suppliers to replace a missing or broken part. The team had to improvise and build the replacement by hand. It was called “on the fly” engineering. They were using a new material called fiberglass. When the strength of fiberglass was questioned George offered to throw his bowling balls into the panels to see how strong they were. His idea was accepted and fortunately the panels did not fail when tested using his high-tech procedure.

The first three 1953 Corvettes rolled off of the Flint assembly line on Tuesday, June 30, 1953. The third Corvette in this trio was VIN E53F001003 or “003” and it was sent to the General Motors Engineering Staff in Warren, Michigan, for testing. It was delivered to engineering on July 7, 1953, with 67 miles on the odometer. While at the tech center, the #003 Corvette underwent a series of grueling tests. This included a five-hour -20 F shake test at the Harrison Radiator Division Cold Room in Lockport, New York, on July 8-9, 1953. Shortly afterward it underwent a 5,000-mile Belgium Blocks test to check its chassis strength. Per Chevrolet Engineering Department Work Order #19013-27, issued August 20, 1953, the engineers at the tech center completely rebuilt #003 into a new car, including the replacement of the frame. It is hypothesized that after testing the original body for #003 was put on one of the Corvettes campaigned in NASCAR. The frame remained in Warren.

Viewed from the right side of Corvette Repair’s Cutaway Corvette the body detail is complete down to the original “dome” hubcaps. These were installed on the first 26 Corvettes produced. If you look at it at the right angle it looks like a complete car.

This is the view from the driver’s side and it is a startling contrast. Every part that makes the Corvette function is visible in this photo.

The view from the left rear side of the Corvette shows how the fuel tank, spare tire storage and individual chrome pieces are held on to the body. It’s a remarkable achievement.

How it was discovered

The story of how chassis #003 was found began in the summer of 1977. Phil Havens, an attorney with the office of the Michigan Attorney General, purchased a 1955 Corvette. That autumn Mr. Havens removed the body from his 1955 Corvette and discovered that the chassis bore the serial number E53F001003 in two locations. Havens decided to install a correct 1955 chassis under his Corvette he was restoring. He also restored the bare chassis VIN: E53F001003 and kept it as a static display. The static fame was first displayed at the NCRS Cypress Gardens Winter meet in 1982. In 2012, Havens advertised the #003 frame on eBay and Kevin Mackay, owner of Corvette Repair in Valley Stream, New York, spotted it.

He discussed his find with Ed Foss, owner of the Foss Collection in Roanoke, Indiana, and Ed purchased the chassis. Ed commissioned Corvette Repair to resurrect the frame and turn it into a unique, driveable chassis with a cutaway 1953 Corvette body on the passenger side and exposing all of the running components, including the engine, dash, see-through floor with seat and open trunk on the driver’s side. It was completed over several years by Mackay and his team. While not roadworthy, Mackay can start the engine, engage the Powerglide transmission into drive or reverse, apply the brakes and slowly move this unique Corvette under its own power around a display area. Mackay notes “this cutaway stirs the passion people have for 1953 Corvette history. Its purpose is to educate enthusiasts by allowing them to closely inspect the mechanical aspects of the very first Corvettes by these assembly teams 65 years ago. This driveable chassis provides a detailed snapshot of these early efforts.” People like George McGriff started this Corvette legacy and Kevin Mackay brought it back to life!

Photography by the Author, Bill Erdman and GM Archives