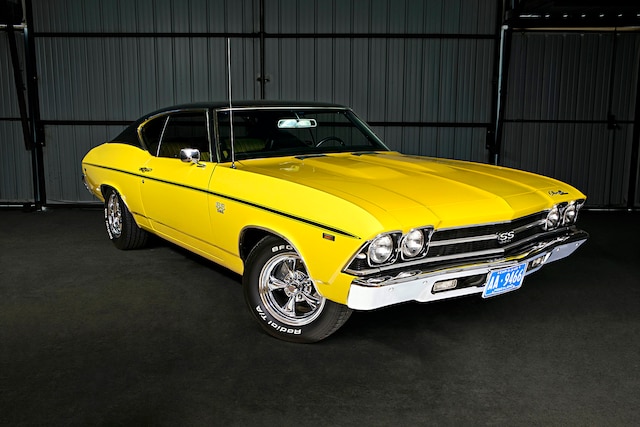 If you set foot in a Chevrolet dealership in 1962 and ordered an Impala SS with a 409 and a four-speed, it’s probably a safe bet that you knew exactly what you were buying, and what you were getting into with that decision. That is precisely what Jerry McLean did when he walked into A.D. Anderson Chevrolet in Baltimore, Maryland, to purchase a daily driver. At the ripe age of 20, he bought an example of what is arguably today considered the zenith of the fullsize factory hot rod/muscle car. He was also, at that time, buying into something else—the institution of marriage. As most seasoned car guys will tell you, that’s a decision that usually doesn’t go too well with impractical cars. While he never sealed the deal with the nuptials, its impact was felt. As a result, the Impala lasted in his hands for less than two years. After it was sent to a new home, Jerry slowly drifted into the obscurity of the four-door family sedan.

He eventually did get married, but with a family and work to deal with over the years, cars were placed on the back burner for a few decades. It wasn’t until 2010 that he decided to once again get back in the saddle and look for a car to play with. His buddy Tom Rapanotti, who was heavily involved in the car hobby, fueled that urge. When his search began the criteria quite simple. He notes, “I just wanted to have a hot rod four-speed car that I could drive and show. I was interested in either a Camaro or a Chevelle, but the Camaro was a little small for me.”

His quest began by relying on the usual resources. Newspapers and online searches were his starting point, which eventually pointed him to Mecum’s website. The Chevelle SS that you see was scheduled to cross the block at their Indianapolis auction in spring 2010. He was hot for this car so he spent an entire week in Indy trying to reel it in. The backstory on it was that it was advertised as a low-mileage, numbers-matching real Daytona Yellow SS396 with a Turbo 400 and a bench seat. It had been sitting since 1995 and was being sold by the son of the original owner. According to Jerry, the body was in exceptionally good condition. He points out, “I went around the whole car with a magnet and there was no plastic.” Also in what appeared to be in as-new condition was the vinyl top, which he was told had been replaced prior to the car being parked. While the exterior was remarkably solid, the interior had deteriorated from sitting. Mechanically, the engine ran but it was a big question mark. At the drop of the hammer, he was the high bidder on the Chevelle. “The day after winning the bid on the car, I drove it home to Baltimore,” he exclaims. “I’m happy to say that it made the 600-mile trip without a hitch.”

After that voyage, there was very little time spent enjoying it. Within days, Jerry wheeled the car into Tom’s garage and they both tore it down to a bare shell. Since he wasn’t planning on having it dipped or mediablasted, it was chemically stripped and then sent off to Warner Auto Body in Baltimore, Maryland. The shop went over the entire body and did all the necessary bodywork, which culminated with a fresh coat of PPG Daytona Yellow basecoat/clearcoat applied by painter Jeff Warner.

With the body wrapped up, his focus turned to what would lie under the hood. He had decided at the beginning of the project that he wanted the car to be equipped with a four-speed and also have more power than the stock 396 was cranking out. That feat was accomplished with the block being punched out to 407 cubic inches and the installation of all-new internals, which included a GM crankshaft and a set 10.25:1 Speed Pro pistons. At the top he added a set of Pro Comp aluminum cylinder heads and an Edelbrock Performer RPM manifold capped with a Holley Quick Fuel SS series 750-cfm carburetor to disperse the air/fuel mixture. The expulsion of gases is handled by a set of Hedman headers running back to a pair of MagnaFlow mufflers via stainless steel pipes. The reassembly of the engine was a job that Jerry tackled himself. The conversion to the M21 four-speed was also taking place at this point. After an exhaustive search for the right unit, one was found in Georgia that had been freshly rebuilt and came with all the peripheral hardware needed to make it a plug-and-play operation. At the back, the 12-bolt Posi rear was upgraded with the installation of a 3.73:1 Detroit Locker differential.

To elevate the Chevelle’s ride and handling to contemporary standards, he rebuilt the suspension and installed KYB shocks at all four corners. He also added a Hellwig 1.25-inch sway bar up front and a 1.125-inch bar at the back. Braking upgrades consisted of SSBC aluminum calipers along with 11-inch rotors at the front and a pair of The Right Stuff calipers with 10-inch rotors at the rear. BFGoodrich T/A radial tires wrapped around American Racing Torq-Thrust II wheels make it all stick to the pavement.

As progress was made and the car came back together to the point it was driveable, it was sent off to North Point Glass & Trim in Baltimore, Maryland, for the final installment in its transformation. Since there was little to salvage of the original interior, they began by cracking open the Parts Unlimited catalog and ordering a set of their pre-assembled bucket seats to replace the old bench seat and new door panels. The dash assembly, all the wiring, and the carpet were also replaced. The black and yellow exterior theme was carried over to the inside with the addition of yellow houndstooth inserts, along with the installation of a new console.

The entire rebuild of the Chevelle took about 16 months, and as soon as it was wrapped up, Jerry hit the open road with the car. “I truly enjoy driving this car every time I take it out of the garage,” he notes. That enjoyment has been kicked up a few notches since it was completed with a gearbox swap and suspension upgrades. The M21 was replaced with a TREMEC TKO 600 five-speed, while QA1 springs and adjustable shocks now reside up front, along with Hotchkis springs and QA1 shocks at the rear. This gave the Chevelle a 1-inch drop that greatly improved ride and handling quality. As for future plans, Jerry only hints that if he had to change anything, it would probably be to install a 502ci big-block, which would further enhance the enjoyment curve.