It’s All About The Throttle: Old-school project with a heavy street race vibe 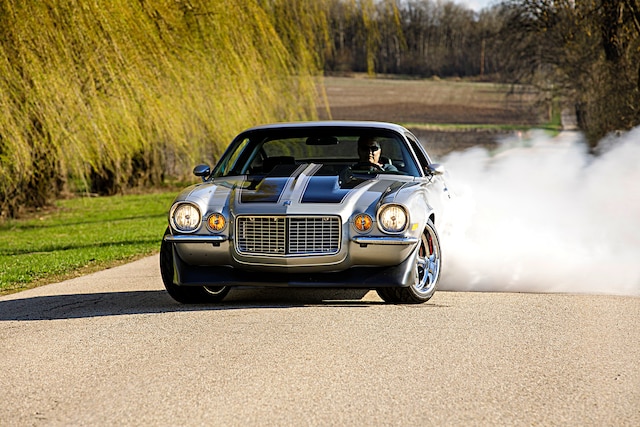 The sure thing about a project build is that you inevitably learn something about yourself. No matter how versed you think you are, you find out that some people know a lot more than you. You learn humility. You learn how to stage the construction. You learn that your family is more important than your stupid car. And along the way, you establish relationships that last long after the business has come complete. Maybe if you’re lucky, maybe you find someone like Randy Johnson along the way.

Lance Luchini’s dad raced a 1957 Chevy on ovals, dirt bullrings. When he was a little boy, he held the rollbar sections while his dad tack-welded them in place. He always loved being around the race car. So what were family man Lance’s car-building criteria? What was his story? What was his desire? It turns out just one simple thing: he always loved the lines of the second-generation Camaro, an old-school muscle car. When did he move from contemplation to actually engaging the gears?

“It started a few years ago,” he said. “My boys and I were talking about muscle cars. It was time. I started looking for one online. I picked it up in Tennessee. It was a shell and had no interior, but the main thing was that the body didn’t have a spot of rust on it.” And you all know that’s the best place to begin to save time and money.

“I decided to build some old-school horsepower,” he said. “A naturally aspirated big-block simple and plain under the hood, but also modern steering, suspension, and brakes.” So the Old-School Project (OSP) began. “I ordered and installed a DSE subframe, mini-tub kit and frame connectors, differential, and a rollbar. After a lot of fun and many late nights, the powerplant was next. I purchased a Shafiroff Big Dawg 582 and a Turbo 400 transmission from Monster.

“During that period, we were starting a family business and as it grew, so did the demands. The OSP was beginning to go on the back burner. I installed the engine but knew that if I didn’t do anything about all the other demands, the project wouldn’t get completed.”

One night, he was reading Chevy High Performance magazine. The story was about a car built by Randy Johnson at D&Z Customs in West Bend, Wisconsin, conveniently located 45 minutes from Lance’s home (Cue lightning bolt). He was impressed with the work, at least as much as he could tell from images in the magazine, but he knew he’d have to see for himself. He called Randy, who requested photos or a video of the car.

“Randy picked up the Camaro … and nine months later,” he cooed, “D&Z gave it back. It was awesome.” Lance had lots of inside encouragement and help from his wife, Jeanne, and sons Jacob, Joshua, and Jeremy. On the outside, it came from A-1 Radiator and from Automotive Repair.

Although Randy did most of the mechanical work, after Lance had installed the front suspension and the engine, Lance cranked it up again and built the four-point rollbar to which he anchored Simpson four-point belts. But aside from the Classic Dash insert, the Auto Meter Pro-Comp dials, the Flaming River steering wheel, and the small diamond-plate patch behind the shifter, the look of the interior is blissfully original, mimicking the same modifications that would likely have been made back in the day. During the interior treatment, D&Z installed new wiring as well as the audio components. Randy Johnson and company completed the bodywork and applied the Cortez Silver. Before they gave it back to Lance, they set up the chassis to take full advantage of those bulbous no-tread Nitto drag slicks.

Somehow we don’t see Lance pussy-pedaling the OSP Camaro or driving it to the grocer’s or taking the whole family out for a ride (but only because they couldn’t all fit inside). It comes off way too jagged for that. We suspect Lance has a slightly nefarious bent. He can’t think of a better way to blow all the cares and problems of the hour straight into next week as directed by the thunder that big-inch Shafiroff makes. Now we’re not saying that Lance is a street fighter; the best street fights are always the ones that don’t happen. The Camaro’s stance and big back tires would make you think twice about challenging him.

Lance’s words of wisdom: he said that the most difficult part of the ordeal was finding the time to complete the build … and that having a set schedule and sticking to it proved to be the most efficient way to manage his time.

The gravy, the payoff, came a little bit later. “On Father’s Day 2016, my sons and I entered the Camaro in a local show, the first one ever. There were about 300 cars there and the Camaro won First place in the Custom Build category. It was special to have my sons there with me.” Yeah, Dad, way to go!

Then he revved the engine, annihilated the Nittos … and was gone.