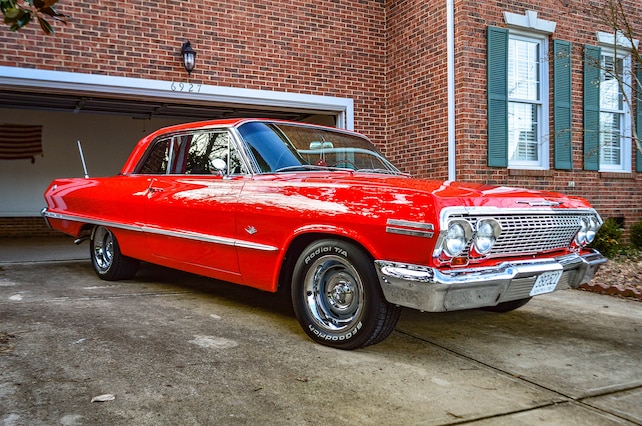 Tim Brown’s 1963 Chevy Impala SS has been in the family since it rolled off the showroom floor decades ago. His grandfather purchased the 327 Turbo-Fire, four-speed, on March 7, 1963, and held onto the car until he passed away in 1979. Then Tim’s mother used the car as her daily driver for a few years before the car was parked in the backyard. Finally, in 2005, Tim restored the Impala to its former glory and now takes meticulous care of it to this day.

This Marina Blue 1972 Nova is the product of years and years of tinkering by Brian Dacey. He purchased the Nova back in 1988 for a meager $180 and has since modified it to be just the way he wants it. And the way he wants it is with a 355ci small-block bolted to a TH350 transmission and 12-bolt rearend with a 3.73:1 rear gear. With a little help from an NOS Powershot, the Nova has made a best run of 11.40 at 116 down the quarter-mile.

Emphasizing his car’s inherent strengths, Keith Greene turned his 1978 Camaro RS into a stylish corner-carving beast. To get from stock to where it is today, he upgraded the Camaro’s front suspension with QA1 coilovers and upper and lower control arms and a Hotchkis sway bar. In the rear lives QA1 shocks and 2-inch-drop leaf springs. A 350ci small-block and four-speed give the car ample acceleration while a Wilwood front and The Right Stuff rear disc brake combination bring the car down from speed. Pro Car seats by SCAT, Simpson five-point harnesses, and 18x8 Riddler wheels wrap up his list of modifications.

Mark Morehouse wanted to build a station wagon that's not overlooked as a hot rod. Check out his 1963 Chevrolet Impala wagon that goes beyond the usual.

Scott Shafiroff Racing Engines puts their own twist on a 509 stroker crate motor build! Follow along with the highlights of this engine build!

This 1963 Chevy Impala SS was a restomod for the Greenhegen father & son team. They started collecting parts for it in 2009 and haven't looked back.

Check out the February 2014 Bow Tie briefs as we look at the latest Chevy news, facts and upcoming shows. See how the 2014 Z/28 Chevy Camaro spanks Porsche and Lamborghini, the upcoming Super Chevy shows for 2014, and classic Chevy's up for auction.

Check out the December 2013 edition of Bow Tie Briefs! We take a look at some interesting Chevys on sale, a rare 1962 Chevrolet Bel Air bubbletop, and new crate engines from Chevrolet Performance!

Back in the day in 1963, you ruled the roost if you owned a 409 Chevy. We're taking a look at 50 years in the rearview mirror at one of the finest engines that Chevy has ever built. It was so great in fact that it mopped the floor with the competition. Check it all out, in this month's Super Chevy!

Check out the November 2013 edition of Back In The Day! Donnie Shaffer is known as "The Crazy 409 Guy" for a reason. He has owned 95 409 W-motors along with over 50 different Chevrolets.