Second Chance: In 1996, Dennis Sneath missed an opportunity to buy a 1969 Camaro, but was lucky to get a second shot at it two years later 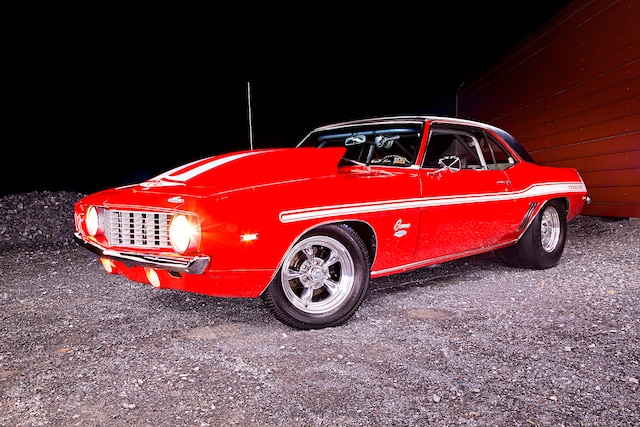 Is procrastination a bad thing? Most people will tell you that it is. However, some non-conformists extol its virtues and point out that it can often serve as a deterrent to impulsiveness. Any way you slice it, when it applies to automobiles it can be a double-edged sword. There are as many stories out there about the one that got away as there are about those who jumped at a car and got burned, which brings us to Dennis Sneath—or Denny as he likes to be called. Denny has a procrastination story to tell, and as you can probably guess it involves his Yenko-flavored Pro Street 1969 Camaro.

The origins of his Camaro story began in 1971, when he was still in high school. Denny’s teenage love affair with Chevrolet’s nascent F-body was raging to the point that he had to have one. It was an impulse that was eventually satisfied with the purchase of a ’67 Camaro RS/SS from a family member. It was powered by a warmed-over 350ci small-block. As weekend driver, it was perfect. The youthful desire to go fast was also raging so he decided that going fast was his new passion and the Camaro was the go-fast enabler. Looking back he recalls, “In 1972, I took it off the street and started racing it.”

With the ’67 sidelined from daily transportation, Denny had a real dilemma on his hands that could only be solved with—as you might guess—another Camaro. “I ended up buying a wrecked ’68 Camaro,” he notes. “I went to Carlisle and bought a huge amount of used parts for it and fixed it.” He went as far as buying a donor car for parts as well. The new daily driver only lasted a few months in his hands. Someone with a fat roll of cash made him an offer for the Camaro that was too sweet to pass up, so it went to a new home.

That chain of events had a profound impact on Denny’s life. He went on such a shopping spree for Camaro parts that once the car was gone the stash was huge. People started asking him for parts so he started buying wrecked Camaros and parting them out. Denny’s Camaro Parts, as a business, evolved from the need to fix a wrecked Camaro.

The ’67 was raced hard for about 10 years, and as the parts business grew the interest in the Camaro diminished. It wasn’t until the early ’90s that he started toying with the idea of taking the ’67 and turning it into a pro-engineered car to drive on the street. Coming home from the 1996 edition of SEMA, in a conversation with his buddy Dick Shelly, he told him what his plans were for the Camaro. His friend laid down some words of wisdom by telling him, “I’m going to talk to you like a father. Do not screw that car up! That Camaro is worth more and looks better as a nostalgia race car. Do not mess it up. Put it on the street the way it is.” What did come out of that conversation was that Dick had in his shop a ’69 Camaro project whose owner had run out of cash. Denny went to look at the car and in his opinion, “It didn’t speak to me. It wasn’t radical enough.” It was back-halved, tubbed, and had a Ford 9-inch rear installed. It was also partially painted in Viper Red, but not much else was done to it. The biggest issue was that he was looking for a vehicle that had a full Funny Car ’cage, something that he could drive on the street and also race, so he wanted to think on it.

This is where the part about procrastination came into play. After sitting on the fence for almost two months he decided that the Camaro was right for him. To his surprise when he called to buy the car the reply at the other end was, “It’s too late; it’s gone.” That bit of bad news was upsetting. As a result, it rekindled his interest in the ’67 to the point that he cast aside Dick’s sage advice and took the car to a shop for the work to commence. His plan was to have a tube-frame chassis installed as the foundation for his street/strip warrior. Two years and two shops later it was again parked due to lack of interest and frustration with unfulfilled work from the shops.

Coming full circle, the ’69 reappeared back on the radar screen two years later. Denny got another shot at it when his buddy told him that the car was again for sale. The owner had parked it in his garage and didn’t do anything to it. Not wanting to repeat his mistake, he asked Dick to snap it up for him.

In 2000, the car was shipped back to Dick’s shop, Shelly’s Auto Body in Walnutport, Pennsylvania, where it started its resurrection. Since it was already partially painted, keeping it Viper Red wasn’t a tough choice to make. What he did want was to set it apart from the Z/28-flavored cars everyone else was doing at the time. He had a soft spot for the first-generation Yenko so that, too, was an easy choice to make. As you can probably also guess, putting an F-body together wasn’t a problem for Denny. His business had grown to the point that he was also carrying restoration parts for Camaros. While the theme was Yenko in spirit, the propulsion was a deviation. Instead of a big-block, he had a potent 355ci small-block cranking out 625 horses built.

Way Cool Rod Shop in Lancaster, Pennsylvania, was hired to create and install a custom rollcage around an interior that consisted of a mix of stock and custom pieces. The vinyl and houndstooth seats looked factory stock while the SYC inserts covering the tubs were custom made. Other upgrades consisted of Auto Meter gauges and a Turbo Action Cheetah SCS shifter. The shop was also responsible for fabricating the custom rear housing. Not all the work was farmed out to shops. Denny wasn’t shy about diving in and doing some work on the car so he and his buddy Ron Forry tackled most of the interior installation with parts from his inventory.

It took almost a year to get the Camaro back on the road to the point that he was satisfied with it. That satisfaction didn’t last long. Within a few months of having the car at home the Ford 9-inch gave way to a custom-made rear housing with a Strange centersection and spool. Denny was fixated on flogging it at the track at some point and that was one of the scheduled upgrades to get it done. While some of these mechanical changes were planned, something unexpected happened along the way. He took the Camaro to a few shows and started walking away with Best in Show awards, to the point that he had a rethink on brutalizing the car at the dragstrip. For the next 15 years the car was used on the street and shown extensively. The temptation to give it a good flog was always there, and it was often indulged. After all those years of indulgence, the small-block eventually swallowed two intake valves and was retired.

Faced with finding a suitable replacement, one phone call to Shafiroff Racing solved that problem. Denny ordered up one of their 598 Twisted Ultra Street big-block Chevy offerings. They started with a Dart block and installed a Manley forged steel crank, SRP 10.95:1 pistons, Brodix Head Hunter aluminum heads and Big Mouth intake, and a Quick Fuel QFX series 4711 1,150-cfm carburetor. He threw some extra cash at it to include upgrades to handle nitrous. This combination is good for about 930 horses. Backing up this potent mix is a Proformance Racing Turbo 400. He also installed a set of Lemons Big Block Pro Touring Headers that channel the spent gases to a set of DynoMax 5-inch mufflers.

The upgrades weren’t confined to just the drivetrain. BMR Suspension tubular A-arms and QA1 adjustable shocks were added up front, and Aldan Eagle shocks with adjustable coilovers at the rear. The aggressive look of the Camaro was further enhanced with a set of Cooper Sportmaster GLT 165R15 radial tires at the front wrapping a set of 15x4 American Racing Torq Thrust wheels, while at the rear, 31x18.5-15 LT Hoosier Quick Time Pro D.O.T. tires engulf the 15x14 American Racing Torq Thrust wheels, while braking was upgraded courtesy of The Right Stuff single-piston calipers and 11-inch rotors at the front, and Aerospace dual-piston calipers with 12-inch rotors at the rear.

It took a tremendous amount of luck for Denny to get a second shot at the Camaro. He has taken it to the next level with the latest batch of upgrades, but there is one lingering question. Why is he procrastinating on taking it down the track?