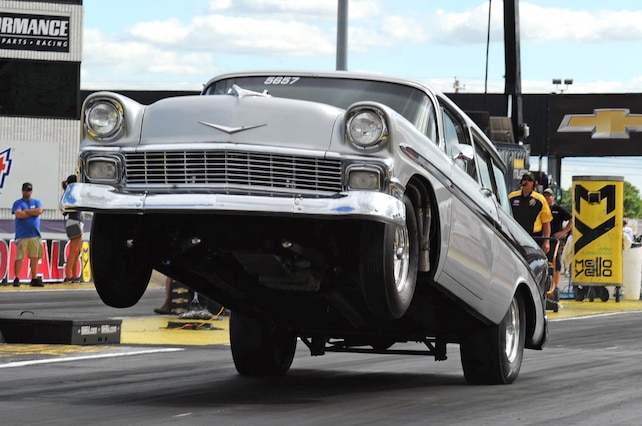 “People Magnet” Nomad
Randall Klein, from Lincoln, Nebraska, continues to defy the odds in drag racing, and we are glad he does. Despite being retired for a few years now, the grandfather of 13 continues to campaign a stunning 1956 Chevy Nomad throughout the Midwest. Klein has owned this classic car since 1972 (purchased for $600), and he began to drag race it in 1983. Over the years it has evolved through some different class configurations—including as a BBC 454, four-speed car—and currently is a bona fide legal SS/MA Super Stocker. The race car was built by Ron Meek, and the engine program (a relatively small 265ci small-block Chevy) was assembled by Klein’s longtime racing partner Ron Taylor (who races a 1957 Chevy in Super Stock). The engine employs an interesting and custom-made twin four-barrel tunnel-ram intake that was conceived and built by non other than the legendary Bill “Grumpy” Jenkins. Despite the car being more than a half-century old, Klein does employ some modern tech tricks, including a four-link rear suspension, A-1 three-speed automatic transmission, Dana 60 rearend, and Lamb disc brakes. The Nomad tips the scales at 3,600 pounds and runs in the high 10-second zone.

A 10.90 “TEN”!
Within drag racing’s 10.90 class, Michigan’s Scott Mackie’s 1966 Chevy II is a cut above the rest. His stunning-looking and show-quality model is one of the nicest efforts seen anywhere in the indexed category. After being rescued from its fate as a “bracket bomber” in Flint, Michigan, many years ago, Mackie tasked Mike Pustelny (MPR Race Cars) to build a new tube chassis underneath. This amazing-looking car is all steel except for the hood, decklid, and bumpers, and it uses its original safety glass. Mackie then dropped a 560ci all-aluminum Chevy engine between the framerails, which produces just over 1,100 hp. Unleashed, the car has run 8.38 e.t.’s at over 160 mph. However, that is not Mackie’s usual target. Instead, his focus is the NHRA Super Street index where his car is both consistent and one of the fastest in the category (normally hitting 150+ mph). The Chevy II received an intricate rotisserie restoration and then a (Scott Brown-designed) paint scheme, which was done by the Mancini Brothers (Oxford, MI). For Mackie, who is the president of International Brakes, the Chevy II is part of his family’s four-car Babaloo racing team, which includes his wife, Lucy (Super Comp dragster), and daughters Christina (14, junior dragster) and Kate (11, junior dragster).

Tom Huggins and his wife, Sharon, focus their attention on race weekends to an amazing-looking 1953 Corvette on the West Coast Nostalgia circuit. This A/G-classed machine, which burns oxygenated gasoline (VP Q-16) features a uniquely engineered 660ci Chevy engine that has a Pro Stock-style 4.900-inch bore spacing. Huggins, who ran Pontiac products extensively during the earlier part of his career (including stints in NHRA Super Stock and Competition Eliminator), applied all that experience to his innovative and self-built engine program. Charlie “Horses” Ulmer assists Tom and Sharon as the team’s crew chief and tuner. The 2016 racing season was Huggins’ third year racing the Tim McAmis-built Corvette, which for the most part targets NHRA’s Hot Rod Heritage Series circuit—a 7.60 non-electronics indexed class. Unchained, however, in fast grudge race mode, this Corvette has to its credit a best e.t. timeslip of 7.00 sec. at 195 mph.

All the Nickey boys knew about the car was that it was a ’56 Nomad, and they expected the typical “barn find” project.

We take a look at all the interesting cars scattered around the grounds here at the 2016 Goodguys Summer Nationals.

Check out our readers' rides for April 2013. These bow tie keepers include a 1967 Chevy Camaro RS, a 1964 Chevy Chevelle, and more! Want to see your ride in Super Chevy? Send us a high-res digital photo!

Mecum Anaheim 2013 is approaching quickly and this beautiful 1956 Chevy Nomad restomod will be hitting the block.

Check out John Bolsted's recreation of the Waldorf Nomad. Combines with the front end of a 1954 Chevrolet Corvette and a 1956 Chevy Nomad is a close match to the one John say many years ago. Only at www.superchevy.com, the official website for Super Chevy Magazine.

Check out Mike "Mad Dog" Dodson's 1956 Chevy Nomad which has a GM Performance Parts ZZ4 crate engine and a perfect two-tone black and white paint job. Only at www.superchevy.com, the official website for Super Chevy Magazine.