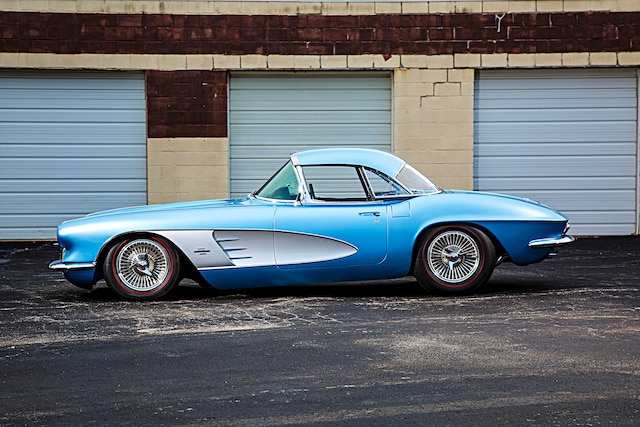 When you own a restored example of a Corvette built between 1955 and 1962, two things usually happen. One is that you develop a great passion for preserving such an iconic piece of American automotive history. And the other—if you actually drive the car—is you develop a strong appreciation for modern amenities such as electronic fuel injection to keep you going and disc brakes to bring you to a safe stop. As it turns out, this is exactly what happened to George and Kathy Lange.

The couple have owned a stock-restored Jewel Blue 1961 Corvette convertible for over 20 years now. They love the look and the originality of the car but when Kathy started to drive the ’61 on a more regular basis she quickly realized its inherent flaws when compared to most cars on the road today. That didn’t stop her from driving it, but eventually George said, “Let’s build you a more driveable version.” So that’s exactly what they did.

For a split second George thought about modernizing the all-original car but couldn’t handle the idea of “ruining” such a perfectly restored C1. The solution then was to find a not-so-perfect 1961 convertible Vette to start with. When George found a suitable candidate for modernization, he sent it over to the builder he trusted most: Bobby Alloway of Alloway’s Hot Rod Shop in Louisville, Tennessee.

Starting with the most important upgrade to Kathy’s Vette, they tore out the old chassis and suspension in favor of an Art Morrison Sport GT full chassis. If you aren’t familiar with the work of Art Morrison Enterprises (AME), this is a complete chassis that would give the C1 the perfect stance as well as modern ride quality and handling. At all four corners of the new chassis live Strange Engineering adjustable coilovers, and AME adjustable sway bars are each end. Out back, AME utilizes their triangulated four-bar rear suspension and a Ford 9-inch from Strange Engineering complemented by a centersection built by Currie Enterprises with 4.11:1 gears and a Posi. Alloway completed the chassis upgrade with a Wilwood brake setup of 12-inch rotors and four-piston calipers all around.

Mounted squarely between the framerails of the AME chassis sits a Chevrolet Performance 383ci crate engine making a solid 425 horsepower. Keeping it simple, Alloway left the long-block nice and stock but dressed it up with a Vintage Air Front Runner and PML valve covers. Feeding the 383 fuel and air is taken care of by a FAST EFI system and spark is handled by an MSD ignition to ensure day in, day out reliability. Keeping temperatures under control is a brass and copper radiator by Steve Long Custom Radiators of Indianapolis, while exhaust gases are expelled through Sanderson block-hugging headers that feed into 2 1/2-inch stainless steel pipes and out Borla mufflers. To ensure everyday durability, the entire system was ceramic coated by Performance Coatings.

Behind the 383 crate engine, Alloway decided to bolt on a Keisler TREMEC five-speed transmission to complement the 4.11:1 rear gear and also give the Corvette a low enough top gear to make cruising at highway speeds a no-brainer.

Now it’s time to talk about the pretty stuff—not that the chassis and drivetrain aren’t nice to look at—because boy is this 1961 Corvette gorgeous. It was Kathy’s job to decide on the paint for her soon-to-be-modernized C1 Corvette and the color she chose you might not expect. Up next to their Jewel Blue stocker, the paints look quite similar, but their origins are not. George would probably rather not admit this, but Kathy got her inspiration for the color from a 2007 Aston Martin DB9. The color is dubbed Glacial Blue by Aston Martin, and for this project was supplied by PPG. All the trim on Kathy’s Vette remained stock but was rechromed and cleaned up by Dan’s Polishing of Adamsville, Tennessee. The final detail left to complete the exterior appearance of the car was wheels. A set of midyear Corvette knock-offs were chosen to give the car a more modern, yet classic, look.

The real beauty of this Corvette is that it appears to be fairly stock at first glance but it’s the little things that set it apart.

Inside the cabin the subtle details continue. Kathy decided on a navy blue theme for the interior to complement the lighter Glacial Blue of the exterior. Alloway elicited the help of Steve Holcomb of Pro Auto Upholstery in Knoxville, Tennessee, to achieve the look Kathy wanted. Navy blue leather was used to cover the stock seats as well as the dash and door panels while the floorboards saw navy blue Daytona weave carpeting. Within the stock dash now live restyled C1 Corvette gauges from Classic Instruments. Steve also reworked the stock soft top, covering it in new cloth from Haartz.

When the car came back from Alloway’s, Kathy and George couldn’t be more pleased. Now they can take a 1961 Corvette out for a drive and not have to worry about its reliability and archaic driving characteristics. But more than it simply not being old, it is “an absolute work of art to look at every day,” according to George. Which, admittedly, presents a new problem of its own—now they are nervous to drive it because it’s too nice!

That hasn’t stopped them though. The couple routinely takes it out to get burgers on a warm summer evening and drive it to just about every show they can. Now they are “stuck” with two beautiful blue 1961 Corvette convertibles so it looks like they get to have their cake and eat it too.