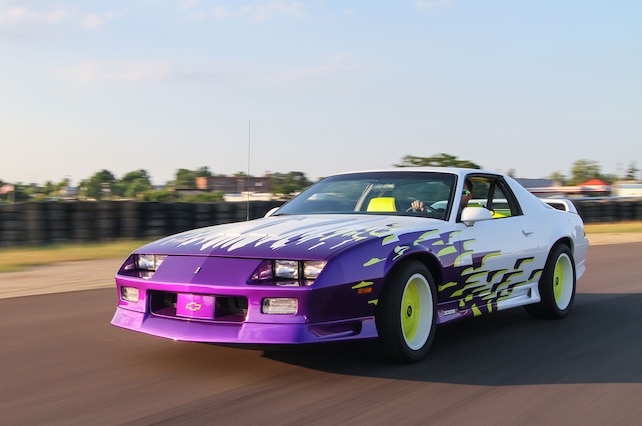 A long time ago in an auto industry far, far away, Jon Moss—Chevrolet’s former director of special projects—built creative, intriguing, and influential show vehicles that typically channeled equal parts Smokey Yunick and George Barris. The Caprice-based Impala SS of the mid-1990s started life as one of his SEMA show cars—and then Moss’ team built an El Camino-style version.

Among his other hits was a big-block-powered fourth-gen Camaro drag car that famously grudge-raced against a Ford-prepped Mustang. Moss’ team even stuffed a blower engine into a Geo Metro convertible.

There was another Camaro built under Moss’ direction that garnered attention in the early 1990s before slipping away into retired show car obscurity: a third-gen car fitted with the 1LE suspension and the LT5 V-8 from the C4 Corvette ZR-1. It was commissioned for the 1991 SEMA Show and with the ZR-1 still enjoying a wave of popularity, shoehorning its technologically advanced DOHC V-8 (designed in conjunction with Lotus and assembled by marine engine manufacturer Mercury) into a Camaro made all the sense in the world.

Moss plucked a 1988 Camaro development car out of GM’s Michigan proving ground and got to work on it. In addition to the 375hp LT5 and ZF six-speed transmission, the car’s suspension was changed to 1LE specs and it rode on 17-inch Speedline wheels wrapped in Goodyear GS-C tires.

It was all late-1980’s/early-1990’s fare, including the “Atari” purple-and-neon-green scalloped paint scheme that made it look like the official pace car of Reebok. The same went for the complementing interior trim—and it’s a good thing Oakleys were popular at the time because they were needed to view such a retina-searing combination.

After doing its job on the show circuit, Chevrolet tucked away the LT5 Camaro like an old Swatch watch. About a decade later, Chevrolet’s Camaro ambassador Scott Settlemire dusted it off like an old pair of acid-washed jeans and made it part of the Camaro Legends Tour. Camaro enthusiast Jason Harding saw it at the 2001 Camaro Superfest where it burned into his brain like an old Tiffani Amber Thiessen swimsuit poster.

“As a child of the era, I was immediately drawn to the wild paint scheme,” he says. “I was there with a 1982 pace car but had an ’85 IROC at home that I was doing an LT1/T-56 swap on, and seeing the LT5 under the hood intrigued me all the more, considering my project.”

The car went back into General Motors’ Heritage Collection, where Harding got another chance to see it again a few years later, before it was sold at the 2009 Barrett-Jackson Scottsdale auction. It was part of a significant lot of show vehicles sold off to raise cash during the company’s bankruptcy. The car was gone, but not from Harding’s thoughts and he figured the only way to move on was to build a replica himself. He started searching for project car in 2014, assuming he’d find an IROC-Z or perhaps a 1991-’92 Z28, but a genuine 1991 1LE popped up on Craigslist … and it was only three miles away.

“I drove it home because it was only three miles, but the car barely made it,” says Harding. “The fuel was crap and the car overheated. I later discovered a leaking heater core and brown sludge had replaced the coolant.”

His vision was to build it as a show car similar to how GM might build it today, using mostly OEM and restoration parts. The powertrain would be an LS3, albeit a finely dressed one, with a 4L60 automatic. The car would also retain as much of the original 1LE components as possible.

“I set up a spot in the garage and started stripping the Camaro right down to the body shell,” Harding says. “I removed every suspension part, chassis bracket, and brake component [and had them] stripped and powdercoated semi-gloss black, except for the brake calipers, which were powdercoated a color called Blasted Aluminum. The only non-original suspension parts are the trailing arms, Panhard rod, and BMR torque arm.”

The 430-horse LS3 itself is stock, but cranks out about 15 percent more power than the original, exotic LT5. It is dressed with Katech valve covers painted yellow, Katech coil relocation brackets, MSD wires, and Katech plug wire boot insulators. The air intake system is still the factory TPI snorkel to retain a factory appearance.

Hawks Motorsports engine mount brackets and fourth-gen engine mounts locate the engine in the third-gen chassis. A Holley oil pan provides crossmember clearance while the front drive accessory system for a 2010 Camaro includes the water pump, damper, power steering, and alternator. As a true 1LE, there’s no air conditioning to contend with. A Howell Engine Developments harness with a GM E38 controller runs the engine.

“A guy by the name of Pocket on the thirdgen.org forum makes harnesses for LS swaps and part of that is the harness for the gauges,” says Harding. “With this harness it was surprisingly simple to drive the OEM gauges, a feature I wanted to keep because I wanted to make it look like GM built the car.”

Hawks ceramic-coated LS swap headers feed a CORSA fourth-gen Camaro exhaust system, which fits the third-gen Camaro surprisingly well with almost no modification. When it came to the transmission, Harding called up RPM Transmissions for their entry-level 4L60E and a 2,800-stall converter.

The car was then sent to Kustom Creations in Sterling Heights, Michigan, for bodywork and the painstaking re-creation of the oh-so-1990’s graphics scheme. To get the shape and proportions just right, photos of the original show car were sent to a graphics company to create a vinyl mask, which was applied in stages to replicate the overlapping elements.

“It was a taping and painting nightmare, which took a lot of time and effort,” says Harding. “For the colors, I absolutely loved the original, but I wanted to turn the saturation up a little, so I selected House of Kolor Hawaiian Purple Pearl and Neon Yellow for the graphics.”

Ronal R15 replica wheels from Hawks were selected because they look just like those on the original show car. They were painted white and neon yellow, like the originals, and wrapped in BFGoodrich g-Force Sport Comp 2 tires.

Inside, fresh carpet and a number of additional resto parts complement the seats from a fourth-gen. They’re more comfortable and are easily swapped into a third-gen. When it came to matching the nuclear yellow hide of the original show car’s seat trim, Harding searched far and wide for material before turning to Vaughn Custom Sports, a manufacturer of hockey equipment. No kidding.

“On Facebook they posted a set of goalie pads with the exact color I was looking for and they sold me a few yards of the material,” says Harding. “What could be better than the ultra-durable leather for goalie pads!”

He sent it off to Lethal Interiors to have the new seat covers made, and wrapped up the interior trim by sending the steering wheel, shift knob, and parking brake knob to Caravaggio in Canada to be retrimmed in black leather with neon yellow stitching.

Harding’s tribute is a faithful and fun nod to one of Chevrolet’s most unique show vehicles. His attention to detail would undoubtedly make Jon Moss proud—and very possibly Tiffani Amber Thiessen, too.

Jessie Coulter built this 1991 Chevy Camaro on a budget. It was originally just a commuter car until testing it out at the 2013 LS Fest.