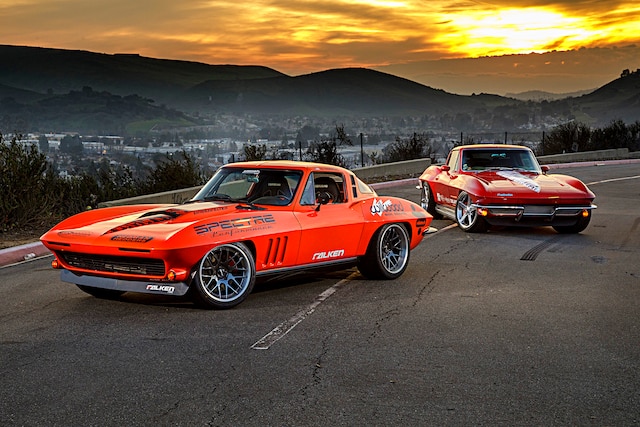 There is no other American-made automobile like a Corvette. A Corvette delivers above and beyond, providing everyday transportation as well as propelling its owner into experiencing an exciting lifestyle that intensifies with the passage of time.

Take, for example, Greg and Jane Thurmond of Simi Valley, California. The couple met when Greg was 22 and Jane was 17. Jane grew up in Los Angeles and spent her summers on Newport Beach’s Balboa Island. Jane recollected to Vette a summer day on Balboa when a 1968 Corvette caught her eye and from that point on she dreamt of owning a 1968 Corvette.

Greg grew up in a gearhead family, attributing his father’s many Corvettes and L88-powered flatbottom boats to turning him into a Corvette guy. “My dad was always building and painting something in our garage as I was growing up. I learned to paint at an early age as well as turn wrenches. I had a mini bike that had to be worked on as much as it could be ridden.” From there Greg graduated to a high-horsepower ’69 Camaro and devised ways to make it handle faster through the Santa Monica Mountains.

“Then came Jane. I was about 22 when I met Jane who would turn out to be the love of my life. She was 17, tall and gorgeous. We met at a pizza place where she worked and after getting her phone number and having some conversations with her she really caught my attention. She loved cars and toys with motors as much as I did. We were both motorheads and she was a perfect match for me. Soon after talking on the phone I asked Jane out for donuts. She might have thought I was talking about the kind you eat, but that was not the case.

I took her for a short drive in my ’69 Camaro and found a quiet neighborhood where I burned donuts until we were both dizzy. She was laughing so hard and we had the best time. Before long, Jane had moved in with me and we were doing lots of fun stuff together. She sold her own car to help me go racing, which meant my ’69 Camaro was now hers.”

Greg said, “It was around 1985 when I found a great deal on a basket case 1968 Corvette convertible. At this time I was working for my dad at his auto upholstery shop. We had all the means for restoring and rebuilding just about anything. The ’68 convert was in rough shape and Jane looked at me kind of funny when I asked how she liked her new car. But within a few months I had it looking and running great. I painted it white and put a black Stafast top on it. Talk about a Barbie car with a Barbie driving it, too. Jane drove it for a few years until it was time to buy our first house. We sold the ’68 for the deposit and bought our first home, had our first kid and we were living the American dream.”

It wasn’t but a few years after getting the home front firmly established that Greg and Jane opened their own business, Outrageous Paint by GTS Customs, with Greg doing restoration and collision work. Having grown up with Corvettes and apprenticing with his dad since age 13 it was no surprise Greg started taking in a noticeably higher percentage of Corvettes than the other shops specializing in high-end custom paint and bodywork. There was a string of customer’s frame-up customized Corvettes leaving the GTS Customs premises before Greg came across another Corvette to build for Jane.

This time it was a 1964 Sting Ray coupe roller basket case located in Crestline, California, a quaint little alpine community located high in the San Gabriel Mountains. The price was $10,000 and Greg didn’t waste any time reconstructing Jane’s ’64 from the ground up.

There wasn’t any question what Greg was going do regarding the chassis for Jane’s ’64. Using the company previously for client cars, he looked to Newman Car Creations to adapt the IFS and IRS from a 1996 C4 Corvette to the ’64’s original frame. Made in-house by GTS Customs are transverse-mounted RideTech shocks with an adjustable cantilever design. The standard C4 fare front spindles and forged aluminum upper and lower control arms were equipped with Wilwood 13-inch disc brakes tucked behind fully polished C5 Corvette wheels shod with 315/30-18 Falken Azenis RT615K+ tires. North Hollywood Metal Polishing was the source for all polishing.

Under the hood lives a 2003 5.7-liter LS1 thanks to Newman Car Creations adapting LS motor mounts while the chassis was in Templeton, California. Quarter Mile Performance did the machine work, and then the balanced and blueprinted engine components were assembled in-house at GTS Customs using AFR cylinder heads on the top end, and a Howards Pro Series 4340 crankshaft for the bottom end. An LS6 intake with stock LS6 fuel injection handles fuel delivery via a Walbro in-tank mounted electric fuel pump. The cooling system charged with handling racetrack conditions is a four-row BeCool aluminum radiator in concert with Messier oil cooler mounted behind a stock ’64 Sting Ray grille. Gear changes take place via a TREMEC SSR/T-56 six-speed transmission with a Centerforce 11-inch DYAD clutch.

The original idea for Jane’s Corvette was for it to be for show and go, but those plans changed about halfway through construction with the results ending up Jane’s ’64 a race car built to show quality standards. While the ’64’s stock frame was at Newman Car Creations for the C4 suspension bits Greg addressed the bodywork. What Greg discovered was the nose had been punched hard so many times and each hit followed with a poor quality repair that it was best to graft on a new front clip. A call to J&D Corvette in Bellflower, California, and a fresh nose was readied for pickup. It’s interesting to note that J&D Corvette has been in business since 1958, and has been Greg’s go-to place for Vette parts over 30 years. In the rear, to accommodate the wider Falken tires and match up with the track of the Newman chassis Greg ’glassed on a pair of GTS Customs 1-inch increase rear quarters. The paint Greg sprayed over a gray resin sealer was BASF Diamont Victory Red urethane followed with a color sand and rubout.

The interior features pair of Corbeau R4 black cloth-weave bucket seats fitted with a G-Force five-point safety harness. The center console is stock 1964 Corvette issue with a Pro-Shifter shifter. GTS Customs upholstered the rest of the interior including GTS Customs’ door panels in tan and red leather. The Dorsett carpeting is tan, fine-tuft velour. Weston Thurmond installed a Sony head unit with Focal speakers to provide the sound system. A stock 1964 Corvette steering wheel faces Auto Meter full instrumentation. If you are starting to get the picture that Jane’s Corvette is set up as a serious race car you’re right. In Jane’s words, “I’ve been racing autocross and big track for a few years now, and I have had some amazing experiences.”

Ten years or so after Jane’s ’64 was completed Greg found the Corvette he wanted to build for himself. The premise was two-fold, purpose build for autocross and to promote GTS Customs as a Corvette specialist. A friend of Greg’s named John contacted him to help evaluate a 30-plus collection of derelict Corvette basket cases for the daughter of a deceased Corvette collector. “There were about 30 Corvettes in all. I thumbed through the portfolio of photos and pink slips and a particular ’65 Sting Ray caught my eye. It had spent 30 years sitting outside in the desert sun after the original owner had modified it from a stock configuration to be a gasser.

Greg informed John, “it’s worth about $5,000 and I want it. It was in bad shape, no engine or transmission, no front body section, part of a leaf-spring straightaxle front suspension was intact. It was a perfect project car that I could afford. As luck would have it they found a buyer for the entire collection and John pulled the ’65 aside unbeknownst to me until one day he rolled up to the shop with it on a trailer and said it’s yours for $5,000.”

There wasn’t a lot more to Greg’s ’65 coupe than a totally fried body shell from the firewall back and a California pink slip, but that was plenty enough for Greg to build his ’65 Vette on a budget. Greg looked to his friend Rob MacGregor of No Limit Engineering fame to help arrange industry contacts to build the ’65. The first step afterwards was to contact J&D Corvette and get a shop discount on a complete front clip.

The IRS carries a Ramjet Dana 44 differential with 3.53:1 gears and limited-slip. A Wenco aluminum driveshaft distributes power from the transmission. Unique to this car, and of Greg’s own design, there’s a 6061-T4 aluminum adjustable rear suspension utilizing transverse-mounted RideTech coilover shocks with cantilever rockers incorporating eight quick-change wheel-to-shock ratios, and a custom torque arm. Rolling stock and brakes all around are Forgeline wheels shod with 315/30-18 Falken Azenis RT615K+ tires and Wilwood 13-inch disc brakes. The ride height was dropped 4 inches from stock.

The interior, starting with seats is a pair of black Corbeau Forza Sport buckets outfitted with a DJ five-point safety harness. Door panels and etc., are leather, heavily accented with carbon fiber with black Dorsett carpeting. GTS Customs’ Scott Dinger fabricated and welded the rollcage, and Tommy Clyde Hopper played an important role doing assembly work. The gauges are Auto Meter and the odds of baking a Corvette charcoal surprise are drastically reduced thanks to a DJ Safety onboard three-point fire extinguisher system.

Now that Greg and Jane both have show and race prepped Sting Rays they are deeper than ever into the Corvette lifestyle. Currently, when Greg and Jane aren’t running the family Corvette specialty and autobody business, or Jane isn’t active sitting on SEMA Businesswomen’s Network, on active with SEMA’s She Is campaign they’re off to the races every time there’s an opportunity. The most recent being May 5-7, 2017, at the inaugural Holley LS Fest West event held at the Las Vegas Motor Speedway.