Supercharged, 600hp 1963 Split-Window Has What it Takes

Getaway Car: In an overexposed world, relief comes 600 hp per dose for this lucky—and anonymous—driver 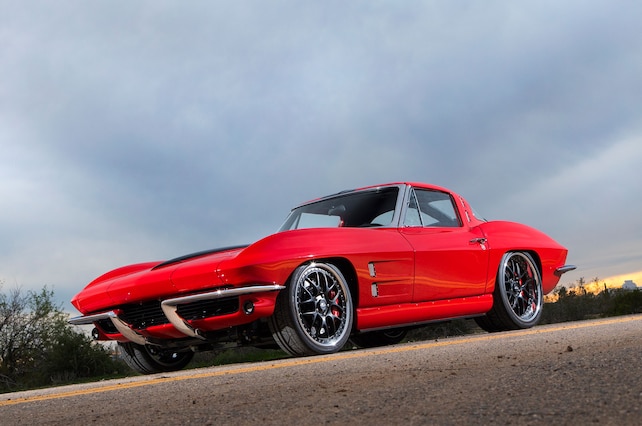 If there’s a consistent rule among us enthusiasts it’s this: we love the exposure. Who among us wouldn’t shout from the mountaintops that we owned this coupe? But for every rule there’s an exceptions. And this is one of them.

This 1963 split-window is someone’s getaway car. Whose getaway car we’re not at liberty to say. It’s a means for its owner to escape almost certain exposure, so privacy is paramount.

“My father had a Corvette when I was growing up that was nothing but trouble,” he begins. “I wanted something special that wouldn’t let me down.” He reveals his affinity for the 1963, specifically. “I always loved the split-window,” he explains.

The candidate turned up in the form of a numerically incorrect coupe, the right example for a speedy, guilt-free build. Tony Arme, Gregg Grisham, Jonathan Williams, and Charlie Sullens oversaw that transformation.

They dispensed with the antiquated chassis for a more modern Roadster Shop Fast Track unit. It consists of the company’s panel-formed framerails. The front suspension uses Z06 knuckles and hubs but one-off tubular control arms sized and mounted in a way to achieve an aggressive camber curve.

Roadster Shop built the IRS around Strange Engineering’s interpretation of the venerable Ford 9-inch design. This one features a 3.73:1 cog mounted to Strange’s version of the Trac-Lok limited-slip gear carrier. Those in turn spin 31-spline stub flanges. The rear suspension also differs from GM’s in its four-link design, a configuration that offers greater tuning capacity than the standard trailing-arm setup.

Both ends wear 14-inch Wilwood rotors gripped by six-piston calipers up front and four-piston rears. Each corner has its own RS-series Penske monotube, coilover damper. A set of Billet Specialties Grand Prix wheels finish off the chassis. They measure 19x8 and 20x12, each with 6 inches of backspace. They mount 235/35ZR19 and 345/35ZR20 Nitto Invo tires. There is a splined 1 1/4-inch antiroll bar up front, as well.

Inspiration for such a robust chassis came in the form of GM’s latest LT1 engine, the version native to the C7. Only, 465 lb-ft and 460 hp weren’t quite enough so the crew breathed on it with an Edelbrock E-Force supercharger. Equipped thusly, it twists out some 576 lb-ft at 4,800 rpm and 594 hp at 6,500 … at the wheels rather than the crank where power comes easier (and where GM derived its specs). The LT1 is bolted up in front of a 4L70E transmission.

“Chevrolet didn’t bother to finish the back of the engine because it sits right against the cowl in the Corvette,” Tony Arme reveals. “That makes a huge gap between the engine and the 1963 cowl so we made a filler panel to close it off.” They also retained things like the stock manifolds and heat shields to maintain a factory feel (and the power figures suggest it doesn’t impose any real-world penalty, either). “We made panels to hide a few things on the inner fender panels but we left some things out in plain view to maintain kind of a factory feel,” he adds. The exhaust gasses pass through a pair of 50-series Flowmaster mufflers. Only this pair is now one after Gregg Grisham cut the adjoining walls and welded the two together. “We were really worried that it would screw with the sound but it didn’t,” Arme noted. Greg gave the assembly a factory feel by welding C7-series exhaust tips to the outlets. The muffler’s location meant the crew had to cut the area just below the license plate for the tips to emerge.

The body remains largely stock save for some vents made from aluminum stock with stainless mesh and fasteners on the hood, the cowl and the sail panels. Formed aluminum rocker panels replace the ribbed rocker inserts. Rain isn’t much of a threat in Arizona so they removed the wiper assembly and shaved the bosses. They also shaved various badges from the body and replaced the front turn indicators with anodized-billet velocity stacks, each with its own mesh screen.

Joe Perkins at American Tradition in Mesa, Arizona, shot the coupe in a PPG formula of GM’s Victory Red. Per Arme’s instructions he replicated the stinger stripe, carrying it to its logical conclusion at the back of the tapered bustle.

Glenn Kramer at Hot Rod Interiors by Glenn in Phoenix wrapped the entire interior in black leather and suede. He reshaped the seat inserts for an aggressive brick pattern and punched it with stainless grommets, each with a stainless mesh backed by red leather. He also wrapped the dash, using the same French-seam motif that he used on the rest of the interior. He also clad the floor in Wilton wool carpet.

Kramer re-covered a Billet Specialties Formula D-shaped wheel in the interior’s leather with a red apex stripe then mounted it to an ididit column. Classic Instruments made the gauges in a late-model likeness with the Corvette flags. Kramer also made a suede boot for the Lokar shift stalk protruding from the tunnel. A Parrot joystick behind it controls an MKi9200 head unit in the center console. Tony Arme and Gregg Grisham made the provisions for the rest of the Rockford Audio system, a network that includes a five-channel amplifier which drives two 5 1/4-inch component sets in the dash center, two more in the sail panels, and a 12-inch R-2 subwoofer in the cargo area.

Some may find it a little strange or maybe even self-important that this car’s owner would want to remain anonymous. But after attending car shows in corporate magazine shirt, even I can testify to the value of a little anonymity in our overexposed world. Regardless of what anyone else thinks, as long as he’s willing to share his car with us, I say he’s okay by me.