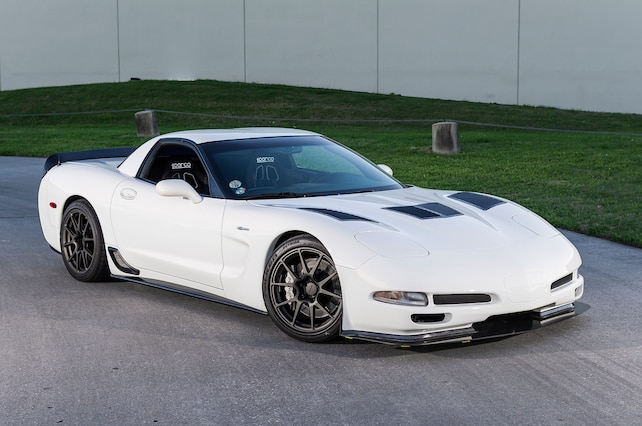 One of the biggest trends in our hobby over the past decade has been to make cars that handle like crap from the factory actually stick and go around a corner. That is usually a very labor-intensive and expensive process because, let’s face it, most American cars from back in the day simply didn’t have “handling” in their vocabulary. But there is one model designed and built in the USA with an edge over the competition: the Corvette.

Tim Palazzolo, owner of GAP Racing, had an inkling that a Corvette might be the way to go when he started looking into purchasing a car to compete in autocross and road race events. So instead of starting from square one with an old land yacht, he purchased a Speedway White 2001 Corvette Z06. He found the car online in July 2016, and had a transport truck go pick it up—sight unseen—from Dallas and bring it back to his shop in Cypress, Texas.

“I was a little nervous when the car showed up but to my surprise it was just as advertised,” said Tim. It was a 48,000-mile, one owner and completely stock C5 Z06.

Before diving into heavy modifications right off the bat, Tim took the Vette out to Circuit of the Americas and entered it in Optima’s Ultimate Street Car competition. “It performed really well and from that point I was hooked,” recalls Tim.

He promptly began modifying the car so that it could perform at a more competitive level in the Optima events and, being the owner of GAP Racing, Tim had some help when it came to rebuilding his C5 Corvette. His shop manager Casey Stump had a hand in every part of the upgrade process.

The first order of business was to improve on the car’s inherent strengths: the suspension. Vansteel provided everything Tim needed to make his Corvette even more of a beast in the corners, starting with a double-adjustable coilover setup front and rear from JRi Shocks. To reduce unwanted compliancy in the suspension, they replaced the stock bushings with Delrin bushings and the stock sway bars with upgraded units from Vansteel.

Next up, it was time for a brake upgrade to minimize unsprung weight and maximize heat dissipation. Tim went with Wilwood Aero6 six-piston calipers in the front and Wilwood Superlite 4R four-piston calipers in the rear. The rotors up front are about the size of an extra-large pepperoni pizza, measuring 14-inches in diameter while the rears are a bit smaller at 12.88 inches.

To complement the new suspension setup, Tim went for a set of Forgeline GA1R wheels, 18x11s all around shod in 315/30R18 Falken RT615K tires. With a wheel and tire setup this aggressive, tramlining can be a serious issue so Casey and the guys at GAP Racing installed a Baer Brakes bumpsteer kit up front and LG Motorsports bumpsteer kit in the rear of the Vette.

While the suspension was blown apart, the engine also got a reworking of its own. GAP Racing pulled the stock LS6 and made a few key modifications to optimize it for track work. They upgraded the heads to aluminum Texas Speed PRC stage 2.5 units and added strength with ARP studs and 7.400-inch Brian Tooley Racing pushrods. The stock cam was swapped out for a higher performing G5X3 model from LG Motorsports with 0.600/0.610-inch lift and 232/240-degree duration at 0.050-inch lift. Katech aluminum valve covers protect the LS7-sourced lifters, and sitting between the Texas Speed heads is a FAST 102mm LSXR intake manifold sucking air in through an Airaid LS7 cone filter.

A Ron Davis aluminum radiator keeps it cool under the hood along with an LS2 water pump. The exhaust gases are taken care of by LG Motorsports 1 7/8-inch to 3-inch headers, custom 3-inch stainless steel piping fabricated by GAP Racing and Black Widow Widowmaker mufflers. This combination of performance parts boosts the Corvette’s LS6 peak power output from a stock 385 horsepower at the crank to 471 horses at the wheels. Behind the LS6 remains the stock MN6 six-speed transaxle but with the clutch upgraded to an LS7 unit.

The outside of Tim’s Vette is reasonably subtle, but the standout feature is the Speedway White paint, an option that only 352 of 5,773 Z06s wore in 2001. Tim couldn’t leave the car completely stock appearing though, so he made a few personal touches to set it apart. “I wanted to add some carbon accents but I did not want it to take away from the rest of the vehicle,” Tim says. Some of those carbon-fiber bits include an Advanced Composites front bumper, Tway Motorsports carbon splitter, Track Spec hood vents, and a carbon-fiber rear diffuser.

Inside the cabin, Tim decided to add a little more flavor to his Corvette. He had GAP Racing swap out the stock lounge chairs for Sparco Evo II racing seats and five-point harnesses to keep him in place on the track. They also installed a smaller-diameter leather-wrapped Sparco steering wheel for more precise control. To bring the C5 into the modern age, they mounted and wired an iPad Mini into the dash, which controls the stereo and other functions.

The build went by in a flash and in just three weeks the Z06 was ready to hit the track again. Tim entered the car in the next Optima event so he could to get a feel for what it could do. “We placed second in our class and that was pretty cool because of how quick we made the transformation,” said Tim. They competed with the Vette for the rest of the 2016 season with good success, but as project cars often go they didn’t plan to leave it in its current state for long. In fact, as this feature is being written, the guys at GAP Racing are having Late Model Engines in Houston build a new 14:1-compression 417ci engine for the Corvette.

Tim and his Z06 are off to a solid start, but you’ll just have to keep your eye on Optima’s Search for the Ultimate Street Car competition to see what he does next.