Oldest Production Corvette Frame in the World: How the 1953 VIN #003 Frame Was Found and Became Part of a Cutaway Corvette 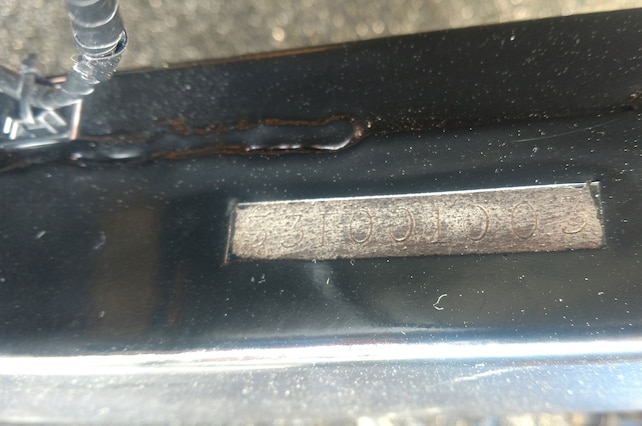 “When I looked at the VIN (actually, the last nine digits of the VIN that is stamped in the frame), I almost fell over,” Kevin Mackay said.

Decades earlier, Mackay remembered reading a story in The Corvette Restorer about a guy that pulled a body off a 1955 Vette and found #003, actually the last nine digits (53F001003) of the 10-digit VIN (E53F001003) stamped in two separate places on the frame.

In 2012, over 35 years had elapsed and, apparently, the same guy, Phil Havens, an attorney in Florida, still had this frame and he put it up for sale on eBay. We called Havens and asked him what he thought when he pulled that 1955 body off its frame in the mid-1970s to find #003.

Havens surprised us when he said, “I was devastated. That’s the truth. I bought a pile of parts that was a 1955 Corvette. And when I first lifted the body off the frame, there were things that didn’t fit.”

Havens referred to holes in the floorpan and unusual brackets. He called his friend Sam Folz, then president of the NCRS, in nearby Kalamazoo, Michigan, and said, “This frame doesn’t fit the body. I need some help.”

Havens figured he had a passenger car frame under a Corvette body. Folz verified the frame was Corvette, but not a 1955. It was a 1953 with “some unusual stuff on it.”

Folz was actually the one in for a big shock when he saw 53F001003 stamped into the frame. Havens told us what happened, “While I’m standing there with my face fallen, Sam said, ‘This car is supposed to be in California.’”

About this time, there had been a contest to find the oldest Corvette. People sent tracings of their VIN and the oldest Vette sent in was number #003, owned by Ed Thiebaud of Fresno, California.

Havens wasn’t a collector and still planned to use the #003 frame in his 1955 restoration. He had spent $4,600 already and did not have the funds to pay the going price of $1,500 for another frame.

Folz and his NCRS historians, however, wanted to “study” this frame. When Havens resisted, Folz said he would find a 1955 frame at an affordable price.

Havens, in the meantime, sent a letter to Thiebaud with an offer to sell the frame for $1,500, enough to buy a 1955 frame. The letter bounced back for unknown reasons.

“He said go down to Brooklyn, Michigan. I was in Lansing at the time. You’re going to meet a guy named Bob Donahue. Donahue was an NCRS guy, one of the officers of the NCRS at the time. And I had joined the NCRS just about then because I was looking for parts. Donahue owned Donahue Chevrolet in Brooklyn. He was pretty well retired by the time I met him, but over the years he had collected Corvettes, as they were traded in on new cars. If a good one came in, he would take it home and put it in a building.”

Havens was shocked when Donahue showed him what was left of a 1955 that had been raced and rolled: a front clip, floorpan and frame; the latter undamaged, but rusted from laying out in the rain.

The NCRS took photos of the 1953 frame for history. Havens says, “Shortly after that the car #003 came up for sale. He wrote Thiebaud a letter and got a letter back from a lawyer saying they would let him know when the car was for sale. But, somebody else purchased #003.

Six to seven years ago, Havens listed the frame on eBay with a high reserve. He got a bid of $100,000, but did not sell.

Havens said he didn’t want to get in the middle of a squabble if somebody bought the frame and tried to claim this was car #003. Then, about three years later, he put the frame back on eBay. This time, he agreed to sell to Ed Foss after he saw Ed’s museum and found out he was going to show the frame as a frame, not to make a car out of it.

Mackay had approached Foss with the idea of taking a 1954 parts car and utilize the historic #003 frame in a cutaway Corvette, something Mackay is known for. Mackay’s Corvette Repair in Valley Stream, New York, had already wowed the hobby with many of these novel attractions, including a 1967 427/435 driveable chassis, a suspended body exhibition with a detailed chassis underneath (like a bunk bed); in both a 1966 425 coupe and a 1967 435 convertible, a cutaway 1968 L88 convertible, a 1969 L88 see-through Corvette, a 1965 see-through coupe and a 1971 ZR2 “sideways” Corvette.

Any one of these display type Corvettes would be an entertaining format to show this earliest production Corvette frame in the world. Foss was enthusiastic and it was his idea for Mackay to cut the body in half to expose the VIN on the right side of the body, keeping the car fully driveable.

The cutaway body showing the oldest production Corvette chassis in the world was a big hit at its coming out party at Amelia Island in March, 2017.

(Editor’s Note: Vette magazine will have a full feature coming in the next few months on the #003 chassis with the cutaway body resting on the famous rails. Stay tuned … it should be fun.)

The entire VIN is stamped into the frame in two different locations. The #003 frame rested against a garage wall in Florida for about 30 years. Kevin Mackay’s friend and famous vintage car law attorney and historian Bryan Shook explained with the early 1953 Corvettes “it was fairly common at Chevrolet at the time to replace frames and bodies on these cars and then just rebuild the car within Chevrolet Tech Center or Engineering. Therefore, they didn’t have to buy a new car for themselves, each time they wanted to make a change. Mackay actually found the GM work order dated August 20, 1953, to pull the #003 frame from the #003 body. So, Engineering put a new frame underneath car #003 to continue with testing and development.

Do you have or know of a Rare Find? Or vintage photos? Contact Jerry Heasley at jerryheasley@gmail.com or on Twitter at @JerryHeasley.