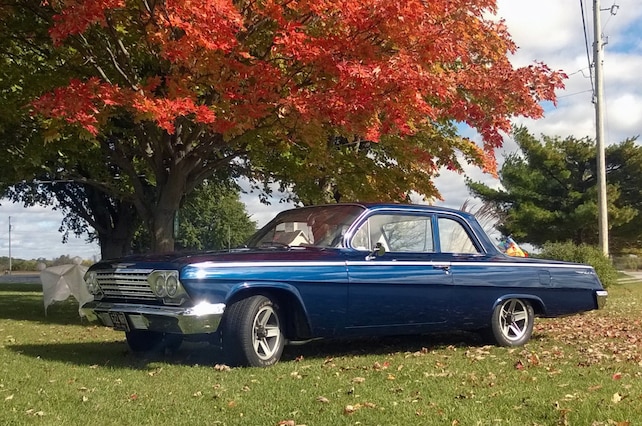 Most of the time, being the only gearhead in the family is no fun, but in the case of Tom Pettit of West Jefferson, Ohio, that just meant he was the only one who wanted this 1962 Chevy Bel Air when the in-laws were trying to find it a new home. After taking possession, Tom had the car painted then swapped out the old 235ci six-pot for a 305ci Tuned Port Injection V-8 from an ’86 Camaro Z28 along with a 700-R4 transmission. Now he’s got a solid driver that he enjoys taking to local cruise-ins and surprising the locals with what’s under the hood.

This black on Synergy Green 1967 Nova was a team effort, built by Mike Riha and his son Eric along with help from a couple of local shops. The build started with upgrading the handling with a coilover independent front suspension and a four-link out back from TCI Engineering. Power was taken care of by a rebuilt 5.3L LS engine backed by a TREMEC TKO 600 five-speed transmission. A Ford 9-inch lives in the rear, housing a 3.00:1 rear gear making their Nova ride like a dream on the highway.

Terry Naughtin’s 1963 Corvette competition lightweight Grand Sport is no joke. The car was built to race but is now licensed and street legal, even with its 4-inch all-tube chassis. Terry’s Vette is powered by a period-correct 427ci big-block Chevy and BorgWarner four-speed transmission. With the combination of lightweight materials such as the tube chassis, Plexiglas side windows, and aluminum seats means this Corvette only weighs 2,160 pounds. Not bad for a “street car.”

When your dream car gets stolen then a popular rap song renders a replacement out of financial reach, do what Alec Kiln did and build something even better. This all-aluminum 409-powered 1962 Chevy Bel Air bubbletop is a piece of American muscle worth settling for.

After quite a few incarnations, this 1962 Chevy Bel Air now has a robust LS engine for plenty of power and modern suspension for amazing driveability.

Turning a hobby into a career is a beautiful thing. It also yields beautiful cars such as this 1962 Chevrolet Bel Air built by Angus Priester.

Check out Randy and Lisa Wilcox’s 1962 Bubbletop That Took Home the 2015 Barrett-Jackson Cup!

This pair of 409-powered 1962 Chevys are an ode to a child of the '60s. Check out Larry Frederick and Mick Price's Bel Air and Biscayne!

With its brilliant yet subtle hue and rare crate engine under the hood, Dennis Wellbrock’s 1962 Chevrolet Bel Air has as much brawn as beauty.