Alloway’s 1963 Corvette Was Built to an Uncompromising Standard 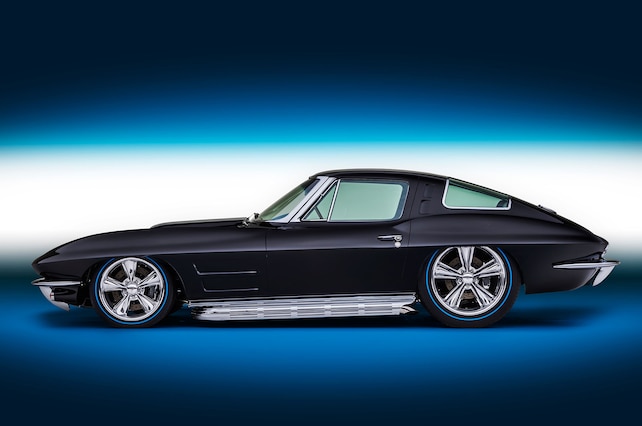 It’s a reverse take on the golden rule: Build a car for yourself as if you were building it for someone else. And that’s exactly what Bobby Alloway of Alloway’s Hot Rod Shop in Louisville, Tennessee, did when he decided to hot rod his 1963 Corvette split-window coupe.

The impetus for Bobby’s project came from a 1963 Corvette split-window he had customized for a client. “We’d built one a few years back for Larry Olson, and I liked it so much that I wanted to build one for myself.”

Travel back in time a few decades; the Ermine White split-window Corvette Bobby started with was local to the Knoxville, Tennessee, area and it had a few of the flaws a car subjected to numerous Knoxville winters one might expect. The driprails were rusted out completely, but all in all it was an unmolested example with its original fiberglass body intact. The car had never been molested or in an accident.

It took several visitations to the ’63 before Bobby decided he was going to buy it. The selling price was $25,000 and that was top dollar for a split-window Corvette at the time. People that have been around Corvettes for many years will remember when a ’63 split-window was the least desirable of Sting Rays. In the late ’60s folks used to convert split-windows with a ’64-up one-piece rear window kit.

It should be mentioned that Bobby Alloway is a hard-core Corvette guy from way back and continues to harbor a stable of Corvettes. For the longest time his future plans were to restore this car, but weighing the equal expense of restoring versus hot rodding with a hot rod worth more at completion, the hot rod approach won out.

Bobby’s ’63 Corvette was stripped down to its barest elements: the body shell, hood and doors were sent to Strip Technologies (Knoxville, Tennessee), a trusted mediablaster for soda blasting. This work has to be done by a qualified mediablaster or the body lines formed in fiberglass will be blown away. Upon its return to Alloway’s shop the next phase was to spot TIG-weld new driprails to the birdcage and properly sand the body in preparation for a sealer. The sealer is the only paint product not sourced from PPG. It’s from Clausen, and called Z-Chrome Rust Defender, a high-build non-shrinking polyester primer fortified with zinc chromate to resist rust (think birdcage).

Among the many steps required for absolutely flawless bodywork, the split-window body shell was tightened down snug to the Art Morrison Enterprises (AME) chassis ensuring all the gaps lined up afterwards and then block-sanded exhaustedly until it was laser straight. Moving forward it was PPG products exclusively, from the Alloway Jet Black basecoat to the PPG clearcoat. In addition to Alloway’s longtime painter Scotty Troutman shooting the body from top to bottom in PPG Alloway Jet Black, the stinger hood was shot in PPG Le Mans Blue, paying homage to the four Tuxedo Black 1967 Sting Rays factory optioned with a bright blue stinger.

Uncompromising attention to detail extends to the rolling chassis and powertrain. The basis for every car Alloway’s Hot Rod Shop constructs, no matter which emblem is on the hood, is an AME chassis. That’s where Alloway’s signature nose-slammed stance with big meats in front and super-big meats in the rear begins. In front, bespoke 17x7 Billet Specialties Alloway five-spoke mags are mounted in 215/45/17 Toyo Proxes tires, and in the rear, 20x10 Billet Specialties Alloway five-spoke mags hold 295/45/20 Toyo Proxes tires inside extra-wide tubs.

Braking power is delivered through an un-boosted Wilwood master cylinder suspended from a stock ’63 Sting Ray pedal trap connected to a quartet of Wilwood six-piston calipers on 14-inch rotors. The rear suspension is a triangulated four-bar with Strange Engineering adjustable coilovers on a Currie 9-inch with 4.30 gears, 31-spline axles and limited-slip. Up front, to accommodate the large hooped deep-dish wheels, with extra-wide tires and slammed nose that Bobby likes, it requires Alloway’s Hot Rod Shop to move the parallel front framerails 4 inches closer together. The 4-inch squeezed front ’rails allow for DSE spindles to maintain a tighter turning radius while driving low.

Muffled by factory side pipes, Barillaro Speed Emporium was the source for custom-bent stainless steel headers, and the ignition is an MSD distributor with Taylor wires. For cooling, Steve Long Radiators of Indianapolis custom-built a heavy-duty brass/copper radiator.

As with all cars built by Alloway’s Hot Rod Shop, there’s a massive amount of highly polished aluminum and custom chrome plating on Bobby’s split-window, and, as always, Dan’s Polishing and Chrome of Adamsville, Tennessee, did show-quality work.